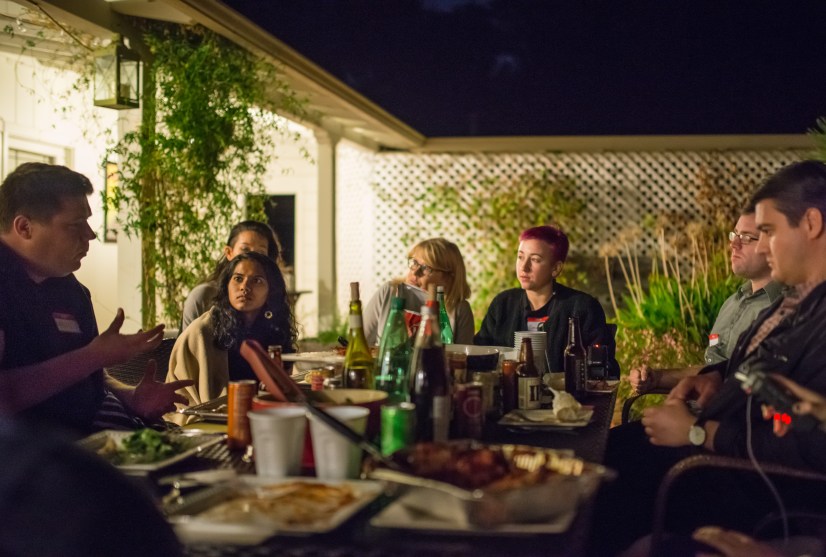 Guests gathered in the Bay Area for a potluck and political conversation. J.T. Trollman

It’s that time of year when we gather with family and friends to share a meal and catch up, swap stories, and perhaps, if your family is like mine, steer clear of talking about Donald Trump over our turkey dinner.

But while some of us want to avoid politics at mealtimes, others across the country are looking to dive right into them. I recently went to a potluck hosted by Make America Dinner Again, a project where people of different perspectives come together to share food and engage in uncomfortable political conversations. Listen to my story about the experience on Bite podcast below—the segment begins at 10:45.

Here’s how Make America Dinner Again’s events work: Anyone can sign up online, supplying their age, location, political affiliation, and any details they think may inform their perspectives. The group’s founders Tria Chang and Justine Lee find a willing host, split people into groups of 8 to 10, and set a date.

At the dinner parties, attendees are given ground rules, such as “No interrupting,” and are encouraged to “use I statements.” They also participate in guided activities drawn from conflict resolution resources such as the Sustained Dialogue Institute and the National Council for Dialogue and Deliberation. So far, Make America Dinner Again has hosted six dinners in the Bay Area and one in Brooklyn.

A few weeks ago, I joined one of these dinner parties in Lafayette, a community just outside of Berkeley, California. Dario Mutabdzija, a tech entrepreneur born in Serbia who identifies as a libertarian, hosted the dinner on his brick patio. Jan Coplick, a professional mediator from San Francisco, acted as the dinner’s facilitator. After all seven guests arrived, Coplick split people into pairs and gave them the task of making mini apple pies and finding three things in common with their partner.

After the ice breakers, guests moved outside to munch on margherita pizza and spinach lasagna while Coplick tossed out conversation starters. She encouraged guests to open up about their political worries and fears, and address someone they knew who had beliefs different from their own.

“It’s great that these sort of conversations are happening in and around the Bay Area, where for me as a Republican it tends to be a Democratic echo chamber of rhetoric and ideology,” said Adam Castle, the president of East Bay Young Republicans and one of the dinner guests. “To have a space to have conversation and not feel attacked was nice and refreshing…This is what the country needs to be doing more of.”

Make America Dinner Again comes at a time when it seems the political divide has only grown larger. A 2016 study by the Pew Research Center found that 55 percent of Democrats and 49 percent of Republicans said the other party made them feel afraid. The same study found that 44 percent of both Democrats and Republicans reported they “almost never” agree with someone from the other side of the aisle. In the November/December issue of Mother Jones, journalist Dashka Slater writes about this trend of discussion groups whose goal is to encourage politically dissimilar Americans to interact respectfully. A cognitive linguist told Slater that dispensing facts isn’t very effective when speaking with someone from the other side; what is more effective, he said, is “talking from the level of the heart.”

In the year since the 2016 presidential election, Chang said more than 100 people have signed up to participate in Make America Dinner Again. She and co-founder Lee are training more hosts and facilitators, and created an online group for discussions while they work on setting up more dinners. The goal isn’t necessarily to change anyone’s mind, Chang says, but to build understanding. She can imagine dinner guests becoming Facebook friends and diversifying their newsfeeds, and she hopes some may even be moved to participate in local politics. “We are just people with our own stories and reasons for our beliefs,” Chang said. “At our core we just want to be understood.”

Did politics come up at the dinner table this week? Did you try something new to encourage a more civil or productive conversation? Tell us what happened.