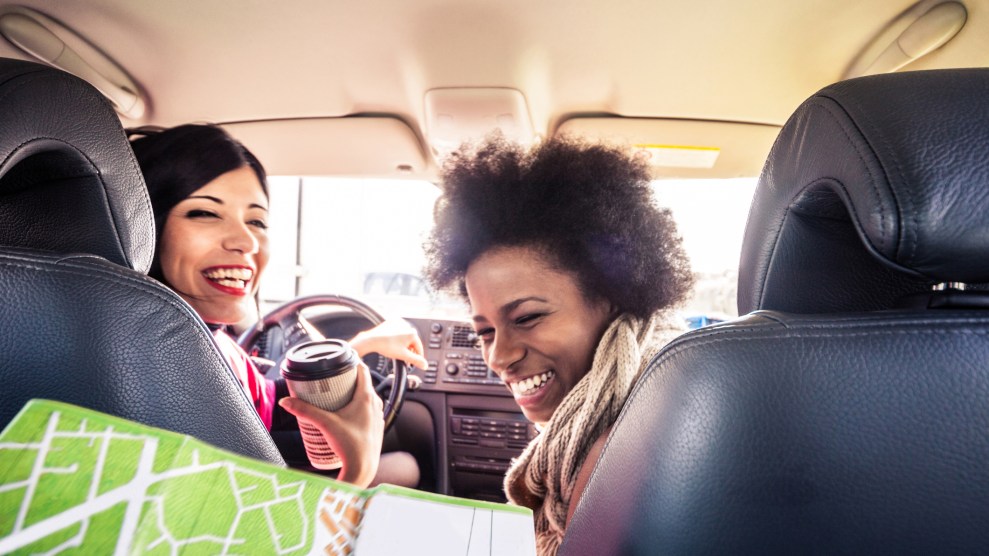 Whether you’re heading to Oregon to see Monday’s eclipse or getting ready for an annual technicolor party in the Nevada desert, you’re going to have a lot of time in the car. While you’re stuck in traffic thinking about your next meal—or roadside pie stop or gas station junk food binge—tune into Bite, the Mother Jones food politics podcast for people who think hard about their food, hosted by Kiera Butler, Tom Philpott, and Maddie Oatman. You can find all of the episodes on iTunes, Stitcher, or wherever you get your podcasts. Here’s our most recent episode:

And here are some of the best episodes for your road trip:

This Simple Advice Completely Changed the Way I Eat

Writer and chef Samin Nosrat distills cooking into four basic elements: salt, fat, acid, heat. In this episode, she reveals secrets about using one of them to transform what you cook—and her advice changed how we tasted food for the days following. Maddie and Samin conduct a taste test, and Samin reveals how she clinched her first cooking job at Chez Panisse, and dishes on what it took to win over Alice Water. Plus, Tom reveals some of his own home cooking tricks.

“Chocolate—ah, glorious chocolate,” says journalist Simran Sethi at the start of our interview. In her book Bread, Wine, Chocolate: The Slow Loss of Foods We Love, Simran regards this beloved treat with a mix of reverence and concern. Chocolate is threatened, but there are ways to ensure its survival, Simran explains. Maddie examines another part of your dinner that’s under threat in the Bay Area, and Tom divulges how beer made advanced civilizations possible.

Many of the most delectable ingredients, from parmesan cheese to tuna sashimi, are deceiving you. Food fraud affects up to 10 percent of the global food supply, and it poses a risk to your health, your taste buds, and your wallet. We chat with Larry Olmsted, author of the book Real Food, Fake Food, about how much of what you eat is a lie, and what you can do about it. Maddie catches up with novelist Margaret Atwood about futuristic pigs, and Tom tells you about the Olympics’ coffee woes.

What American Food is Missing

Dine out in any major American city, and you’ll notice plenty of restaurants paying tribute to immigrant cuisine: taco stands, Ethiopian joints, Jewish delis, Vietnamese cafés. But there’s one striking omission to this melting pot. “There should be restaurants all over the country showcasing Native American foods,” says our guest Sean Sherman, who goes by the name “the Sioux Chef.” A few years ago, Sherman set out to recreate his ancestors’ cuisine, the way it was before Indians were forced onto reservations and frybread became their defining dish. Sherman concocts meals like corn and sumac-seared Walleye and duck and wild rice pemmican, and makes use of foraged plants and native fruits and vegetables. We talked to him about what it was like growing up on the Pine Ridge Indian Reservation, the history of frybread, and his connection to the Dakota Access Pipeline protest. Also: Kiera and Maddie recap some very weird food news stories, involving drones, gummy candies, and Donald Trump.

You know Michael Pollan from his blockbuster book The Omnivore’s Dilemma or his most recent title, Cooked, which was adapted by Netflix as a documentary series. But the celebrity author hasn’t always been so obsessed with what people eat. “Before I started writing about food, my focus was really on the human relationship to plants,” Michael tells us. “Not only do plants nourish us bodily—they nourish us psychologically.” Now he’s researching flora with psychedelic properties for a new book. Part of the project covers recent experimental trials using psilocybin (a compound found in magic mushrooms) to treat cancer patients’ anxiety about death. Plus: How much do you know about ayahuasca? And what Amazonian creature did Michael munch on in Brazil?

“As A Fat Person, I Felt I Always Had to Apologize for Myself”

Has anyone ever teased you about your size? On this episode, we talk all about fat shaming—and we hear from two amazing writers who try not to internalize all the messages about the importance of being skinny. First up, writer Lindy West, author of the book Shrill and many pieces about body image, including one for The Stranger called “Hello, I Am Fat.” Then Maddie interviews Samantha Irby, who writes the blog Bitches Gotta Eat, and has a hilarious new collection of essays called We Are Never Meeting in Real Life.

The Secret Lives of Chefs