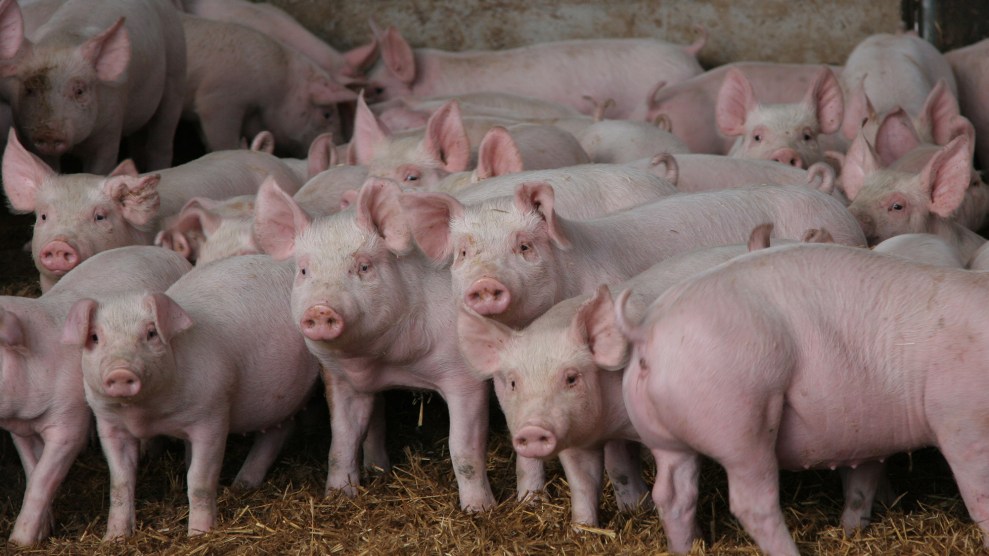 Since the Food and Drug Administration began moving three years ago to control antibiotic use in meat animals—an effort that culminated in January with a ban on growth-promoter antibiotics, which fatten livestock inexpensively—farmers have wondered whether anything can take the drugs’ place.

A report released Monday by the Pew Charitable Trusts finds that an array of alternatives are already on the market, are supported by science, and are being used by some livestock producers. But it also found that development of promising products is moving slowly because manufacturers are not sure how big a market they can expect.

Ironically, part of what holds new products back is the livestock industry’s long-standing resistance to allowing data about antibiotic use to be gathered on farms—information that, if it existed, could guide antibiotic alternatives to where they are needed most.

Antibiotics are used to treat sick animals, to prevent disease by giving the drugs to animals that do not show signs of illness, and to promote growth. Growth-promoter antibiotic dosing was disallowed in the United States as of January 1 under a set of measures known as Guidances. Disease prevention and treatment are now allowed only with a veterinarian supervising.

In 2015, the last year for which there is data, 34.3 million pounds of antibiotics were sold in the United States for animal use. That was the highest amount since the FDA began reporting annual totals in 2008. About 70 percent of those drugs were sold for “production or therapeutic indications”—a term that covers both growth promotion and disease prevention. So it seems likely that some significant proportion of those millions of pounds needs to be replaced.

In its report, which appears to be the first to survey the whole landscape of antibiotic alternatives for livestock, Pew found that some researchers anticipated the change and have been investigating alternative products for a while.

“We were amazed when we started this by how much research is out there,” Dr. Karin Hoelzer, a veterinarian and senior officer at Pew, said by phone. “What was not out there…is a systematic synthesis of what works and doesn’t work, and where more data are needed—especially broken down by species, because of course the needs of a chicken are different from the needs of a cow.”

The range of alternative products covered by the report goes from vaccines and drug-like products such as bacteriophages and antimicrobial peptides, to feed additives such as enzymes, probiotic and prebiotic beneficial bacteria, metals, and essential oils.

Pew found that the strongest evidence gathered so far supports vaccines and immune modulating compounds for disease prevention, and probiotics for both disease prevention and weight gain. A number of probiotic products already are on the market. As feed supplements, they face a lower regulatory bar, which is less expensive to meet, than what drugs face.

The survey also found that the meat sector that has gone the furthest into alternatives is broiler chicken production, with vaccines and immune modulators and an array of feed additives all being researched and sold. (Producers Perdue and Bell & Evans, for instance, feed their chickens herbs and botanical compounds, and highlight their use of those alternatives in their marketing campaigns.)

But there’s an important caveat to the interest in alternative products: They seem to be more narrow-spectrum than antibiotics. Most produce only one result—improving immune responses or encouraging nutrient uptake or killing bad bacteria—rather than several, as antibiotics do. They also require more precise dosing, working only at particular times in an animal’s life rather than throughout its life. And they do not produce the same results in all species.

“Physiology makes a difference,” Hoelzer said. “For instance, cows are very good at digesting things, so a product that might be intended to work in the intestines will be broken down before it reaches them.”

What’s encouraging, Hoelzer said, is that the need for more research into alternatives is being recognized. Last December, for instance, the US Department of Agriculture and the World Organization for Animal Health (known as the OIE for its acronym in French) collaborated on a four-day scientific symposium on alternatives that attracted so much interest that registration closed early.

But for the field to move ahead, more research is needed. “The biggest need is for more research,” Hoelzer said. “If we expect farmers to adopt these products, they are going to have to be assured that they work.”