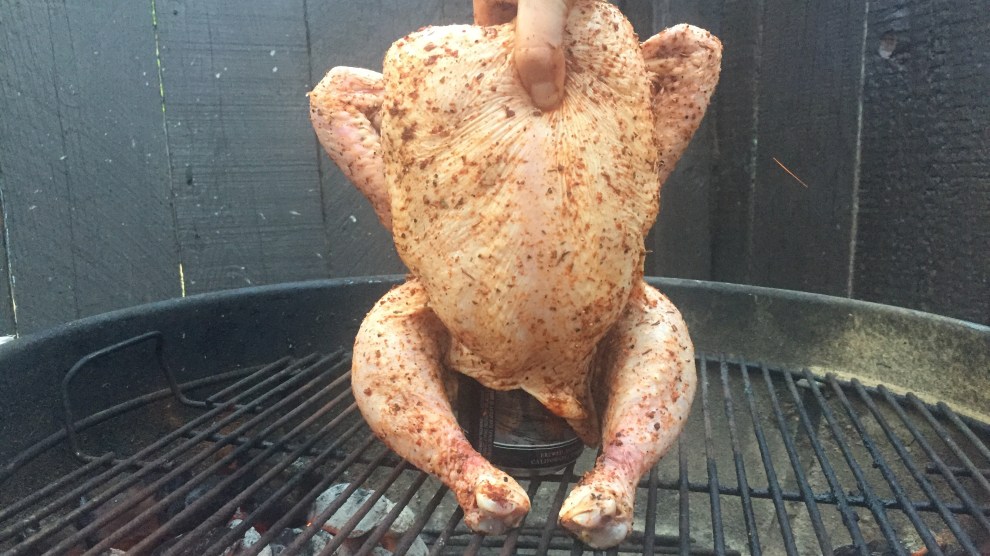 In the past week, some of my colleagues got strangely obsessed with “beer-can chicken.” Since it seemed like no one had actually made the dish, I volunteered to give it a whirl. It’s also called “drunk chicken,” “chicken on a throne,” or “beer butt chicken” and some people swear that this method is the simplest way to get ultra-moist meat. Here’s how it works: You set a dry-rubbed raw chicken carcass on top of a half-full can of beer. (See the recipe at the bottom of this post.) Then you set it on a fired-up grill. The can acts as a stand, keeping the bird upright so it cooks evenly on a covered barbecue. After a bit more than an hour over the coals, you’ve got a juicy, roasted bird.

This is an easy way to cook a whole chicken. But I was a little nervous about the risk, since the process involves heating an aluminum can upward of 150 degrees. Many beer cans are lined with bisphenol A (BPA), a chemical that’s associated with a variety of ailments, including cancer, reproductive trouble, and irregular brain development in kids. My colleague Tom Philpott has written about BPA inside beer-can linings. Would grilling a can lined with BPA encourage the chemical to seep into the meat?

No formal studies have been conducted on beer-can chicken and BPA, but the question has intrigued other chefs. In 2011, Cook’s Illustrated sent two cooked chickens to a lab—one that had been roasted atop a beer can, and one in a pan filled with beer. The result wasn’t so bad. Each chicken had less than 20 micrograms of BPA per kilo, well below the FDA’s “no observed effect” of a daily exposure of 5 miligrams—or 5,000 micrograms—per kilo of body weight. (That’s about 340,000 micrograms in a 150-pound adult.)

Greg Blonder, professor of design and product engineering at Boston University, compared the beer-can method with traditional roasting and found that with the beer-can method, the inside of the bird’s cavity doesn’t get much hotter than 160 to 170 degrees, which isn’t nearly high enough to emit dangerous vapors (or flavors) into the bird. In an email to Mother Jones, Blonder said the greater risk would be drinking the brew afterward (but seeing that it’s piping hot, who would want to?).

Blonder did point out the most dangerous part of beer-can chicken—a rookie mistake I made on my attempt. Don’t yank out the can bare-handed after the bird is cooked. It’s hot as hell and likely to spill liquid and grease. (By the way, one thing I learned in all of this was that you don’t have to use a can of beer. I had friends recommend Dr. Pepper or canned juice.)

The chicken I cooked turned out exceptionally juicy, and the skin had the perfect crunch and crisp. But according to one chef, that probably wasn’t due to the beer. Meathead Goldwyn, founder of AmazingRibs.com, debunked myths about the beer contributing moisture or flavor, arguing that the brew never gets hot enough to truly steam the meat. Meathead calls the bird nothing more than a giant “chicken coozie,” since the inside of the can isn’t getting much hotter than 130 degrees.

If you’re not sure about the beer-can method, you can always opt for a vertical roaster, since the can just serves to keep the bird upright. But if you did that, you wouldn’t have five cold ones to enjoy with your cooked bird.

Here’s how I did it: