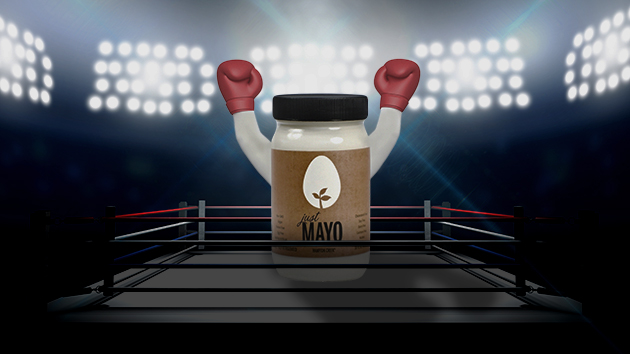 Update, (8/4/16) : Bloomberg alleges in a new report that Hampton Creek goosed its sales by buying purchasing its own product, Just Mayo. In a 2014 email to Hampton Creek staffers obtained by Bloomberg, the company’s former director of corporate partnership wrote:

We need you in Safeway buying Just Mayo and our new flavored mayos…The most important next step with Safeway is huge sales out of the gate. This will ensure we stay on the shelf to put an end to Hellmann’s factory-farmed egg mayo, and spread the word to customers that Just Mayo is their new preferred brand. 🙂

Hampton Creek CEO Josh Tetrick maintains that the point of the program, which cost about $77,000, was “assessing the product from the customer perspective.”

In the great mayo wars of 2015, there is finally a winner.

For those who haven’t been following the scandal-filled sandwich spread controversy, a bit of background: It all began in 2013, when the egg-alternative food startup company Hampton Creek launched a vegan mayonnaise-like product called Just Mayo, which soon became Whole Foods’ most popular mayonnaise. 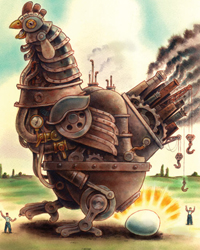 Read our past coverage of the hackers trying to make fake eggs better. Ross MacDonald

So popular was Just Mayo, in fact, that in November 2014, Unilever, parent company of market leader Hellmann’s, sued Hampton Creek for false advertising and unfair competition. The food giant argued that Just Mayo, because it contained no eggs, “damages the entire product category, which has strived for decades for a consistent definition of ‘mayonnaise’ that fits with consumer expectations.” Unilever dropped the lawsuit about a month later “as consumers heaped scorn on the company for what they viewed as a frivolous lawsuit,” the food industry news site Food Dive reported.

Nevertheless, in August of this year the FDA ruled that Hampton Creek couldn’t call its product mayonnaise. “The use of the term ‘mayo’ in the product names and the image of an egg may be misleading to consumers because it may lead them to believe that the products are the standardized food, mayonnaise,” the FDA said in a statement.

Then, in September, internal emails from the American Egg Board surfaced. They showed that the industry group had tried to stop Whole Foods from selling Just Mayo—and that Egg Board members were really worked up over Hampton Creek. From the Guardian:

More than one member of the AEB made joking threats of violence against Hampton Creek’s founder, Josh Tetrick. “Can we pool our money and put a hit on him?” asked Mike Sencer, executive vice-president of AEB member organization Hidden Villa Ranch. Mitch Kanter, executive vice-president of the AEB, jokingly offered “to contact some of my old buddies in Brooklyn to pay Mr. Tetrick a visit.”

Egg Board CEO Joanne Ivy retired early in the wake of the episode.

While all that was going on, Hampton Creek was working with the FDA on a compromise, and today, the company announced that it will be allowed to keep the name Just Mayo, as long as it makes its eggless-ness even clearer on the product label. The AP’s Candice Choi reports:

The changes include making the words ‘egg-free’ larger and adding ‘Spread & Dressing.’ An image of an egg with a pea shoot inside will also be smaller.

Now, all this hoopla over a “spread and dressing” and its picture of a pea-shoot-bearing egg might seem ridiculous, but keep in mind that this business played out against the backdrop of a devastating avian flu outbreak that hobbled the egg industry. What’s more, in April two former egg industry executives were sentenced to jail time for their connection with a 2010 salmonella outbreak that is thought to have sickened as many as 56,000 people.

All those egg woes aside, there’s another reason behind egg purveyors’ massive freak-out: At least according to writer Rowan Jacobsen, unlike most other eggless mayonnaise products, Just Mayo actually tastes good.