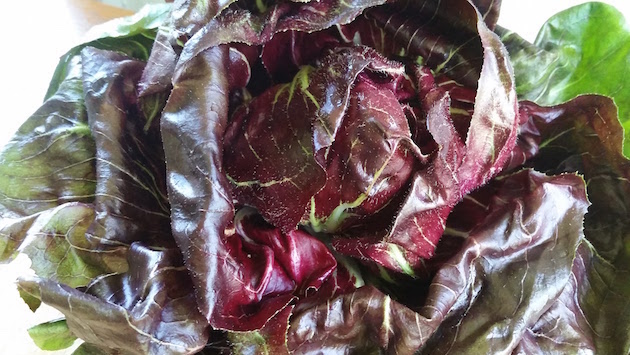 Turkey. Gravy. Stuffing. Mashed potatoes. Green-bean casserole. The great Thanksgiving war horses all deliver gentle flavor and soft texture (save, all too often, for the turkey). To avoid unwittingly serving a vast baby-food smorgasbord, what you need is a dish with a little crunch and a blast of bitterness—yes, bitterness, the most neglected and misunderstood of the five basic tastes. What you need, in short, is a member of the chicory family, those underutilized, cool-weather vegetables like radicchio, frisée, endive, and escarole.

To avoid unwittingly serving a vast baby-food smorgasbord, what you need is a dish with a little crunch and a blast of bitterness.

In her excellent 2014 cookbook, Bitter: A Taste of the World’s Most Dangerous Flavor, with Recipes, Jennifer McLagan writes that “cooking is about balancing tastes, and bitter often plays a vital role in a dish’s harmony; it is crucial to the composition of a meal or a menu.” Without bitterness, she adds, “we lose a way to balance sweetness. Food without bitterness lacks depth and complexity.” Also, bitter is “both an appetite stimulant and a digestive—that is, it has the power to make you hungry as well as helping you digest your meal.” In other words, bitterness is a necessary component to a successful feast. 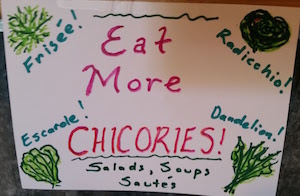 Since the weather cooled a couple of months ago, Austin’s Boggy Creek Farm has been churning out gorgeous, richly red-veined heads of leafy radicchio. I sometimes chop it up raw, toss it in a lemony dressing with plenty of chopped parsley, and serve it garnished with toasted walnuts and grated Parmesan. Such a salad would make a fine addition to the holiday table, but it might be too bold for the bitter-averse.

To draw them in, you might try the other way I’ve been treating the season’s radicchio bounty: braised, mixed with another earthy fall staple, kale, emboldened with garlic and a little chile pepper, and mellowed with sautéed onions. If you really want to draw in the uninitiated, take the finished product (minus the lashing of vinegar at the end), and turn it into a rich gratin, a technique I highlighted last Thanksgiving.

While you’re cooking, listen to this excellent episode of the BBC Food Programme focused on bitterness—why we recoil from it, why we always come back to it, and why we need more of it. Also check out this great recent New Scientist article on the nefarious plot to reduce bitterness—and vital nutrients—from our food. 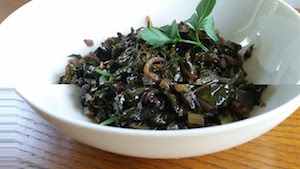 Braised Radicchio and Kale
(Makes a side dish for 3-4—multiply accordingly.)

1 onion, halved lengthwise and sliced thin
3 cloves of garlic, crushed and minced
Enough extra-virgin olive oil to generously cover the bottom of a large pan
A pinch of chile flakes
1 bunch of kale, preferably Russian red or lacinato
1 head radicchio
Sea salt
Some grated hard cheese, such as Parmigiano-Reggiano, to garnish (optional)
Plenty of freshly ground black pepper
A little vinegar, such as balsamic or apple cider (fresh lemon juice would be a great substitute)

Heat the oil in a large heavy-bottomed pot over low-medium heat, add the onions and a pinch of salt, and let them sauté, stirring occasionally, until they are very soft. Don’t rush this step, and make sure there is sufficient oil—you’ll want the onions to cook until they’re fully translucent (but not caramelized), to tease out their sweetness.

While the onion is cooking, prep the kale and radicchio. Remove the stems that run down the center of the kale leaves (holding a leaf in one hand, slice down each side of the stem with a knife). By the time you’re done, you’ll have two piles: one of stems and one of leaves. I apply a nose-to-tale ethos to vegetables, and consider greens’ stems to be highly flavorful. So bunch the stems in a pile and slice them finely, crosswise. Set aside. Now chop the greens coarsely and set them aside, too. (The point of separating out the stems is to give the stems a head start cooking, as they take a little longer.) Coarsely chop the radicchio, and add it to the chopped kale leaves.

Now the onions should be soft. Add the chopped garlic and a pinch of chile flakes to the pot and stir for a minute or so, until it has released its fragrance. Add the chopped stems and another pinch of salt, stir to mix in with the onions and garlic, and cover the pot. Let them cook for about five minutes, stirring occasionally. Now add the chopped kale and radicchio leaves, and add a good dash of water (or stock). Stir, combining the leaves with the other stuff, and turn the heat up until the liquid begins to boil. Stir again, cover, and turn the heat to low.

Allow the mixture to braise slowly until the leaves have begun to turn tender but retain a little crunch. Take the lid off and turn the heat to medium and cook, stirring occasionally, until any remaining liquid has evaporated. Add a dash of vinegar (or lemon juice), a big grind of pepper, and taste, adding salt, vinegar, or pepper to taste. Serve, garnished with a bit of grated Parmesan or other hard cheese. This dish makes a fine side to roast meats (including turkey), and you can also toss it with pasta, along with more olive oil and cheese, some toasted walnuts, and chopped parsley. Happy feasting.