Protein is the macronutrient of the moment, embraced by Paleos, low-carb enthusiasts, and other dieters. Sugary breakfast cereals, meanwhile, are out—sales are in the midst of a long, slow decline. Might adding the word “protein” to a hoary old cereal brand spark a sales renaissance? That’s the experiment General Mills launched last year when it debuted Cheerios Protein. “I think the protein trend is real. I think it started with [the Atkins diet] back in the day, leveled off and now is gaining steam again,” a General Mills exec told The Wall Street Journal at the time.

There’s no word on how the product is doing at the supermarket checkout. “We do not release individual product sales data,” a company spokesman told me. But the Center for Science in the Public Interest has taken a hard look at the product’s label. In a class-action lawsuit filed in a California federal court, CSPI alleges that “General Mills falsely and misleadingly markets Cheerios Protein to children and adults as a high protein, healthful alternative to Cheerios.”

In fact, CSPI claims, Cheerios Protein offers just marginally more protein per equivalent serving than the old product—plus, it claims, a startling 17 times more sugar. Insult to injury, General Mills charges a premium for the product: “about 70 cents more per box at stores like Walmart, Giant Foods, and Safeway,” CSPI claims in a press release. The lawsuit demands damages for the plaintiffs (aggrieved Cheerios Protein buyers) and an “injunction to stop General Mills’s false and misleading marketing practices with regard to Cheerios Protein.”

“We don’t normally respond to these publicity-seeking lawsuits from CSPI—but we do reject their comparison,” a General Mills spokesman wrote in an email. He added:

So, who’s right? Turns out, General Mills is playing games with serving sizes on its labels. 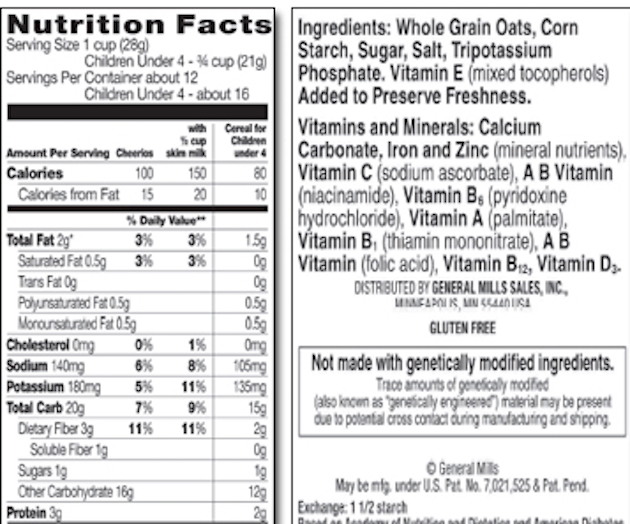 Note that a 28 gram serving delivers 3 grams of protein and 1 gram of sugar. 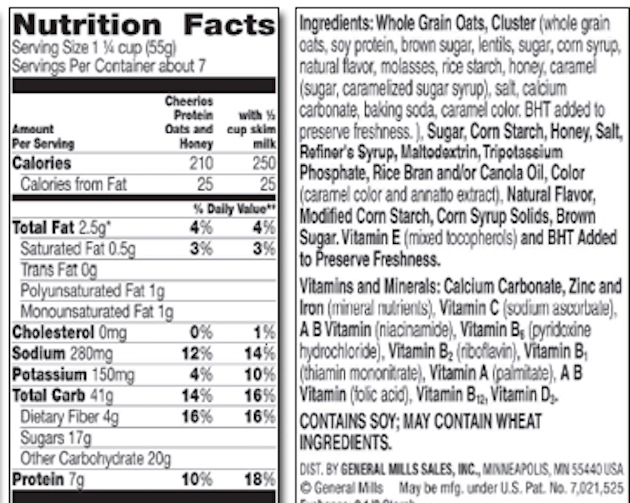 Now, we’re talking about a much bigger serving size: 55 grams. This new-and-improved Cheerios iteration delivers 7 grams of protein and 17 grams of sugar at this enlarged serving size.

To compare the two, I adjusted the original Cheerios numbers to reflect a 55 gram serving. Just for fun, I added another sought-after ingredient to the mix: dietary fiber. The results are in the chart at the top.

To goose the protein content, General Mills opted to add bite-sized “clusters” made up (see label above) of oats, soy protein, and lentils.

So it’s true that the protein-enhanced version delivers marginally more protein—7 grams vs. 5.9 grams per 55 gram serving. That’s an 18.6 percent difference. That may sound like a lot, but we’re talking about just 1.1 grams. According to Institute of Medicine, adult men need 56 grams of protein per day, and adult women require 46 grams. The extra bit provided by Cheerios Protein doesn’t move the needle much.

On the sugar front, the Cheerios Protein delivers about eight times more, my label comparison suggests. That’s less than the 17-fold sugar jump alluded to in the CSPI lawsuit, but still a hell of a lot more sugar. For perspective, 17 grams of sugar is equal to about 4 teaspoons—about a third of the Food and Drug Administration’s recommended maximum intake. Anyone who drinks a single can of soda (about 10 teaspoons of sugar) after a bowl of Cheerios Protein has instantly leapt above the FDA’s threshold.

So how did this happen? How did a major food conglomerate set out to infuse a fading legacy product with one trendy nutrient, and instead lace it with a decidedly non-trendy one like sugar? I imagine it was all about trying to keep the new product palatable despite adding stuff not normally associated with cereal.

To goose the protein content, General Mills opted to add bite-sized “clusters” made up (see label above) of oats, soy protein, and lentils. I’m going to venture a guess that soy protein doesn’t taste very good on its own; and its hard to imagine what lentils taste like without salt and savory spices. Perhaps all the added sugar—CSPI notes that Cheerios Protein brings it in no fewer than eight forms, which you can confirm in the label above—is there to overwhelm those legume flavors in this grain-based cereal.

Reporting on a taste test he organized not long after Cheerios Protein’s 2014 launch, Huffington Post’s Joe Satran wrote that:

Mercifully, our taste testers did not report the cereal tasting like dal. Instead, they found Cheerios Protein to be, broadly, a lot like regular Cheerios. Many noted that the texture was a little more “robust” and firm than traditional Cheerios, but no one reported off flavors. It seemed like they were sweetened and flavored a little more aggressively than normal Cheerios, perhaps to mask the taste of the clusters.

Whatever the thinking behind Cheerios Protein, consumers should know they’re getting just a “smidgen more protein”—to quote the CSPI lawsuit—and dramatically more sugar, when they pay up for the new product.