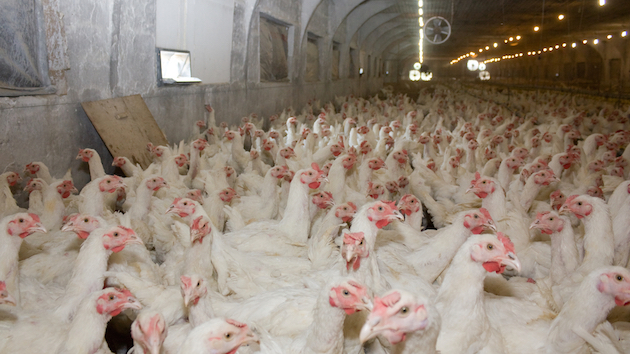 After decades of ignoring a deadly problem, the Food and Drug Administration finally came out with rules restricting the meat industry’s heavy reliance on antibiotics back in 2012. But the new regime had two major flaws: (1) It was voluntary, relying on the benevolence of two industries (pharmaceuticals and meat) with long records of lobbying hard for their own interests, and (2) it contained a loophole that allowed meat producers to maintain their old antibiotic habit if they so desired.

Enter California, with new legislation—expected to be signed into law by Gov. Jerry Brown any day now—that would retract those regulatory gifts from the state’s teeming livestock farms.

California’s bill would forbid daily, indiscriminate dosing of antibiotics based on some vague notion of “prevention.”

The bill would make California’s regulation of animal antibiotic use more stringent than the federal government’s simply because it’s compulsory and not voluntary, according to Natural Resources Defense Council senior attorney Avinash Kar. But it also snaps shut the infamous “prevention” loophole in the FDA’s policy, he adds.

Antibiotics are used in three ways on factory livestock farms: (1) growth promotion—when animals get small daily doses of the the stuff, they grow faster; (2) disease prevention—animals stuffed together in stressful conditions are prone to infection, they pass diseases among themselves rapidly, and antibiotics provide a kind of pharmaceutical substitute for a natural robust immune system; and (3) disease treatment—an animal comes down with a bug and gets treated with antibiotics.

The FDA’s policy phases out growth promotion but leaves prevention intact—even though giving animals small daily doses of antibiotics to “prevent” disease is virtually indistinguishable from giving them small daily doses to promote growth. A 2014 Pew analysis found no fewer than 66 antibiotic products that the FDA allows to be used for “disease prevention” at levels that are “fully within the range of growth promotion dosages and with no limit on the duration of treatment.” In other words, you change the language you use to describe the practice and continue giving your herd of 4,000 confined pigs the same old daily dose of antibiotics.

The California bill, too, allows antibiotic use as “prophylaxis to address an elevated risk of contraction of a particular disease or infection,” but it adds an important qualification, Kar points out: The drugs can’t be used “in a regular pattern.” In other words, no more daily, indiscriminate dosing based on some vague notion of “prevention.” “We think this [the “regular pattern” language] puts serious restraint on the routine use of antibiotics,” Kar said.

The California law won’t have an immediate  impact on national policy, Kar said, but he pointed out that the bill’s passage might embolden several other states with significant livestock production, including Oregon and Maryland, that are considering similar legislation. And California itself is a massive producer of dairy, beef, and chicken.