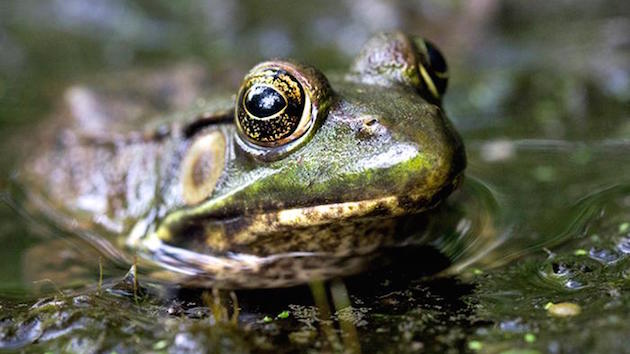 To paraphrase Kermit, it’s not easy being a frog. These insect-chomping, sonorous creatures are under severe pressure, their populations plunging both nationally and globally. Evidence has mounted for years that agrichemicals commonly used on big corn and soybean farms are wreaking havoc on frogs, feminizing males and shifting sex ratios.

When biologist Tyrone Hayes discovered that a top-selling herbicide messes with sex hormones, the herbicide’s manufacturer went into battle mode. Thus began one of the weirdest feuds in the history of science. Read Dashka Slater’s “The Frog of War” here.

But what about the lawn, that great symbol of US suburbia? A 2005 NASA study estimated that lawns cover about 128,000 square kilometers, or 31 million acres, of our landmass. That’s equal to about a third of the territory we devote to corn, our biggest crop. What’s all that turf grass and ornamental shrubbery mean for frog life?

Nothing good, suggests a new study published in the Proceedings of the National Academy of Sciences of the United States of America, by Yale and US Geological Survey researchers. They compared frog populations in forest and suburban zones in Connecticut—and found that frogs in the suburban areas had twice the ratio of females to males compared with frogs in the forested areas. Then they tested water from suburban and forest ponds for a particular class of chemicals—hormone-mimicking compounds that can disrupt the endocrine systems of frogs at very low levels. They found them in only one of six of the forested ponds, but in nearly every (11 of 13) of the suburban ones.

So what’s the culprit? You might think it’s all the chemicals people tend to dump on their lawns. But the study’s lead author, Yale researcher Max Lambert, told me that while he and his colleagues tested the suburban water for “a couple of” pesticides, they didn’t find any. He said that while lawn chemicals couldn’t be ruled out as a cause of the sex changes, the main driver may be endocrine-disrupting chemicals that occur naturally in some plants, known as phyto-estrogens. These compounds turn out to be rare in most forest plants but abundant in common lawn plants like clover (often added to lawn grass mixes) and various ornamental shrubs, he said. Whatever the cause, “our work shows that for frogs, the suburbs are similar to farm areas,” he said—meaning that both of these human-dominated landscape types offer plenty of room for frogs to roam but may be subtly poisoning them.