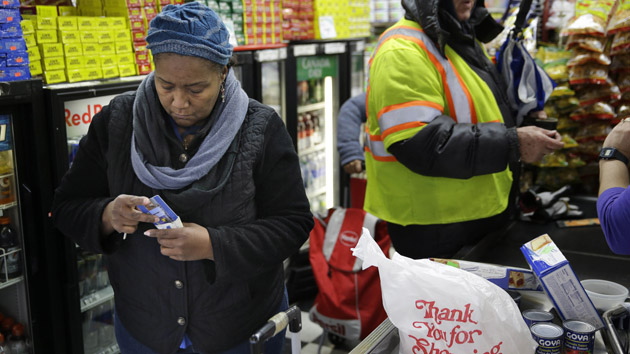 Pastora Spraus organizes her pocketbook after paying for groceries with an EBT card in West New York, New Jersey.Seth Wenig/AP

On October 1, if Congress fails to pass a budget to keep the government running, some 46 million low-income Americans will lose out on billions of dollars in federal food assistance benefits.

The ongoing fight over a budget provision to block Planned Parenthood funding for one year has cast doubt on future short-term funding for the Supplemental Nutrition Assistance Program (SNAP), once known as food stamps. (On Thursday, the Senate halted Republican efforts to defund Planned Parenthood, and it appears a vote on a clean budget bill is approaching.) Sen. Pat Roberts (R-Kan.), who chairs the Senate Agriculture Committee, told the Huffington Post this week that Democrats concerned about food stamp funding should support the GOP’s resolution to keep the government running and gut Planned Parenthood.

The US Department of Agriculture, which oversees the program, warned state agencies in a letter on September 18 to hold off distributing funds to Electronic Benefit Transfer cards for October “until further notice,” potentially delaying grocery money for millions of Americans.

Two years ago, when the government shut down for 16 days, the USDA kept benefits flowing to families thanks to contingency reserves from the 2009 stimulus bill. But those funds have since been depleted. Rep. Rosa DeLauro (D-Conn.) told Politico that, after a conversation with Agriculture Secretary Tom Vilsack, it was clear that “there is not enough money in the SNAP contingency fund to prevent millions of Americans from going hungry should the government shutdown on Oct. 1.”

But just how would the loss of food stamp benefits affect SNAP beneficiaries? Well, last year, the federal government invested $76 billion on the food stamp program. More than 90 percent of it went toward providing benefits to families below the poverty line. To put that in perspective, of the 22.7 million households participating in the program in the fiscal year 2014-2015, the average household received almost $256 dollars each month in benefits, or $126 per person.

What’s more, the SNAP program acted as a financial catalyst for low-income Americans and boosted the economy. The latest Census Bureau report found that the SNAP program kept 4.7 million people out of poverty in 2014. And for every five dollars spent using food stamps, about $9 went toward boosting the economy, according to the Center on Budget and Policy Priorities, a left-leaning think tank. Research has shown that low-income families spending SNAP benefits on groceries under a credit incentive program purchased more produce.

California, Florida, New York, Illinois, and Texas, which together dish out 38 percent of the country’s total SNAP benefits, would likely be most affected by the stoppage. Here’s a breakdown of benefits for each state.