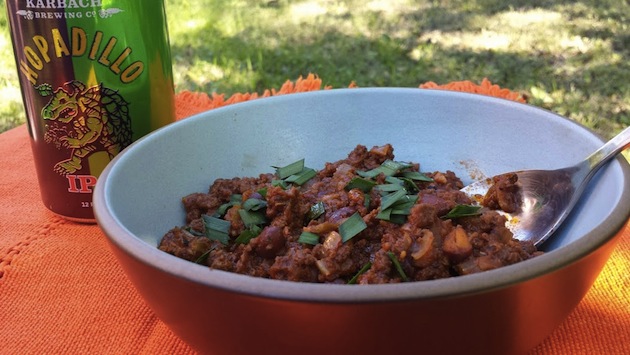 Bowl of red? You could call it that—at your own risk. Tom Philpott

During a recent frigid snap, I found myself with a cold chill I couldn’t get rid of, a pound of (grass-fed, local) ground chuck thawing in the fridge, and a fierce appetite. The thought of burgers didn’t hit the spot, nor did pasta with meat sauce. My mind reached to the depths of my Texas childhood and found a primordial craving I hadn’t thought of in years: chili.

Now, chili is as bitterly contested and regionally variegated a dish as cassoulet in France or paella in Spain. Like those dishes, its origin is in dispute. Some partisans insist it must not contain beans (the Texas “bowl of red” school); others demand that it do. Tomatoes are another flashpoint. Serious chili requires chunks of beef, not the ground stuff. Etc.

I usually have patience for such debates. This time, I cast them aside and got busy. I decided to add beans, critics be damned, to stretch the dish out, because I wanted plenty of leftovers. I considered starting with a mirepoix—the French trinity of onions, carrots, and celery—but decided that carrots in chili would be too hippie. (I stuck with celery though, on the theory that it would be barely noticeable).

I knew that to distinguish it from a generic meat sauce, I’d need lots of cumin and paprika, and was relieved to find both in my cupboard. But in another affront to chili tradition, I decided to ignore regular paprika and tap my little jar of that wonderful smoked Spanish version known as Pimenton de la Vera, which added a nice dimension to the mix.

And to complement my main dish, I was happily surprised to find that I had all the ingredients for a simple cornbread—to me, the ultimate accompaniment to chili. (Cornbread is another highly divisive topic, and one for another column.) What follows is a recipe that I predict will unite in fury two disparate groups: vegans and chili partisans. It’s also a really good quick dinner. Enjoy!

Enough high-quality fat, such as olive oil, lard, or bacon grease (I used the latter) to generously cover the bottom of a large pan
1 medium onion, chopped
2 stalks of celery, chopped
3 cloves of garlic, smashed, peeled, and minced
1 pound ground beef, preferably grass-fed
(At least) 1 teaspoon of cumin, freshly ground if possible
1 teaspoon oregano (thyme works to, as does the combination of thyme and oregano)
1-2 bay leaves
1 teaspoon of paprika, smoked or otherwise
1 teaspoon of sea salt
½ 28-ounce can whole plum tomatoes (reserve other half for another use, like salsa)
1 regular 15-oz can of red beans, such as kidney beans, or a cup of dry beans, cooked
Plenty of fresh-ground black pepper
A dash of apple cider vinegar, optional
Something green, like chopped green onion tops or chives, to garnish

Place the pan over medium heat and add the fat. When it’s hot, add the onions and celery and cook, stirring occasionally, until they’re soft. Add the garlic, cumin, oregano, bay leaves, paprika, and salt, and let it cook, stirring to prevent the garlic from burning, for another minute or two.

Turn the heat to low, and let the tomatoes simmer, gently, for 20 minutes or so. After it’s thickened a bit, add the beans along with about half of their liquid, bring to a boil, and let it simmer, again for 20 minutes or so. Give it a veritable cascade of fresh-ground pepper. Taste for seasoning. (I like my chili highly flavorful, but not spicy-hot—just spicy enough to tickle the back of my throat. Then I serve fiery condiments at the table.) After adding a little salt, I found that a dash of apple cider vinegar balanced the flavor.

Classic chili garnishes include chopped green onions (white and green parts) as well as grated cheese. I decided against cheese, on the grounds that the chili seemed rich enough, and I had no green onions on hand. Garlic chives from the garden did the trick.

Serve with cornbread, a green salad, and your favorite hot sauce. I used my beloved home-made salsa macha.