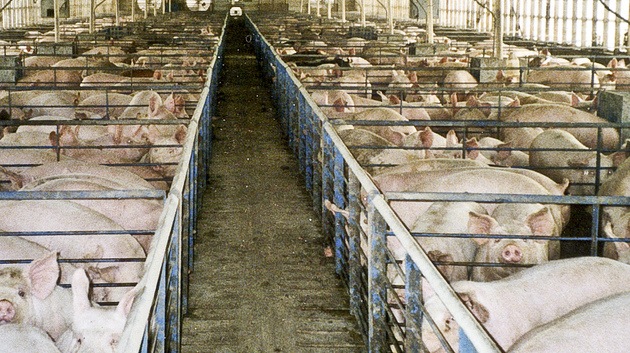 Factory-scale farms don’t just house hundreds of genetically similar animals in tight quarters over vast cesspools collecting their waste. They also house a variety of bacteria that live within those unfortunate beasts’ guts. And when you dose the animals daily with small amounts of antibiotics—a common practice—the bacteria strains in these vast germ reservoirs quite naturally develop the ability to withstand anti-bacterial treatments.

Antibiotic-resistant bacteria leave these facilities in two main ways. The obvious one is meat: As Food and Drug Administration data shows, the pork chops, chicken parts, and ground beef you find on supermarket shelves routinely carry resistant bacteria strains. But there’s another, more subtle way: through the people who work on these operations.

In a new paper, a team of researchers from Johns Hopkins and the University of North Carolina-Chapel Hill took nasal swabs from 22 North Carolina hog facility workers over 14 days. The results: 10 of them proved to be “persistent” carriers of a strain of bacteria associated with livestock called Staphylococcus aureus—that is, they carried for up to four days after their last day at work. Of those 10, 7 of the workers carried a form of Staphylococcus aureus that’s resistant to one or more antibiotics.

The researchers report that their study is the first to test the persistence of the bacteria strains that workers pick up at livestock farms. “Researchers had believed that livestock-associated bacteria would clear from the noses of hog workers quickly—within 24 hours,” the press release accompanying the report states. Apparently, not so much.

If the sample size sounds small, it is. Most hog production in North Carolina takes place within facilities owned or operated by large meat-processing companies, and they aren’t eager to cooperate with independent researchers. Finding workers to participate is tricky. “This study would not have been possible without a strong partnership between researchers and community-based organisations that have the trust of members of communities in areas where the density of industrial hog production is high,” the authors state.

The study comes on the heels of another one, published on PLOS One in 2013, which compared nasal swabs from workers on industrial-scale hog farms with those of workers on antibiotic-free operations. Six of 34 industrial-farm workers carried multidrug-resistant forms of livestock-associated staph, compared to none of the antibiotic-free farmworkers.

While these and other studies suggest that farmworkers are moving resistant bacteria from farms and into the world, potentially infecting others, they don’t prove that MRSA and other potentially deadly staph strains are spreading from this source. You can carry a staph germ in your nose without becoming infected with it. The authors say they’re now studying whether the workers, their families, and their surrounding communities are more prone to infections.