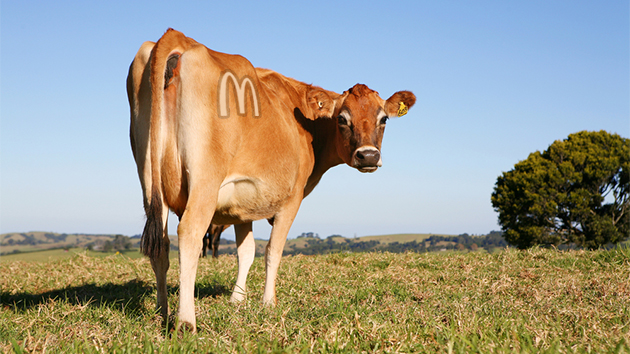 In January, McDonald’s announced that it will begin the transition to sustainable beef in 2016. The plan was met with skepticism, since it didn’t actually define “sustainable.” In the weeks that followed, McDonald’s continued working with a group called the Global Roundtable for Sustainable Beef (GRSB) to come up with a working definition of the term, and on Monday, GRSB released a draft of its definition for public comment. In addition to McDonald’s, GRSB’s new set of sustainability guidelines will also be implemented by the group’s other members, which include Walmart, Darden Restaurants (the parent company of Olive Garden and Red Lobster), Cargill, Tyson Foods, and the pharmaceutical company Merck.

Despite its name, the Global Roundtable for Sustainable Beef is not so much an environmental organization as a meat industry group. Its executive committee includes representatives from McDonald’s, Elanco, and the National Cattlemen’s Beef Association. Just two environmental groups—the World Wildlife Fund and Netherlands-based Solidaridad—are part of its executive board. Cameron Bruett, president of GRSB and chief sustainability officer for JBS USA, a beef-processing company, said that McDonald’s, along with other members, helped come up with the organization’s “sustainability” definition and guidelines.

“I don’t know if there’s any justification for banning antibiotics in feed,” said a GRSB spokesman.

Perhaps unsurprisingly, given the group’s leadership, the GRSB’s guidelines are short on specifics. Instead, the group provides a definition for sustainability that is open to members’ interpretation. The plan says, for example, that sustainable companies must provide “stable, safe employment for at least the minimum wage where applicable” and institute “where applicable, third-party validation of practices by all members of the value chain.” But it doesn’t doesn’t specify which third-party groups should conduct audits, and doesn’t explain how workplaces should be monitored to prevent labor violations. In its section on climate change, it says that GRSB members should ensure that “emissions from beef systems, including those from land use conversion, are minimized and carbon sequestration is optimized.” But it does not include any specific examples of target emissions standards or grazing policies.

Also absent from the plan is any mention of the beef industry’s use of antibiotics. In the United States, four-fifths of all antibiotics go to livestock operations. McDonald’s uses antibiotics to “treat, prevent, and control disease” in its food-producing animals, according to a McDonald’s spokesman.

Using antibiotics to prevent disease—rather than only to  treat infections—has been criticized by some food-safety experts. But the new plan doesn’t recommend that members ditch the practice. “I don’t know if there’s any justification for banning antibiotics in feed, I know that’s popular in some media circles, I haven’t seen the scientific evidence,” said Bruett. Yet studies have shown that antibiotic-resistant bugs can jump from animals to humans. In February, several experts told Mother Jones that McDonald’s couldn’t call its beef plan sustainable unless it addressed the overuse of antibiotics in livestock. When asked about whether McDonald’s will continue to be given antibiotics under the new sustainability plan, a McDonald’s spokesman referred Mother Jones to this statement from February, saying “We take seriously our ethical responsibility to treat sick animals”? and indicated that the company will continue to review its policy.

GRSB says that the lack of details in the plan is intentional; it “deliberately avoids” metrics that could be used to measure progress in sustainability, instead leaving it up to local roundtables to tailor the recommendations to specific regions. Bruett noted that “You could come out with a global standard, but it would simply be ignored, and it wouldn’t lead to improvements among members.” He adds, “There’s all the discussion about sustainability, but it’s by people who have very little knowledge or participation in the livestock industry…you’ll never achieve [improvement] unless you have producer participation or support.?”

But Dr. David Wallinga, the founder of Healthy Food Action, a group of health professionals dedicated to promoting good nutrition, points out that while it’s true that one-size-fits all metrics don’t always work, without specifics, policies are “largely unenforceable.” He adds, “I suppose it’s good that McDonald’s is taking on the task of setting guidelines for sustainable beef, [but] a few foundational blocks are missing.”