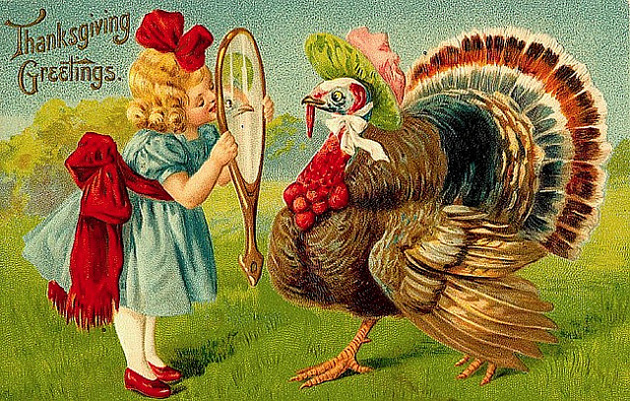 The interwebs are aflame with news that Butterball, the nation’s largest turkey processor, has been beset with a shortage of “large, fresh” (i.e., 16 pounds and over) specimens for the nation’s Thanksgiving tables. The company has plenty of frozen monster-size birds, it emphasizes, but will only fill about half of its orders to retailers for the never-frozen kind. Other industrial-turkey giants like Cargill have reported no problems fattening their birds.

What gives at Butterball, the supplier of 1 in 5 US turkeys? In a statement sent to me and other journalists, Butterball is vague about the reasons for the shortage, citing only a “decline in weight gains on some of our farms.” In other words, the turkeys that Butterball’s contract farmers raise aren’t growing as quickly as expected.

Let’s talk turkey! Tom Philpott will be holding a live Twitter chat the Thursday before Thanksgiving—look him up at @TomPhilpott starting at 3:00 p.m. Eastern, November 21. Ask him anything—from cooking tips (two words: dry brine) to the latest dirt on industrial turkey.

This is odd. If there’s one thing the modern poultry industry has mastered, it’s fattening millions of fowl extremely quickly. And turkeys have been getting bigger and bigger for decades. “[T]urkeys have increased in average weight annually for at least the past 40 years,” the US Department of Agriculture revealed in a 2005 report. The USDA added that the average weight of a turkey at slaughter jumped from 18 pounds in 1965 to an enormous 28.2 pounds in 2005—a 57 percent increase. By 2012, the average had inched up to a hefty 29.8 pounds. This is not an industry that’s typically plagued by size issues.

Butterball says it’s “continuing to evaluate all potential causes,” but it has so far declined to name any. Given the near-complete dearth of information, I’ve come up with a few highly speculative possibilities that may—or may not—explain the case of the missing monster turkeys. I ran them past a Butterball spokesperson, but received no comment. Like a nice slice of roast turkey—preferably from a bird raised outside on pasture—these ideas should be taken with a few grains of salt. But until Butterball divulges more information, speculation is all we have.

Is it the (lack of) ractopamine, stupid? Ractopamine, a drug that mimics stress hormones in animals but makes them pack on lean weight rapidly, is a popular feed additive on factory-scale US farms. It’s most famously used in hog production, but the Food and Drug Administration allows a ractopamine product called Topmax for turkeys (and it’s also approved for beef cattle). Meanwhile, the European Union, China, Taiwan, and Russia all ban the use of it because traces of it end up in meat, and China and Russian have both banned imports of pork from pigs that were raised on it.

What does this have to do with Butterball and its big-bird shortfall? Well, according to the trade journal WattAgnet, Butterball exports 15 percent of its annual output—that’s 100 million pounds of turkey products—and “develops new products that cater to international markets and customs.” As well it might, because as the USDA reports, US per capita annual turkey consumption has been declining, going from 17.5 pounds per person in 2008 to 16.4 pounds last year. Meanwhile, total US turkey exports have surged from 546.52 million pounds in 2007 to 741 million pounds in 2012.

So did Butterball, which supplies feed rations to its contract farmers, quietly cut out the ractopamine to preserve its export markets—and in the process, create a shortage of large birds? The company offered no comment on that possible explanation. Indeed, to my knowledge, it has never acknowledged using ractopamine. My colleague Kiera Butler asked the company about ractopamine a year ago, and got no response. But the controversial drug apparently is commonly used by the US turkey industry—in February, Russia explicitly banned US turkey products over the ractopamine issue. Two weeks ago, Russia rescinded its ban on US turkey effective the end of November, declaring it had conducted inspections of US turkey-processing plants.

Is it the pricey corn? The main feed for industrial turkey is corn—and corn prices have been high for the last half decade, and spiked last year because of the Midwestern drought. In testimony before the House of Representatives this year, National Turkey Federation president Joel Brandenberger complained bitterly about the high price of corn, declaring it “the primary reason one turkey company went bankrupt in 2012 and why the industry already has lost 750 jobs in the last 12 months.”

Is the great big-turkey shortfall of Thanksgiving ’13 a “marketing ploy to build turkey hype”?

Did high corn prices inspire Butterball to substitute some corn in its feed mix for cheaper, lower-calorie alternatives—and sacrifice some bird growth in the process? That’s the first thing that crossed the mind of Cornell professor emeritus of nutrition Malden Nesheim, who started out his Cornell career as a poultry nutritionist. He told me that the only other explanation that would make sense to him would be a disease among Butterball’s flock—but that is “highly unlikely,” since the company sources from several growers. Distillers grains, a byproduct of the process of turning corn into ethanol, is a popular corn substitute on factory farms. According to a report by Sally Noll of the University of Minnesota, distillers grains contain just 84 percent of the energy (calories) of corn. Nesheim told me that it’s “plausible” that Butterball’s size problem stems from a ramping up of distillers grains, but emphasized that without more information from Butterball, he could only speculate.

Are the FDA’s new, voluntary antibiotics rules having an effect? When the Food and Drug Administration released voluntary guidance requesting that the meat industry stop using daily small doses of antibiotics as a growth enhancer last year, I and many other observers mocked the move: first because it was voluntary, and second because the guidelines left a massive loophole in place that could negate any actual cutback (explained here). But what if Butterball is taking the FDA’s guidance to heart—and it’s causing slower growth among its birds? You’d think the company would crow like a tom turkey if it had made such a change. Again, the company had no comment.

Is it all just a hoax? Time‘s Laura Stampler suggested the simplest, most elegant explanation: The great big-turkey shortfall of Thanksgiving ’13 is a “marketing ploy to build turkey hype.” Think about it. Say you made your living selling a product that Americans were consuming less and less of.  And meanwhile, competitors selling niche alternatives—in this case, organic, pasture-raised, or heritage-breed turkeys, or fake turkey analogues—are nibbling away at your market share. Wouldn’t you be tempted to create the illusion of a shortage, something to inspire consumers to seek out your product? Scarcity makes the heart grow fonder. Conceivably, that could be going on here.