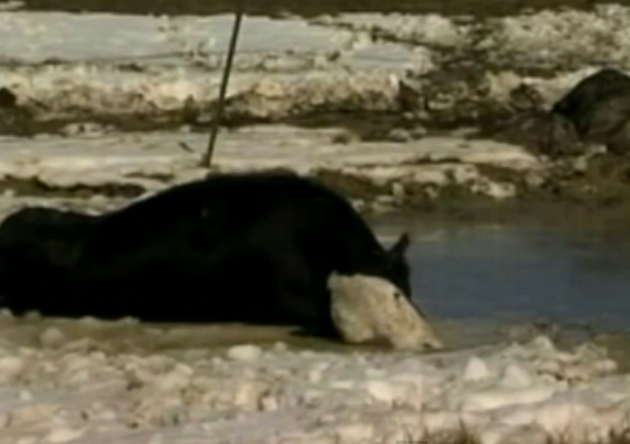 Last Wednesday, the weather was sunny and warm at Bob Fortune’s cattle ranch in Belvidere, S.D. On Thursday, it started raining. By Friday night, the rain had turned to snow. By the weekend, the snow turned to a blizzard with 60 mile an hour winds. By the weekend, Fortune says, “the cattle just couldn’t stand the cold anymore, and they just started dying.”

Only a year after sweeping drought left ranchers across South Dakota desperate for feed, this week they’re just beginning to reckon with a freak early snowstorm, dubbed Winter Storm Atlas, that wiped out an estimated 10 percent of the cattle in the state’s western region, up to 100,000 animals. In the coming weeks they will dig through the mess to try to tally the damage to an industry worth $5.2 billion statewide, that also killed an unknown number of horses, sheep, and wildlife. Fortune, president of the South Dakota Stockgrowers Association, says losses like this would be enough to cripple many ranchers even in the best of times, especially with the loss of future calves next spring whose would-be mothers were killed. But with the federal Department of Agriculture still shut down, ranchers are cut off from the livestock insurance that would normally keep them afloat following a disaster like this.

“We have no idea if there’ll be federal aid for these ranchers,” Fortune says.

“We have no idea if there’ll be federal aid for these ranchers,” Fortune says.

After catastrophes, livestock producers typically turn to the federal Farm Service Agency’s livestock indemnity program, which offers compensation for lost cattle, pigs, sheep, chickens, and other livestock. As long as the government stays shut, FSA offices nationwide will be shut too, leaving ranchers without support. A spokesperson for the state’s Department of Agriculture said the most their office can do is offer advice on how to document and carry out a cleanup effort. Even before the shutdown, the insurance program was already threatened by delayed passage of a new federal farm bill, which allots money for a range of food and ag-related programs from food stamps to incentives to go organic. While the shutdown debate rages, the Senate and House are still hashing out the farm bill, leaving the livestock indemnity program in midair.

The weekend blizzard, which dumped up to five feet of snow in some places, was “very historic,” according to meteorologist Darren Clabo at the South Dakota School of Mines and Technology’s Institute of Atmospheric Sciences. Rapid City, the largest city in the state’s western half, received the most snowfall ever recorded in October, and the third-highest one-day snowfall for any time of year. While South Dakota residents and ranchers are accustomed to brutal winters, Clabo said, “we don’t get these kinds of storms in the first week of October.” That means that cattle were still covered in thin summer coats, and left out in exposed summer pastures. 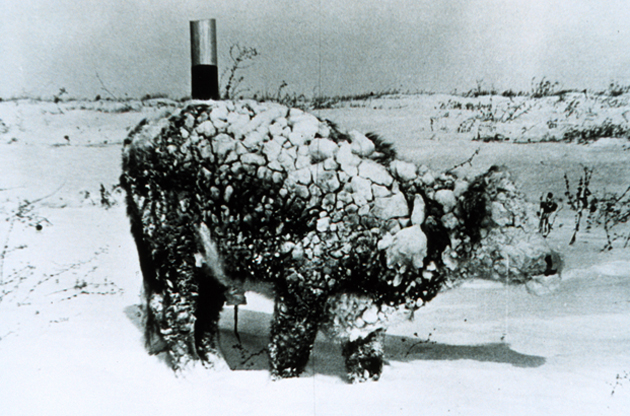 A snow-covered steer in South Dakota after a blizzard in 1966. Ranchers are still reeling from this weekend’s blizzard. NOAA

The storm, Clabo said, was the result of a strong high-altitude storm that pushed in quickly from the Pacific, gathered energy over the Rockies, and peaked just over Rapid City. While it’s too early to say what role climate change might have played in this particular storm, higher levels of heat trapped in the atmosphere can result in more frequent and severe storms. Last month’s IPCC report found it “very likely” that extreme precipitation events like blizzards will increase over this century.

For now, the South Dakota state Department of Agriculture is picking up the slack as best it can, urging ranchers to fully document their losses so they can get aid if and when it reappears, said spokesperson Jamie Crew. Meanwhile, Fortune and his peers will continue to dispose of dead livestock, which state law requires be cleaned up within 36 hours for public health reasons.