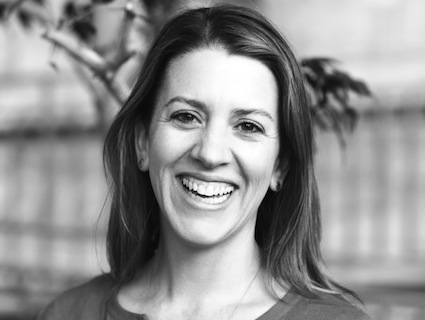 In her work as a critic of the food and agriculture industries, Anna Lappé is carrying on a family business. Her mother, Frances Moore Lappé, brought out the seminal Diet for a Small Planet in 1971, and its central argument, that hunger comes from an unjust allocation of resources, not a lack of food, remains relevant today. Her father, the late toxicologist Marc Lappé, was an early, persistent critic of the agrichemical industry and what its products do to the people they touch—including penning the prescient book about the threat of antibiotic resistance, Germs That Won’t Die, in 1982. Anna has emerged as a leading voice in her own right. Her 2010 book, Diet for a Hot Planet: The Climate Crisis at the End of Your Fork and What You Can Do about It, was a trailblazing work that teased out the connections between our food production system and climate change.

Her latest project, Food MythBusters, is a series of videos designed to counter the vast resources marshaled by the food and agrichemical industries in food policy debates. I recently caught up with Anna on the phone from her home in Oakland, California.

Mother Jones: What inspired you to start this project?

Anna Lappé: Those of us who think about what we eat, how it’s grown, those of us who care about the environmental impact of food—we’ve been educated over the past decade or so by fabulous books, like Fast Food Nation and documentaries like Food Inc. But despite these and other great projects that shine a critical light on the topic, every year the food industry spends literally tens of millions of dollars to shape the public conversation about our food system.

So I wanted to get together some of my favorite food and farm organizations and figure out a way to create new media, a new online resource center, and organize grassroots events that would help people rethink the frame that we’re hearing from the food industry and help people pose the question: What’s the real story about our food? How do we make sense and tease out the truth from the misinformation the food industry is putting out there?

MJ: In addition to overt marketing and lobbying, I’ve noted a real push by the industry to infiltrate social media.

AL: Part of what the food industry does with public relations, just like the chemical industry or the oil industry, is to try to erase their fingerprints from their messaging. So when consumers hear about a recent effort like the “food dialogues” put on by a group called the US Farmers and Ranchers Alliance, do they know necessarily that these “dialogues” are being funded by companies like Monsanto, a large chemical company and the controller of most of the patents on genetically modified seeds? No, they don’t. Do they know that DuPont and Syngenta and John Deere and other agribusiness companies are funders of the US Farmers and Ranchers Alliance? They don’t. Do they know that there isn’t a single organic farmer organization that’s a part of that Alliance?

MJ: As a result of these efforts, I hear a lot of smart, informed people saying, “Don’t we need GMOs to feed the world?”

AL: Watch our first mythbusting movie, which takes on exactly that question! The agrichemical manufacturers and GMO companies—they are the same companies, of course—have really pushed this frame, this idea that we have no choice but to turn to these technologies.

Yes, there is a crisis of hunger on the planet, but as my mother has been saying for 40 years, hunger is not caused by a scarcity of food but a scarcity of democracy.

To argue that we need some technology in order to produce food to tackle hunger is completely blind to the facts on the ground. Actually, what we need is the exact opposite of what GMOs give us. We have to empower farmers to grow food for themselves and plant and grow their own seeds and use practices to deal with weeds and the need for fertility, not from purchased products like a seed or a chemical, but from their own farms, from their own knowledge and skill sets. GMOs are not the answer for a lot of reasons, but those are some of the main ones.

MJ: Let’s drill down a bit into your latest video, on the barrage of junk-food marketing that targets kids. Why do we need restrictions on marketing to junk food—aren’t companies just giving people what they want?

AL: The food industry is spending almost $2 billion a year marketing directly to children and teens. We know that those ads lead to children demanding certain brands, and we know that food and drink marketing gets all of us to consume more calories.

If we’re going to address diet-related illnesses, talking about marketing to kids is a key step. There should be places like schools that are protected sanctuaries from commercialization and from advertising, especially when it comes to kids’ health.

MJ: I did a piece a while back about how something like 80 percent of public schools have exclusive marketing agreements with Pepsi or Coke. How pervasive is this kind of marketing?

AL: It’s a lot more pervasive than many of us think. One of the most common responses I get is, “Just turn off your television! Then your kids won’t see ads. Or don’t even have a television in your house.”

People would be outraged if they saw Shrek on a box of Marlboros, but somehow are not as outraged when they see Shrek on a fast-food box.

People don’t realize how much the food industry has infiltrated all aspects of our children’s lived experience, including their experience at school. There are sponsored curricula by food companies—there’s a Reese’s Pieces counting book, there’s an Oreo counting book. They’re also in our schools with logos sponsoring sports teams.

Just in the past couple of years, there’s been pushback against some of that marketing, as parents have gotten really upset. Now we’re seeing Coke and Pepsi kind of shape-shifting. Instead of doing these very explicit marketing deals, they are getting into schools in much more hidden ways—things like My Coke Rewards, where they encourage schools to push their student body to purchase Coke products, in exchange for points that go toward various products for the school. It’s a way for these companies to get in front of kids, presented as a form of charity.

MJ: So what should public policy do about marketing to kids?

AL: When people hear about legal restrictions on marketing and advertising, often the response is: Aren’t you just being a food nanny? Isn’t that government playing too much of a role in our lives? Isn’t it really up to parents?

When people have that response, they’re forgetting the extent to which what kids are eating and drinking is having as much of an impact on their lives as, say, if they were starting to smoke cigarettes as teenagers. Diet-related illnesses are causing nearly as many deaths as tobacco-related illnesses, not to mention the impact on quality of life when you start to develop adult-onset diabetes as a child, or all these other diet-related illnesses. People would be outraged if they saw Shrek on a box of Marlboro cigarettes, but somehow are not as outraged when they see Shrek on a fast-food box.

MJ: What do you make of Michelle Obama’s intervention into the kids’ health debate through her Let’s Move campaign?

AL: Recently the first lady held an impressive meeting on marketing to kids at the White House with about 100 people, including advocates for child health as well as representatives from Coke, Pepsi, and a number of other food companies. I applaud her and I feel it’s high time we had that conversation.

My concern is that, as this conversation unfolds, we need to remain very skeptical when the food industry insists the solution is self-regulation. Just the week before Michelle Obama’s event, a study funded by the Robert Wood Johnson Foundation came out that looked at what self-regulation of marketing targeted to kids has gotten us. The study found that self-regulation has failed. What’s really going to make a difference here is real regulation—policymaking, not industry promises.

MJ: What would you say is the most insidious food myth that people, maybe even progressive-leaning people, still cling to?

AL: Even very progressive, informed people still get tongue-tied responding to the question, can organic and sustainably raised food still feed the world? A corollary to that question, and one we certainly hear a lot these days, is that genetically modified foods are better for the environment because they use fewer chemicals, which has been thoroughly debunked.

Also, people still have this myth that we can’t pay food system workers more without hurting poor people, because it would make food cost more—even though the lowest-paid, most-exploited workers in the economy are food workers. So if you paid food workers more, they would be able to buy food for themselves. You could increase farmworker wages significantly and not change the price to the consumer at all—for instance, if you redistribute how revenue is paid out across the food chain. Labor costs, particularly farm labor, is a tiny portion of the price we pay at the supermarket.