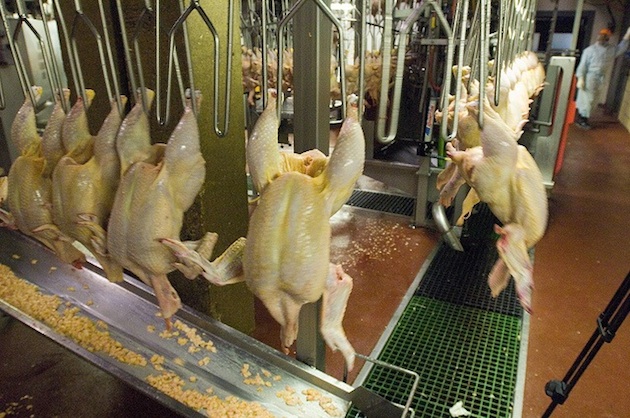 Remember that proposed US Department of Agriculture plan to speed up kill lines at factory-scale poultry slaughterhouses, and cut way back on the number of USDA inspectors to oversee them?

Part of the proposed plan involves allowing the poultry companies to ramp up the antimicrobial sprays they aim at bird carcasses as they zoom along the kill line—a chemical fix to the problem of the various pathogens, often antibiotic-resistant, that are commonly found on chicken, including salmonella and campylobacter. A recent Washington Post story by Kimberly Kindy delivers an ominous taste of what this chemical deluge could mean for both the safety of the chicken you eat and that of the workers who prep it for you.

As Kindy shows, even without the new rules in place, the “number and strength of chemicals used on poultry-processing lines is [already] increasing,” in response to a separate USDA effort to slash the pathogen load on chicken. But get this: Kindy reports that there’s evidence that the chemical cascade is masking, rather than reducing, the amount of disease-causing bacteria on your supermarket bird.

Here’s how the system is supposed to work, Kindy writes:

As the chicken moves down the processing line, the bird is sprayed with, and bathed in, an average of four different chemicals. To check that most bacteria have been killed, occasional test birds are pulled off the line and tossed into plastic bags filled with a solution that collects any remaining pathogens. That solution is sent to a lab for testing, which takes place about 24 hours later. Meanwhile, the bird is placed back on the line and is ultimately packaged, shipped and sold.

But for the pathogen tests to be accurate, the bacteria-killing chemicals must be rapidly neutralized by the solution—”something that routinely occurred with the older, weaker antibacterial chemicals,” Kindy writes. If the chemicals aren’t neutralized and instead continue working, the tests will deliver results indicating that the birds are more free of pathogens—and safer to eat—than they actually are.

There’s circumstantial evidence that new, stronger chemicals are indeed compromising the validity of the tests. For one thing, according to the USDA’s testing program, the rate at which salmonella is found on chicken carcasses has plunged by half over the past few years, Kindy reports. Great, right? Except that, according to the Centers for Disease Control, the actual rates of salmonella infection among the general public have barely budged. (Campylobacteria, meanwhile, have risen.) Salmonella still leads to more hospitalizations and deaths than any other food-borne pathogen. Poultry products are a major source of salmonella poisoning, the CDC reports.

Meanwhile, the companies that make the chemicals are feuding among themselves, accusing each other of selling sprays that compromise the USDA’s testing, Kindy reports. And the USDA’s Food Safety and Inspection Service is taking these claims seriously. In a written statement, an FSIS spokesperson told me that the department is “assessing” the claims and will “take appropriate steps to adjust our policies and procedures if warranted to ensure that America’s supply of meat and poultry are safe to eat.”

Kindy also reports that the chemical cocktail now soaking our birds has increased in variety and strength—from an average of two distinct chemicals per kill line a decade ago to four today, and from dilution rates of 20 to 30 parts per million of active ingredient in the 1980s to as much as 8,000 parts per million now.

“Government agencies have not conducted independent research into the possible side effects on consumers of using the chemicals.”

Then there’s the question of whether this chemical cascade is leaving residues on chicken and exposing consumers to toxins. According to another Kindy article, this one from April, “government agencies have not conducted independent research into the possible side effects on consumers of using the chemicals.”

But the people most exposed, of course, are line workers and USDA inspectors. And here, too, little or no research has been conducted. According to Kindy, no industry-wide study has been conducted by the USDA or any other government agency, and nor does USDA “keep a comprehensive record of illnesses possibly caused by the use of chemicals in the poultry industry.”

Kindy’s April piece documents the grim story of a USDA inspector named Jose Navarro at a New York poultry plant, who died of hemorrhaging in his lungs in 2006. She quotes documents showing that, after Navarro’s death, Occupational Safety and Health Administration inspectors expressed concern about how an “increase in use of disinfectants” and the “combination of disinfectants and other chemicals” could be “causing significant health problems for processing plant occupants.”

Meanwhile, the USDA’s proposed overhaul to its poultry-inspection system—which would only ramp up reliance on this dodgy practice—looms. As I reported in April, USDA chief Tom Vilsack signaled that the new system would be rolled out “very soon.”  According to a USDA spokesperson I contacted Wednesday, the department has “no updates” on when the department will roll out the controversial plan.

The USDA makes great claims for the scheme: that it will improve food safety while cutting taxpayers costs by $90 million over three years. The sped-up kill lines will save the poultry industry a cool quarter-billion dollars per year, the department adds.

No word yet on the potential costs associated with the health of the chicken-eating public or to the workers and inspectors who oversee kill lines.