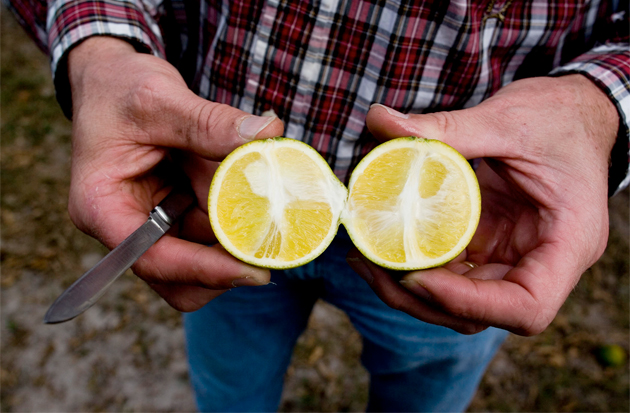 In a July 27 feature article that set the interwebs aflame, New York Times reporter Amy Harmon told the tale of a bacterial pathogen that’s stalking the globe’s citrus trees, and a Florida orange juice company’s effort to find a solution to the problem through genetic engineering.

An invasive insect called the Asian citrus psyllids carries the bacteria, known as Candidatus Liberibacter, from tree to tree, and it causes oranges and other citrus fruits to turn green and rot. “Citrus greening,” as the condition has become known, has emerged as a pest nearly wherever citrus is grown globally. Harmon reported that an “emerging scientific consensus” holds that only genetic engineering can defeat it.

The “2 many industry talking pts” bit earned him an outpouring of bile from GMO industry defenders (see here and here, as well as responses to Pollans’s tweet). But after digging a bit into the citrus-greening problem, I think Pollan’s pithy construction essentially nailed it. Harmon’s story does contain some unchallenged industry talking points, yet it is also an important contribution, because citrus greening might just be one of the few areas wherein GM technology might be legitimately useful.

As for unexamined industry talking points, Harmon declares that “dozens of long-term animal feeding studies had concluded that existing G.M.O.s were as safe as other crops, and the National Academy of Sciences, the World Health Organization and others had issued statements to the same effect,” echoing an often-repeated industry claim.

But as the Union of Concerned Scientists’ Doug Gurian-Sherman, who worked as a scientist assessing biotech risk at the Environmental Protection Agency, has shown (see here and here), the situation is a bit more complicated than that. He writes: “No long-term safety tests in animals are required by any regulatory agency. In some circumstances, 90-day, so-called sub-chronic tests may be required in Europe. But 90 days is far short of the one to two years that usually satisfy long-term safety test requirements.”

And the World Health Organization has this to say: “Individual GM foods and their safety should be assessed on a case-by-case basis and that it is not possible to make general statements on the safety of all GM foods.”

They scoured Central Florida’s half-million acres of emerald groves and sent search parties around the world to find a naturally immune tree that could serve as a new progenitor for a crop that has thrived in the state since its arrival, it is said, with Ponce de León. But such a tree did not exist. “In all of cultivated citrus, there is no evidence of immunity,” the plant pathologist heading a National Research Council task force on the disease said.

And that’s the last we hear of conventional breeding as a possible solution in the piece. But I talked to Ed Stover, a geneticist at the US Horticultural Research Laboratory, who has been working on the citrus-greening problem since 2008, and got a more nuanced perspective.

“At this point it appears that transgenics may be our best hope of true immunity.”

“We are seeing what appears to be substantial resistance, or tolerance, [to the greening bacteria] in a handful of genotypes of conventional citrus,” he told me. And they’re intercrossing these genotypes together to create a pyramid effect—orange plants with the genetic makeup to resist greening in several distinct ways.

But there’s a “but”: “We’re not sure at this point that what we’re seeing as tolerance or resistance will be robust in the face of diverse strains of Liberibacter,” the bacteria that causes greening, he said.

And that’s where we get to the transgenic solutions chronicled by Harmon. Stover told me that while his conventional methods promise to deliver resistance to greening at least for a while, “at this point it appears that transgenics may be our best hope of true immunity.”

Then we got into a discussion of “resistance” or “tolerance” on the one hand, and “immunity” on the other. The first category would include plants that would become infected with the greening bacteria, but still be able to function and produce fruit—they way you might be able to, say, shake off a mild cold and still go to work. The second category, immune trees, wouldn’t be infected by the bacteria at all. And that is what GM citrus project Harmon describes is promising, Stover said.

However, he wrote in a follow-up email, GM-conferred immunity wouldn’t necessarily be permanent. A scenario wherein the greening bacteria develops resistance to the GM plants “is always possible” he wrote. He added:

Plant breeding for disease resistance is often an ongoing process, with new lines needed as the pathogen evolves. I don’t think any of the folks working on transgenic citrus believe that the lines they produce will never be improved or bested.

I got a similar perspective from Tim Gottwald, a plant pathologist at the US Horticultural Research Laboratory in Florida. Gottwald spent years studying a possible biodiversity-based solution to greening. Farmers in Vietnam discovered that when they interplanted citrus with guava, a tropical fruit tree, volatile chemicals produced by the guava seemed to inhibit the spread of the greening bug.

When he tested the method in Florida, “it didn’t work,” he told me. One reason is that since they evolved to thrive year-round in warm weather, guava trees go dormant in Florida’s winters. And that means no volatile chemicals for a swath of the year—and an opportunity for greening to establish itself. Gottwald, like Stover, told me that he thought GMOs offered the most promise for fighting off the scourge of greening.

Of course, the Candidatus Liberibacter bacteria has proven to be a tenacious pathogen, and while the GM trees that Harmon writes about are working in research plots, none is at the stage where it has proven to flourish in the field at large scale.

And as Washington State University research professor Charles Benbrook told me, the threat of resistance is real. “There’s no reason to believe that a gene that’s turned on all the time in the plant is going to last any longer than a typical chemical [pesticide] solution in terms of the evolution of resistance,” he said. Bacterial pathogens often develop resistance to pesticides in three to five years, he added.

Benbrook said that systemic, multipronged approaches to fighting a tough pathogen like Candidatus Liberibacter are the most stable and resilient. And GM solutions might be a part such a strategy in the case of citrus, but aren’t likely to be effective in the long term on their own.

As for the holes in the safety-testing system pointed out by Gurian-Sherman and the related consumer resistance to GM orange juice discussed by Harmon, Benbrook suggested that the solution would be for the broader ag-biotech industry, in conjunction with the Florida orange industry and the USDA, invest in independent, multigenerational safety testing. If no problems come up in such an open, transparent testing regime for GM orange juice—which he added would be quite expensive—”then I think critics will back off,” he said.

So in the case of Florida’s beleaguered orange industry, GM technology offers promise, but no panacea.