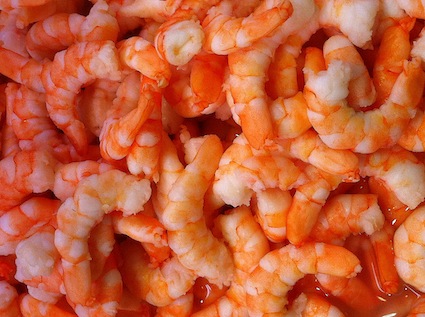 Over the past 20 years, the rapid rise of South Asian shrimp farms has transformed our relationship to the tasty crustaceans, shifting it from an occasional luxury to an all-you-can-eat commodity *. Twenty years ago, most of our shrimp came from domestic wild fisheries. Today, we import 90 percent of it, almost all of it farmed. But who works on these foreign farms and processing facilities—and under what conditions? A new briefing paper by the well-respected International Labor Rights Forum and the Warehouse Workers United (WWU) alleges serious labor abuses, including illegal use of underage workers, at the Thai shrimp producer Narong Seafood, at least until recently a major supplier of Walmart and a leading shrimp processor for the US market, according to a recent analysis by the consultancy Accenture for Humanity United.

Narong, for its part, disputes the charges in the report. “We insist that Narong is against child labor or any unfair treatment to our staff or workers,” a company official wrote in an emailed statement.

Yet Walmart says it stopped buying from Narong in 2012, as a “result of our auditing process.” The Walmart press officer I corresponded with declined to divulge any details of the company’s audit, but added that “Walmart does not—and will not—tolerate child labor of any type in our supply chain.”

An Excel document, supplied to me by Elizabeth Brennan of Warehouse Workers United and generated from a search of US customs data, suggests that Walmart may have imported 36,000 pounds of Narong shrimp as recently as March 21, 2013, through a middleman US company called National Fish and Seafood—directly contradicting the company’s claim that it had stopped buying Narong shrimp in 2012. (Go to row 199, and check out the “commodity” column.) I emailed the Walmart press officer with the document. His response raised more questions about the transparency of the shrimp supply chain than it answers: “The line you’re referring to involves a supplier called National Seafood. When asked about these shipping documents, they [National Seafood] said that Narong was only used for their export license and the product was processed at a different facility.”

In response, I asked, if that 36,000 pounds of shrimp didn’t come from Narong, then what processor did it come from? And had that processor been audited for its labor practices—and if so, why didn’t it have its own export license to use? One might assume that a processor with the wherewithal to be audited by foreign buyers would have its paperwork together to legally export its goods. “We have nothing further to share,” the press officer replied. I contacted National Fish and Seafood to get its response to Walmart’s account of the 36,000-pound shrimp buy that went down on March 21. I spoke with and exchanged emails with a company spokesman, but he has stopped returning calls and emails.

Walmart’s claim that it stopped buying Narong’s products based on an audit in 2012 raises another question. Like many prominent US fish retailers, Walmart relies on the Best Aquaculture Practices program to ensure that the farmed seafood it buys is ethically produced. BAP’s guidelines state that “farms shall comply with local and national labor laws to assure adequate worker safety, compensation and living conditions at the facility.” But the BAP program is run by the the Global Aquaculture Alliance, a group dominated by large US interests like Darden (which owns Red Lobster), agribusiness giant (and fish feed supplier) Cargill, the Chilean salmon industry, and a large farmed-shrimp importer called Eastern Fish Company. So BAP is not exactly an independent watchdog.

Narong remains certified by BAP to this day. The Global Aquaculture Alliance, the trade group that runs the BAP certification program, has issued a press release declaring that it “takes very seriously the accusations of labor abuse” and that it’s “determining a corrective course of action to ensure that the shrimp processing plant cited in the brief is adhering to Thai labor laws and the Best Aquaculture Practices (BAP) standards.” Steven Hedlund, communications manager at Global Aquaculture Alliance, told me that BAP had conducted its annual audit of the Narong facility in September 2012, found it acceptable, and recertified it in October.

The report found that underage employees were forced to work the night shift in order to avoid inspections.

Walmart wouldn’t tell me when in 2012 it conducted the audit that inspired it to cut off Narong, but it told both the Wall Street Journal and the trade journal Undercurrent that it had stopped buying Narong shrimp in June 2012. If that’s true, it’s remarkable that a year after being deemed unacceptable by the biggest US buyer of shrimp, Walmart, Narong remains certified by BAP, the main US auditor of imported farmed fish suppliers.

For the report, the International Labor Rights Forum and the Warehouse Workers United commissioned Thai-based researchers to interview Narong workers earlier this year. They found that factory inspections by international buyers, auditors, and Thai Labor Ministry officials were always announced in advance and cursory; that underage employees were forced to work the night shift in order to avoid these inspections; that wages were illegally slashed after a slowdown; and that undocumented foreign workers were charged exorbitant fees for work papers. In an emailed statement, a Narong official said the company doesn’t use underage workers for the night shift, insisted that it pays workers in accordance with Thai law, and denied overcharging foreign workers for documentation.

The report also found to the industry-led inspection system flawed:

BAP audits, as with the audits Walmart conducts to verify compliance with its “Standards for Suppliers,” are not subject to public review or verification by outside organizations. Contrary to Walmart’s claims that third?party audits are unannounced the initial audit, our research indicates that Narong managers knew about inspections in advance and adjusted to be in compliance.

Walmart disputes this point. “Our third-party audits are unannounced,” a company spokesperson wrote in an email. He added that the “the audit process worked” because “as a result of our auditing process, the Narong Seafood facility was red-disapproved [i.e., lost its ability to sell to Walmart] in 2012.”

The International Labor Rights Forum/Warehouse Workers United assessment is consistent with other independent reporting on labor conditions in Thailand’s shrimp industry as a whole. Accenture’s report on the industry found that “exploitative labor practices have been established and institutionalized in an industry where significant export revenues and profits have accrued to transnational companies and to local elites.”

And in a September 2012 Washington Post piece, Jason Motlagh found that “overseas demand for shrimp products in greater volume has fueled a culture of exploitation in the Thai industry.” (Motlagh didn’t name any particular suppliers.) He interviewed a 14-year-old Burmese immigrant who “pulled 16-hour shifts, seven days a week, for less than $3 a day.” Conditions approached slavery:

Although she was the best peeler in the factory, speed was never enough. Mon was beaten if she slowed down, she said, and when she asked for a day off to rest hands swollen with infection, her boss kicked her and threatened rape.

Also in September 2012, Human Rights Watch came out with a scathing report on migrant workers throughout Thailand’s shrimp industry.

Labor strife isn’t the only problem that underpins our love affair with cheap shrimp. In my January/February 2013 magazine column (online here), I focused on food safety issues: the often-fetid conditions of shrimp farms, the prevalence of antibiotics and antibiotic-resistant bacteria, and the Food and Drug Administration’s almost comically minimalist approach to testing imported seafood for residues and pathogens. Then there are the environmental issues: Asian shrimp farms tend to be built on cleared mangrove forests, a disaster for climate stability, biodiversity, and the people who had been living in those former fishing communities.

Unfortunately, we’re apparently getting a side of human misery, dodgy chemicals, and ecological destruction along with our all-you-can-eat feasts.

*Correction: The original version of this article mistakenly called shrimp a mollusk.