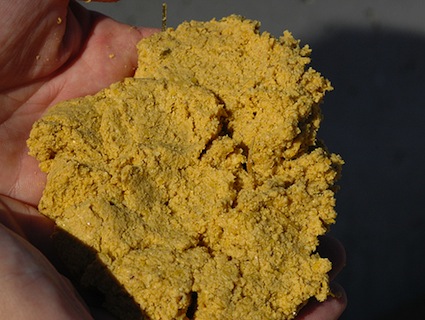 This stuff makes the ethanol industry profitable—and boosts the E. coli in your burger. <a href="http://www.flickr.com/photos/agrilifetoday/5011935628/">Texas AgriLIfe Research photo by Kay Ledbetter</a>/Flickr

Back in 2007, amid a boom in US corn-based ethanol, researchers at Kansas State University released a sobering study involving distillers grains—the mash that’s left over after corn has been fermented and distilled into ethanol. As various government programs ramped up ethanol production—and with it the price of corn—the livestock industry was increasingly turning to distillers grains as a cheap corn substitute. But the Kansas researchers found that the stuff seemed to cause a spike in a particularly dangerous-to-humans form of E. coli in the cows’ guts.

“Distiller’s grain is a good animal feed,” the study’s lead researcher said in a press release. But its tendency to boost the potentially deadly E. coli 0157 strain “is likely to have profound implications in food safety.”

The US Department of Agriculture, which is responsible for monitoring the safety of meat products, acknowledged the problem from the start. The USDA’s then-undersecretary for food safety, Richard Raymond, told the Des Moines Register in early 2008 that he thought distillers grains were one of several factors behind the massive spike in recalls of E. coli 0157-tainted beef that had occurred in 2007. And he also telegraphed the department’s strategy for responding to the threat: inaction. Here’s the Register:

Raymond said the government had no intention of restricting the use of distillers grains even if the E. coli link is confirmed, and would instead leave it to the industry to decide how to address the issue. One possibility, he said, is to vaccinate cattle.

“I’m not about to tell the cattlemen what they are going to feed their cows,” he said.

But as the Register noted—and as remains true today—there is no approved E. coli vaccine.

Since then, of course, the ethanol boom has continued—production has more than doubled since 2007—corn prices have stayed high, and livestock operations consume massive amounts of distillers grains.

In 2012, distillers grain accounted for more than a quarter of ethanol makers’ total revenue. “Distillers may become the product and ethanol the byproduct,” said one agribusiness professor.

And the USDA? Well, it’s still acknowledging the E. coli problem. In fact, it turns out that the department’s own researchers at a lab in Nebraska have been studying the issue since 2007 and finding that, yes, distillers grains do ramp up E. coli 0157 in the guts of cattle. And last week, lead researcher James Wells reported the latest results to Food Safety News and Iowa Farmer. Yet again, they found that the higher the content of distillers grains in cows’ diets, the higher the level of the notorious pathogen in the cows’ hide and manure.

And again, there’s no indication that the USDA will crack down on the feeding of distillers grains. And that may be because such an action would be disastrous for the ethanol industry, which is largely propped up by the government’s “renewable fuel” mandates, which force the gasoline makers to mix ethanol into car fuel. Ethanol producers operate on tight margins, and and revenue from distillers grains is becoming increasingly central to the industry’s business model, the trade journal Midwest Producer recently reported. Five to seven years ago, distillers grains brought in between 15 percent and 17 percent of revenue for ethanol makers. By 2012, the level had increased to up to 26 percent.

Indeed, University of Nebraska-Lincoln agribusiness professor Dennis Conley told the magazine that distillers grains may soon take the place of ethanol as the industry’s main act. “We’re set on ethanol as the product and distillers grains as the byproduct, but that could shift,” he told the magazine. “Distillers may become the product and ethanol the byproduct.”

Take it away, and the industry might crumble. In essence, the entire corn ethanol edifice hinges on a product the USDA openly acknowledges boosts the pathogen load in beef.