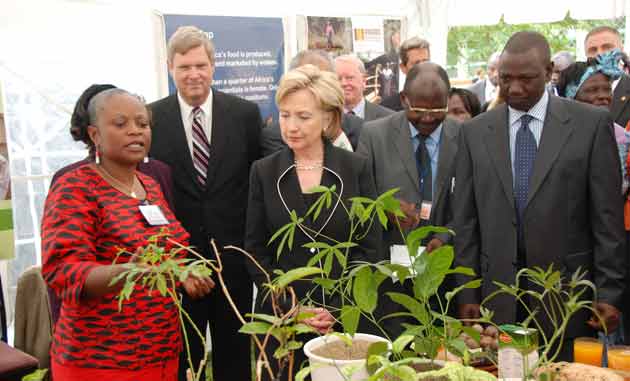 Nearly two decades after their mid-’90s debut in US farm fields, GMO seeds are looking less and less promising. Do the industry’s products ramp up crop yields? The Union of Concerned Scientists looked at that question in detail for a 2009 study. Short answer: marginally, if at all. Do they lead to reduced pesticide use? No; in fact, the opposite.

And why would they, when the handful of companies that dominate GMO seeds—Monsanto, DuPont, Syngenta, Dow—are also among the globe’s largest pesticide makers? Monsanto’s Roundup Ready seeds have given rise to an upsurge of herbicide-resistant superweeds and a torrent of herbicides, while insects are showing resistance to its pesticide-containing Bt crops and causing farmers to boost insecticide use. What about wonder crops that would be genetically engineered to withstand drought or require less nitrogen fertilizer? So far, they haven’t panned out—and there’s little evidence they ever will.

Yet despite all of these problems, the US State Department has been essentially acting as a de facto global-marketing arm of the ag-biotech industry, complete with figures as high-ranking as former Secretary of State Hillary Clinton mouthing industry talking points as if they were gospel, a new Food & Water Watch analysis of internal documents finds.

The FWW report is based on an analysis of diplomatic cables, written between 2005 and 2009 and released in the big Wikileaks document dump of 2010. FWW sums it up: “a concerted strategy to promote agricultural biotechnology overseas, compel countries to import biotech crops and foods that they do not want, and lobby foreign governments—especially in the developing world—to adopt policies to pave the way to cultivate biotech crops.”

The report brims with examples of the US government promoting the biotech industry abroad. Here are a few:

The State Department encouraged embassies to bring visitors—especially reporters—to the United States, which has “proven to be effective ways of dispelling concerns about biotech [crops].” The State Department organized or sponsored 28 junkets from 17 countries between 2005 and 2009. In 2008, when the US embassy was trying to prevent Poland from adopting a ban on biotech livestock feed, the State Department brought a delegation of high-level Polish government agriculture officials to meet with the USDA in Washington, tour Michigan State University and visit the Chicago Board of Trade. The USDA sponsored a trip for El Salvador’s Minister of Agriculture and Livestock to visit Pioneer Hi-Bred’s Iowa facilities and to meet with USDA Secretary Tom Vilsack that was expected to “pay rich dividends by helping [the Minister] clearly advocate policy positions in our mutual bilateral interests.”

Another example: This 2009 cable, referenced in the FWW report, shows a State Department functionary casually requesting US taxpayer funds to combat a popular effort to require labeling of GMO foods in Hong Kong—and boasting about successfully having done so in the past. Why focus on the GMO policy of a quasi-independent city? Hong Kong’s rejection of a mandatory labeling policy “could have influential spillover effects in the region, including Taiwan, mainland China and Southeast Asia,” the functionary writes, adding that her consulate had “intentionally designed [anti-labeling] programs other embassies and consulates” could use.

The report also shows how the State Department hotly pushed GMOs in low-income African nations—in the face of popular opposition. In a 2009 cable, FWW shows, the US embassy in Nigeria bragged that “U.S. government support in drafting [pro-biotech] legislation as well as sensitizing key stakeholders through a public outreach program” helped pass an industry-friendly law. Working with USAID—an independent US government agency that operates under the State Department’s authority—the State Department pushed similar efforts in Kenya and Ghana, FWW shows.

Yet, as FWW points out, in so aggressively pushing biotech solutions abroad, the State Department is bucking against the global consensus of ag development experts as expressed by the 2009 International Assessment of Agricultural Knowledge, Science and Technology for Development (IAASTD), a three-year project convened by the World Bank and the United Nations and completed in 2008 to assess what forms of agriculture would best meet the world’s needs in a time of rapid climate change. The IAASTD took such a skeptical view of deregulated biotech as a panacea for the globe’s food challenges that Croplife America, the industry’s main industry lobbying group, saw fit to denounce it. The US government backed up the biotech lobby on this one—just 3 of the 61 governments that participated refused to sign the IAASTD: the Bush II-led United States, Canada, and Australia.

So why are our corps of diplomats behaving as if they answered to Monsanto’s shareholders with regard to ag policy? My guess is GMO seed technology, dominated by Monsanto, as well as our towering corn and soy crops (which are at this point almost completely from GM seeds) are two of the few areas of global trade wherein the US still generates a trade surplus. The website of the State Department’s Biotechnology and Textile Trade Policy Division puts it like this:

In 2013, the United States is forecasted to export $145 billion in agricultural products, which is $9.2 billion above fiscal 2012 exports, and have a trade surplus of $30 billion in our agricultural sector.

I guess US presidents, Democratic and Republican alike, are bent on preserving and expanding that surplus. President Obama altered much about US foreign policy when he took over for President Bush in 2009, but he doesn’t seem to have changed a thing when it comes to pushing biotech on the global stage. And the impulse is not confined to the State Department. Back in 2009, when Obama needed to appoint someone to lead agriculture negotiations at the US Trade Office, he went straight to the ag-biotech industry, tapping the vice president for science and regulatory affairs at CropLife America, Islam A. Siddiqui, who still holds that post today.

Meanwhile, the State Department operates an Office of Agriculture, Biotechnology and Textile Trade Affairs, which exists in part to “maintain open markets for US products derived from modern biotechnology” and “promote acceptance of this promising technology.” The office’s biotechnology page is larded with language that reads like boilerplate from Monsanto promo material: “Agricultural biotechnology helps farmers increase yields, enabling them to produce more food per acre while reducing the need for chemicals, pesticides, water, and tilling. This provides benefits to the environment as well as to the health and livelihood of farmers.”