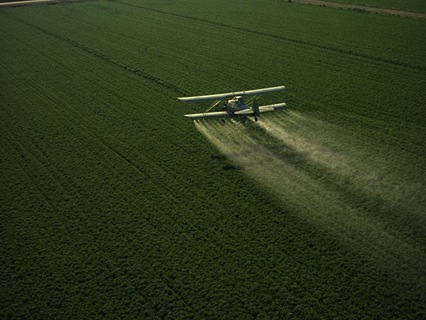 For years, proponents of genetically modified crops have hailed them as a critical tool for weaning farmers from reliance on toxic pesticides. On its website, the GMO-seed-and-agrichemical giant Monsanto makes the green case for its Roundup Ready crops, engineered to withstand the company’s own blockbuster herbicide, Roundup:

Roundup agricultural herbicides and other products are used to sustainably an [sic] effectively control weeds on the farm. Their use on Roundup Ready crops has allowed farmers to conserve fuel, reduce tillage and decrease the overall use of herbicides. [Emphasis added.]

But in a just-released paper published in the peer-reviewed Environmental Sciences Europe, Chuck Benbrook, research professor at Washington State University’s Center for Sustaining Agriculture and Natural Resources, shreds that claim. He found that Monsanto’s Roundup Ready technology, which dominates corn, soy, and cotton farming, has called forth a veritable monsoon of herbicides, both in terms of higher application rates for Roundup, and, in recent years, growing use of other, more-toxic herbicides.

Benbrook found that overall, GMO technology drove up herbicide use by 527 million pounds, or about 11 percent, between 1996 (when Roundup Ready crops first hit farm fields) and 2011. But it gets worse. For several years, the Roundup Ready trait actually did meet Monsanto’s promise of decreasing overall herbicide use—herbicide use dropped by about 2 percent between 1996 and 1999, Benbrook told me in an interview. But then weeds started to develop resistance to Roundup, pushing farmers to apply higher per-acre rates. In 2002, farmers using Roundup Ready soybeans jacked up their Roundup application rates by 21 percent, triggering a 19 million pound overall increase in Roundup use.

Since then, an herbicide gusher has been uncorked. By 2011, farms using Roundup Ready seeds were using 24 percent more herbicide than non-GMO farms planting the same crops, Benbrook told me. What happened? By that time, “in all three crops [corn, soy, and cotton], resistant weeds had fully kicked in,” Benbrook said, and farmers were responding both by ramping up use of Roundup and resorting to older, more toxic herbicides like 2,4-D.

GMOs have added more than four pounds of herbicides to US farm fields for every pound of insecticide they’ve taken away.

Now, biotech industry defenders might counter that the surge in herbicide use is balanced by the other main product offered by the industry: seeds engineered to contain the toxic-to-insects gene found in Bacillus thuringiensis (Bt), a naturally occurring bacterial pesticide. The pitch is this: Rather having to spray corn and cotton with insecticides, plant our Bt seeds, and your insect problems are taken care of.

And just as weeds developed resistance to year-after-year applications of Roundup, corn’s number-one insect pest, the rootworm, is quickly evolving to be able to withstand Bt-engineered corn, as I’ve reported before. Benbrook told me that in areas of the Midwest where farmers have been planting Bt corn year after year—an increasingly popular practice, since the explosion in ethanol production that started in 2006—ag university extension experts are suggesting that farmers spray other insecticides to supplement the failing Bt trait in their corn. “The goal of this technology was to make it possible not have to spray these corn insecticides, and now we have to spray them again to bail out this technology,” Benbrook told me.

The chemical war against pests will likely get yet another boost from the failure of Roundup. As I’ve reported before, GMO seed giants Monsanto and Dow are preparing to roll out seeds designed to resist both Roundup and older herbicides including 2,4-D, the less toxic half of the formulation that made up the infamous Vietnam War defoliant Agent Orange. The industry insists that weeds won’t develop resistance to the new products.  But last year, a group of Penn State weed scientists published a paper warning that the new products are “likely to increase the severity of resistant weeds.” Indeed, 2,4-D-resistant weeds have already been documented in Nebraska.

In his paper, Benbrook created a model for how a 2,4-D-resistant corn product, if released in 2013, would affect 2,4-D use. One of the actual benefits of Roundup Ready technology is that it has until recently made 2,4-D almost obsolete—its use on corn crops went from 4.4 million pounds in 1995 to 2.4 million in 2000. It hovered at that level for a while before jumping to 3.3 million pounds in 2010, as farmers increasingly resorted to it to attack Roundup-resistant weeds. If 2,4-D resistant corn is widely adopted, Benbrook projects, making what he calls “conservative” assumptions, 2,4-D use will hit 103.4 million pounds on corn fields per year by 2019. Overall, Benbrook projects a 30-fold increase in 2,4-D applied between 2000 and 2019. Because 2,4-D is so toxic, the result will not be pretty. Here’s Benbrook’s study:

Such a dramatic increase could pose heightened risk of birth defects and other reproductive problems, more severe impacts on aquatic ecosystems, and more frequent instances of off-target movement and damage to nearby crops and plants.

The only question on GMOs and pesticide use Benbrook’s paper leaves open is: When will Monsanto correct the absurd claim on its website that its highly lucrative technology has allowed farmers to cut back on herbicides?