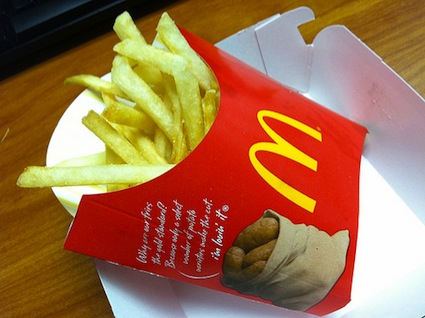 It wasn’t always thus. As recently as 2006, journalist Nina Teicholz could report that consuming a large order of McDonald’s fries and McNuggets in one sitting meant taking in nearly 10 grams of trans fats, a “substance considered so unhealthy that the National Academy of Sciences concluded, in 2002, that the only safe amount of trans fats in the diet is zero.”

Trans fats are made through a process known as partial hydrogenation—basically, when you add hydrogen to ordinary vegetable oil, it becomes solid at room temperature, making it a cheap substitute for butter.

According to Teicholz, probably the journalist most responsible for exposing the ill effects of the once-ubiquitous, now-scarce substance, “A daily intake of five grams of trans fats increases the risk of contracting heart disease 4 percent to 28 percent.”

Apparently, the pushing of trans fats out of the American diet is already paying dividends. A study published last month in the Journal of the American Medical Association found a 28 percent drop in the prevalence of elevated total cholesterol among kids since the 1988-94 period, the heyday of trans fats.

In an interview with Bloomberg, Sarah de Ferranti, who wrote an editorial accompanying the study, fingered the removal of trans fats from the US diet as a key factor. “There is an increased awareness about the harms in trans fats, so manufacturers have removed them,” de Ferranti told the news agency.

So what spurred Big Food to ditch trans fats? The answer is pretty simple. In 2006, the Food and Drug Administration began requiring nutrition labels on foods to include amounts of added trans fats. Once forced to come clean about its use of trans fats, Big Food suddenly lost its appetite for using the heart-ruining product.

But a better question is, why did they hang around for so long? As early as 1994, the Center for Science in the Public Interest petitioned the FDA to require labeling of trans fats. In a 2004 article in Gourmet magazine, Teicholz showed that research had linked small amounts of trans fats to heart trouble for decades, and neither the food industry, nor its ostensible watchdog the Food and Drug Administration, nor medical groups like the American Heart Association, did a damned thing about it. Why did it take until 2006 for the labeling rule to come in place?

Teicholz reported trans-fat production was dominated by agribusiness giants Cargill, Archer Daniels Midland, and Bunge. These companies ran a trade group called the Institute of Shortening and Edible Oils (ISEO), which “for decades” worked “behind the scenes to squelch bad news about trans fats.” Teicholz reported:

As far back as 1968, the ISEO was mentioned in an internal memo written by the medical director of the American Heart Association: According to the memo, the ISEO objected to the AHA’s intention to include a warning about trans fats in its dietary guidelines; subsequently, the AHA took it out.

And the food industry, too, actively sought to repress research showing trans fats’ ill effects. According to Teicholz, independent-minded scientists examining the topic had to “deal with the tidal wave of industry pressure unleashed against them at meetings, conferences, and events. Their papers were rebutted with unusual ferocity, and their research funding was scarce.” The pressures came from the industry’s highest levels:

Dr. Thomas Applewhite and Dr. J. Edward Hunter, industry scientists employed, respectively, by Kraft and Procter & Gamble (which held the original U.S. patent for trans fats), were the principal forces behind this criticism. Given that they worked for two food giants, the potential for bias was apparent, but their ability to fund research (as well as their own encyclopedic knowledge of the field) meant they could exercise considerable influence.

With independent science about its health effects virtually nil, trans fats took on a healthy sheen, promoted by a food industry that was happy to have found a cheap replacement for butter that also worked well in deep frying. By the ’70s, “margarine manufacturers used the slogan ‘Healthy for Your Heart’ and marketed the product like a drug to doctors,” Teicholz reported.

Meanwhile, damage to public health was severe. Teicholz cited Harvard epidemiologist Walter Willett, who reckoned that “of the half million Americans who die prematurely each year from heart disease—the leading cause of death in this country—at least 30,000 are killed by trans fats.”

The breaking point came in 2002, when a panel convened by the National Academy of Sciences produced a scathing report on the effect of trans fats. Spurred by the NAS document, the FDA had little choice but to move on labeling, which it began to require in 2006. Then came bans on using trans fats in restaurants in New York City, Philadelphia, and California. The drop in trans fat consumption was swift—a recent Centers for Disease Control and Prevention study found that trans-fat levels in the blood of white adults plunged by 58 percent between 2000 to 2009. (The fats the industry has seized upon to replace trans fats, palm oil and interesterificated vegetable oil, may present their own problems, both to health and the environment, but that is a topic for another post.)

Although a long time in coming, the melting away of trans fats in the American diet shows that progress can be made—that when independent science can cut through industry-induced fog, and when regulators are compelled to do their job—the American diet can improve. But as the Journal of the American Medical Association article shows, things are still dire. Kids’ cholesterol levels are coming down, the article notes, but obesity and overweight levels remain stubbornly high.

That unhappy fact, I think, stems from another practice the food industry picked up in the late ’70s—adding massive amounts of empty sweeteners to processed food. As the journalist Gary Taubes has shown, the food industry has largely managed to bury a growing body of research on the harms of that habit.