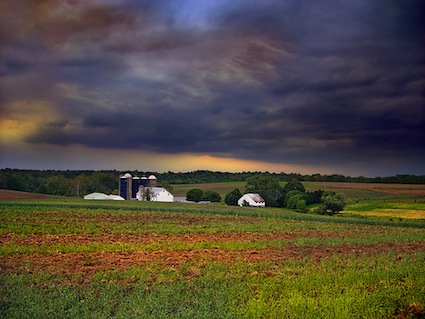 As the climate warms up and “extreme” events like heat waves and droughts become more common, what will become of food production? I started to examine that question in my last post, published Wednesday. A front-page article in Thursday’s New York Times brought a stark reminder of why the topic is crucial. Reports the Times’ Monica Davey:

Already, some farmers in Illinois and Missouri have given up on parched and stunted fields, mowing them over. National experts say parts of five corn-growing states, including Indiana, Kentucky and Ohio, are experiencing severe or extreme drought conditions. And in at least nine states, conditions in one-fifth to one-half of cornfields have been deemed poor or very poor, federal authorities reported this week, a notable shift from the high expectations of just a month ago.

The message from the Midwest is clear: Chemical-intensive, industrial-scale farming is vulnerable to spells of hot, dry weather—some of the very conditions we can expect to become common as the climate warms. In my last post, I argued that the solution to this problem favored by US policymakers—to keep industrial agriculture humming along with novel seeds engineered for “drought tolerance”—probably won’t work.

What might? I think the answer lies outside of some Monsanto-funded university lab and right beneath our feet: in the dirt. Or, more, accurately, in how farmers manage their dirt.

A while back, I wrote about this 2012 Nature paper comparing the productivity of organic and industrial ag systems. The study found that on average, industrial systems produce crop yields on average 25 percent higher than organic ones. (I took issue with some of the assumptions behind that conclusion here.) But under conditions of extreme weather, things change:

In other words, organically managed soils deal with water better—both in conditions of drought and heavy storms (the frequency of which is also expected to increase as the climate changes). Soil rich in organic matter (well-decayed remnants of plants and other living creatures) bolster soil in weather extremes by helping store water in times of scarcity and by holding together and not eroding away during heavy rains. 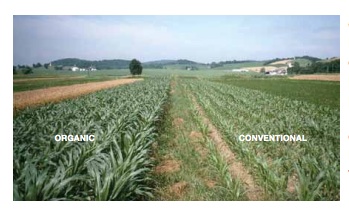 Corn in the [organic] legume-based (left) and conventional (right) plots six weeks after planting during the 1995 drought. The conventional corn is showing signs of water stress. Photo and caption: Rodale InstituteAnd why would organically managed soils contain more organic matter? It quite likely has to do with the ways conventional and organic farmers feed the soil.

If you’re a conventional farmer, you probably fertilize annually with synthetic nitrogen fertilizer in the form of anhydrous ammonia. This is isolated plant food, free of any organic matter. (It’s the equivalent of taking a vitamin pill—pure nutrients without actual food.) The only organic matter your soil gets comes from the crop residues that you leave in your field. This brings the advantage of convenience—crop nutrients come from tanks that can efficiently be sprayed on to fields. And it also gives crops a quick jot of ready-to-use nitrogen.

If you’re an organic farmer, you don’t have the luxury of blasting your soil with straight nitrogen. To replenish nutrients, you have to have physical stuff that contains nitrogen bound up in organic matter—think compost and manure. You can also grow legume cover crops that trap nitrogen from the air and deliver it to the roots of plants in a form that can be taken into the soil. In this case, too, you’re adding a nice dose of organic matter along with nitrogen, in the form of the plants that rot in the ground when the cover crops does. And, like conventional farmers, you get the benefit of crop residues left in the field.

As a result of these difference, organically managed soils trap more carbon in the soil—and all of that carbon allows these soils to hold in water and nutrients better. (Note that carbon stored in soil in a stable fashion is carbon that isn’t in the atmosphere trapping heat and causing the planet to warm. So organically managed soils don’t just help farmers adapt to climate change—they also help help mitigate climate change.) 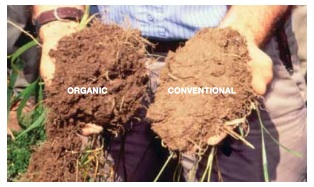 The organically managed soil is darker and aggregates are more visible compared to the conventional. Photo and caption: Rodale InstituteThe oldest US tests plots comparing organic and conventional farming, the Rodale Institute’s fields in Pennsylvania, bear this out. In the latest report on its side-by-side experiment, which started 1981, Rodale found that “Organic corn yields were 31% higher than conventional in years of drought.” Researchers theorize that this is because the organic fields continue storing more carbon year after year, while the conventional ones have “shown a loss in carbon in more recent years.” (Another long-term study, Iowa State University’s Long-Term Agroecological Research Experiment, found similar results.) Here’s how Rodale describes the role of carbon:

Carbon performs many crucial functions such as acting as a reservoir of plant nutrients, binding soil particles together, maintaining soil temperature, providing a food source for microbes, binding heavy metals and pesticides, influencing water-holding capacity and aeration, and more.

Now, this insight doesn’t mean that our food security depends on the farmers who manage the Midwest’s vast corn and soy fields converting to organic immediately, complete with USDA certification. But it does mean that these farmers have something important to learn from organic farming: that feeding the soil means much more than lashing it with isolated nitrogen. It also requires judicious use of manure, much more focus on compost, crop diversification (no more rotations of just corn and soy), and a new dedication to winter-season cover-cropping. Without diving into the wonky depths of agricultural economics, I can say for sure that none of this will happen without a serious nudge from US farm policy.

Here is my modest proposal, which will not make it into the once-in-five years farm bill now being debated in Congress, but may look attractive down the road as climate change proceeds apace: Stop using farm policy to prod farmers to grow as much corn, soy, and a few other commodities as possible, as is being done now and for the foreseeable future, and start subsidizing them based on how much carbon they store in their soil. As the Rodale results show, crop yields will take care of themselves as the Midwest’s soils gain organic matter.

In short, a climate-ready agriculture system will not likely arrive gift-wrapped in the form of a silver-bullet technology from the ag-biotech industry. Rather, if we achieve it, it will be because we figured out how to convince farmers en masse to use their land to sponge up carbon.