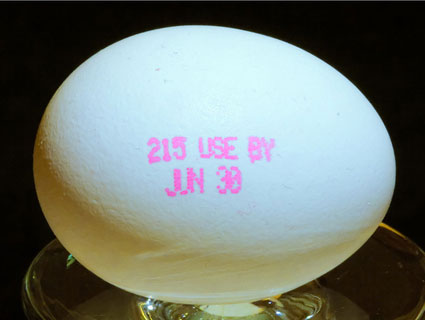 I am a recovering food-expiration-date zealot. Until very recently, I poured milk down the drain if it was even 24 hours past the date printed on the carton. Then, when I was trying to kick my restaurant habit and reduce my food waste and spending, I learned that the very expiration dates that I had so faithfully adhered to were mere suggestions. Even the FDA admits this: “‘Use-by’ dates usually refer to best quality and are not safety dates,” the agency says in its expiration-date FAQ. “But even if the date expires during home storage, a product should be safe, wholesome and of good quality if handled properly and kept at 40° F or below.” The only product that the FDA requires expiration dates for is infant formula.

Given all this, I’ve been looking for foods nearing their expiration dates at supermarkets: If I can save a yogurt from an early death, I reason, I’ll be cutting down on food waste at the supermarket. But I’ve noticed at my local stores that it’s close to impossible to find food that’s less than a week away from expiring.

So I reached out to the corporate HQ of several major supermarket chains. Of the five chains I contacted, only Whole Foods responded, assuring me, vaguely, that team members “are consistently reviewing products on our shelves, and removing anything that that has reached its expiration date.”

Frustrated, I decided to call the stores I shop at directly, using yogurt as a test case. How long before a container of yogurt expires, I asked, would it remain on the shelf? As a whole, employees seemed fairly foggy on store policy. “I think we keep it out up until the day it expires?” said a guy at Whole Foods. “Wait, no, that sounds kind of sketchy. I’d like to think we do better than that.” He connected me with an employee in the dairy department. “For the little ones we leave them on the shelf up until about three days before the expiration dates,” he said. “For the big ones usually we take it out of the shelf like five days before.” Some of the usable product gets donated to charity. A manager at Lucky told me he thought that employees left yogurt out until two or three days before its expiration date, then threw it away. Trader Joe’s did the same, though the employee I talked do said she thought that some items were donated.

Lastly, I had this conversation with a manager at my local Safeway:

Oof. Of course, the employees I talked to were only speaking about practices at their individual stores, not chainwide policies. But grocery store food waste is a well-documented problem. A 2006 study (PDF) found that the average supermarket sends close to 5,000 pounds of food per employee to the landfill every year.

So what’s a waste-hating consumer to do? For starters, find out if your supermarket donates near-expired goods to charity. You can also hunt for bargains. Some major supermarket chains have discount shelves and bins, and discount chains like Grocery Outlet sell food that’s nearing or just slightly past its prime. Once you get your goods home, treat expiration dates as guidelines. In most cases, you can use your eyes and nose: If something looks off-color or smells unappetizing, that’s a good sign that you shouldn’t eat it. You can also refer to this handy FDA chart.