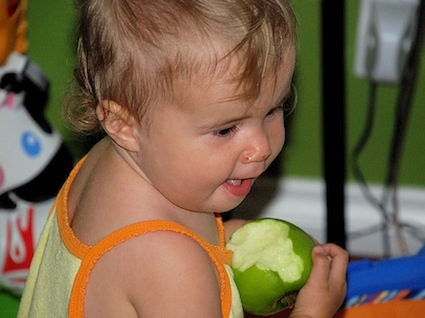 Every year, Environmental Working Group crunches pesticide-testing USDA data and comes up with its “Dirty Dozen” and “Clean Fifteen” lists of most- and least-contaminated fruits and vegetables.

This year’s model, released Tuesday, crowned the apple as the dirtiest produce, and onions as the cleanest. *The “dirty dozen” list is below; the “clean 15” is here.

I have to add the same lament as I did last year—while I find EWG’s “dirty dozen” effort to be extremely valuable for consumers on a budget deciding which produce to buy organic, I wish it would also add a third list tracking pesticide exposure for farm workers. While I do not discount the dangers of consuming small amounts of the cocktail of pesticides found on a typical grocery-store apple, it is the people who tend and harvest farm fields who bear the most risk.

Sometimes, crops that are heavily sprayed while growing end up with very little pesticide residues on the supermarket shelf. That’s great for consumers but awful for farm workers.

In an analysis of last year’s EWG lists, Pesticide Action Network’s Karl Tupper found that the two most pesticide-intensive crops in the field are sweet potatoes and mushrooms—which both made the Clean Fifteen list both this year and last. I can’t consider a crop “clean” that exposes farm workers to pesticides at high levels—and I’m sure many consumers would feel the same way if they had access to information.

All of that said, it’s well worth digging into the list a bit. Here are some key facts. What always gets me is the diversity of poisons being sprayed on our produce. Get this:

In a new wrinkle this year, EWG looked at which produce had the highest loads of the most toxic pesticides still on the market—organophosphates, which act as a neurotoxin. These nasty chemicals have been withdrawn from use by the EPA for most crops, but can still be used in some cases. EWG found them on green beans and leafy greens such as kale and collards. Here’s why that’s of concern:

[A] study led by Stephen Rauch of British Columbia’s Children’s Hospital and published earlier this year in the scientific journal Environmental Health Perspectives found decreases in baby birth weight and shorter pregnancy in 300 Ohio mothers who showed elevated organophosphate exposures during pregnancy. These pregnancies took place after organophosphates were restricted for most uses (Rauch 2012). The Rauch study indicates that organophosphate exposures must be further curtailed to protect children’s health.

Pears prepared as baby food showed significant and widespread contamination. Fully 92 percent of the pear samples tested positive for at least one pesticide residue. Some 26 percent of the samples were tainted with 5 or more pesticides. Disturbingly, the pesticide iprodione, which EPA has categorized as a probable human carcinogen, was detected on three baby food pear samples. Iprodione is not registered with EPA for use on pears.

It’s important to note that while the pesticide traces are found on produce and in baby food in small amounts, very little research has been done on the “synergistic effects” of exposure to several pesticides in small amounts—the fact that they may act differently in combination than they do alone. What does it mean to eat a celery stalk with traces of 13 pesticides, or to feed baby food to your infant laced at low levels with five? Our own EPA still regulates pesticide traces on an individual basis, disregarding possible synergistic effects. The European Commission is starting to take them more seriously.

From a report commissioned by the European Commission in 2009:

There is a consensus in the field of mixture toxicology that the customary chemical-bychemical approach to risk assessment might be too simplistic. It is in danger of underestimating the risk of chemicals to human health and to the environment.

Plus (may contain traces of organophosphate pesticides): Green beans and kale and other leafy greens.

Correction: The original version of this article incorrectly stated that asparagus topped the list of dirtiest produce.