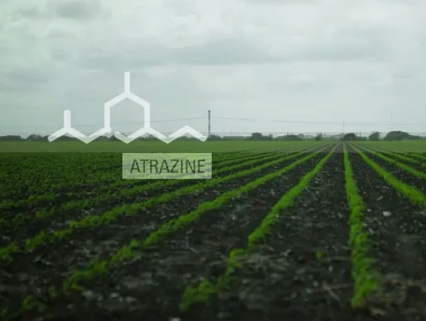 It’s all the rage these days for gigantic agrichemical companies to release creepy videos touting the benefits of dodgy products languishing under the regulatory microscope.

Yesterday, I posted Dow Agrosciences’ video on the wonders of its new genetically modified corn product, currently under review by the USDA for deregulation, that would have farmers dousing fields with a cocktail of herbicides.

And today, I point you to this even more elaborate and Orwellian one from Syngenta on its lucrative herbicide atrazine, currently under review by the EPA for its presence in drinking water. The video portrays atrazine as the best thing for water since the advent of the rain cloud. Just in case you miss the video’s point, Syngenta has made it easy for you with the title: “Saving the Oasis: Atrazine Saves Soil & Water.”

Now, the truth is that atrazine fouls water. The Natural Resources Defense Council’s analysis of Syngenta’s own EPA-mandated data shows that atrazine levels in both well and municipal drinking water in the Midwest frequently spike above the federal limit of three parts per billion. Recent independent testing by Pesticide Action Network found lower levels of the chemical, but still there was reason for concern: Average atrazine levels of “five times the legal limit of Europe (0.1 ppb), and ?ve times the the level associated with adverse health e?ects.”

To be clear, the legal limit in Europe was 0.1 parts per billion—until the European Union banned it altogether in 2003 based on safety concerns. Such tiny exposure levels matter because atrazine has emerged as a likely endocrine-disrupting chemical—meaning that it can cause reproductive and developmental trouble and increase cancer risk even in tiny doses.

The Syngenta video addresses this problem only obliquely—a voiceover intones that “over the past 50 years, atrazine has been the subject of some of the most rigorous and in-depth safety studies of any product used in agriculture.” The narrator does not comment on what those studies had to say. A meta-analysis of peer-reviewed research by University of Florida professors found damning evidence that atrazine causes sexual changes in frogs at low levels. The scientist who first prominently noted atrazine’s effect on frog, UC Berkeley biologist Tyrone Hayes, has been the subject of scathing attacks from Syngenta, a story recently chronicled in Mother Jones by Dashka Slater.

Of course, what affects frogs likely affects people, too. As for human health effects, the EPA has maintained its registration of atrazine largely based on Syngenta-funded research. Unfortunately, Syngenta-funded researchers have not always been the most reliable sources of info on the herbicide. Pesticide Action Network has a good summary of the independent research on atrazine’s health effects—and it’s not comforting reading, especially for people who live in areas with atrazine-spiked drinking water. Last year, an independent scientific panel convened by the EPA concluded that the agency had underplayed the risk of cancer posed by low levels of atrazine in drinking water.

Rather than address the science head on, the Syngenta video changes the subject and focuses on atrazine’s role in a particular style of no-till agriculture now prevalent in the Midwest. The practice, known in some circles as “chemical no-till,” simply involves farmers attacking weeds with herbicides instead of mechanically killing them with a tiller. The video makes great claims for chemical no-till as an environmental panacea. But those statements are wildly trumped up. To make its cases for chemical no-till, the video trots out Richard Fawcett, a consultant and retired professor at Iowa State University. According to a recent Center for Media and Democracy investigation, “Fawcett’s [consulting] firm has been paid at least $500,000 between 1995 and 2011 for his work that promotes atrazine.”

The only legitimate question the video raises is, why? That is, why would these gigantic transnational agrichemical companies go to to the trouble of producing nakedly propagandistic video—what minds do they hope to change, what do they hope to gain besides mockery? After all, the industry’s grip on political power seems as tight as ever. To me, the recent video surge looks like a rather desperate and ineffective lunge on the part of these firms to maintain what’s left of their credibility among the public. If you have any ideas, please put them in comments.

As you ponder those questions, check out yet another recent video, this one from industrial pork giant Smithfield extolling the virtues of industrial pork. It takes the same line as the Dow video I posted yesterday—let us keep doing exactly what we’re doing now, or the world is going to starve.