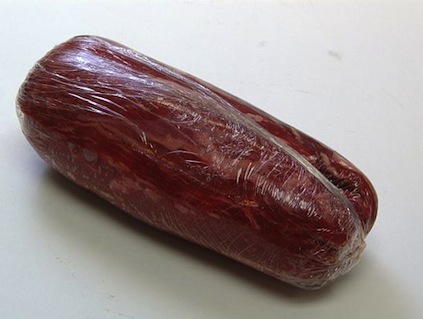 Three strips of beef that have been bound together with "meat glue" and rolled into a log, in preparation for being sliced into steak-like pieces. <a href="http://en.wikipedia.org/wiki/File:GluedBistroTenders.jpg">The Boathouse at Sunday Park</a>/Wikimedia Commons

Broadcast news and social-media sites have been aflame with reports about something called “meat glue.”

“If you were disturbed to hear about ‘pink slime’ in your burger, you’ll want to know about ‘meat glue,’ because a fat, rare-cooked filet mignon may not be what it seems,” ABC News’ Bay Area affiliate gasped last week.

First reaction: Ooh, gross. Reaction upon a bit of reflection: Meat glue, an enzyme known as transglutaminase, is indeed a trick up the meat industry’s sleeve, but a relatively minor one in the grand scheme.

A couple of weeks ago, I named four common industry practices that are “grosser than pink slime.” (Pink slime itself is pretty gross.) Here’s a fifth: Every year, dairy and beef cows are fed around 2 billion pounds of chicken litter—chicken shit, dead chickens, and leftover feeds, which contains cow protein. Cows being fed chicken shit is deeply gross; cows eating cow protein is downright scary.

But using transglutaminase to glue pieces of meat together? It can be a dodgy practice, but it doesn’t make the cut.

Transglutaminase is an enzyme, naturally found in blood, that can bind proteins together. Food scientists figured out how to synthesize it from bacteria, and a Japanese company called Ajinomoto markets it in the United States under the brand name Activa.

As far as I can tell, there are no health problems associated with consuming transglutaminase itself. Environmental Working Group’s “Skin Deep” cosmetics database lists it as an ingredient in six hair-care products and categorizes it as a “low hazard” substance.

The dodgy part lies in how the meat industry can put it to use. Meat purveyors can use it to bind together disparate scraps of meat that can be sliced into cuts that look shockingly like whole steaks—thus passing off cheap scraps as pricey cuts. The Ajinomoto site has an image, captioned “Sample Beef Application,” that illustrates how four thin strands of beef can be bound together into a piece resembling a fat beef tenderloin, which can then be sliced into cuts that look a whole lot like pristine filet mignons. 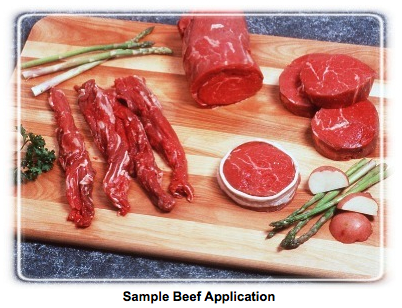 Beyond deception, there’s a food safety angle here, too. I’ve written a lot about how US meat is routinely tainted with pathogens, often strains that are resistant to antibiotics. These bacteria appear only on the surface of meat; so when you sear a real steak on both sides, you’re also killing those bacteria, even if the meat inside is cooked rare. (Ground meat, of course, is different—since surface area gets ground into the final product, you have to cook it all the way through to ensure that you’re not risking illness.)

But in a “steak” made up of several pieces bound by meat glue, surface meat (and any pathogens like salmonella clinging to it) ends up inside the final cut—so searing on both sides won’t do the trick. A rare real steak can be a pleasure to eat; rare meat-glued “steak” presents a potential health hazard.

Happily, the USDA’s meat inspection service decreed in 2001 that cuts that have been cobbled together with transglutaminase have to add a label indicating “that it has been formed from pieces of whole muscle meat, or that it has been reformed from a single cut.” Such a labeling requirement, while important, doesn’t warn consumers that the cuts should be cooked all the way through, though.

And anyway, such labels only inform consumers when they’re shopping at the supermarket. But according to ABC News’ reporting, consumers are more likely to encounter transglutaminase-bound cuts when eating outside the home.

Pinning down who is using transglutaminase isn’t easy. One meat company owner told KGO-TV that gluing meat is common practice, and the most glued product by far is filet mignon destined for the food service industry. An industry trade group also said meat glue is most often used where filet mignon is served in bulk—at a restaurant, banquet, cafeteria or hotel.

God forbid, if I ever find myself at some cursed banquet where they’re serving “filet mignon,” I’ll eat around the entree—whether or not it’s cooked to the leather stage to kill pathogens. But honestly, I’ll probably be thinking more about the cow’s awful life and deplorable diet than I am about the meat glue.

Now, the other way consumers might find themselves eating glued meat is at a very different kind of meal: at a high-end restaurant run by a creative chef. The standard bearer for such chefs in the United States, Wylie Dufresne of Manhattan’s WD-50, loves the stuff. According to Meat Paper, he has “concocted all manner of playful and bizarre food products with meat glue, including shrimp spaghetti, which he made by mixing salt, cayenne, deveined shrimp, and meat glue in a blender.”

Would I eat Dufresne’s famous “shrimp spaghetti” if confronted with a plate of it?

Honestly, yes. I trust chefs on Dufresne’s level to use top-quality raw materials and cook them properly—even if I can rarely afford to eat their food. I guess, in the end, it’s not the glue itself I find particularly gross; it’s when it’s used to bind together industrial meat that that it gets me.