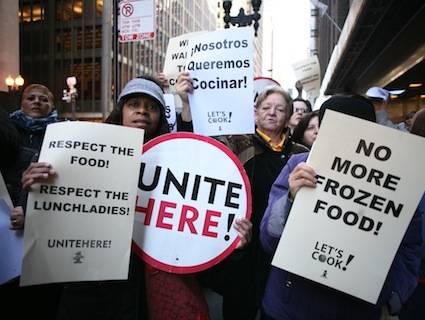 A couple of weeks ago, I wrote about how our public school lunch program has been systematically starved of both money and time—to the point that kids now get a median of 25 minutes, and often quite a bit less, to wolf down lunch.

If they’re lucky, the meal they’re being forced to inhale as quickly as possible will have been prepared by actual cooks working with fresh ingredients. More likely, though, they’re getting reheated prefab fare. Fewer than half US schools operate working kitchens, The New Yorker reported in 2006—and the Great Recession and the resulting pullback in public spending has only accelerated the trend toward school cafeterias as reheating centers for industrially made food. Last summer, for example, the city of Philadelphia shuttered 26 school kitchens in a budget-cutting move.

The city of Chicago, steered for years by privatization-happy Democrats Richard Daley and now Rahm Emanuel, has been heading down a similar path. Of the 11 new schools the city has built under a $1 billion program since 2006, 9 have no kitchen facilities and serve food based on what the Unite Here union, which organizes Chicago’s cafeteria workers, calls the “frozen food model.”

But the workers fought back—and the famously contentious Mayor Emanuel and his education team blinked. In their contract negotiations with the city, the workers won a five-year moratorium on building any new kitchenless schools or converting old ones over to the heat-and-serve model.

Now, in the grand scheme of American schools and the grim state of lunches, the union’s victory might seem like a relatively small one. But I think it’s significant. As the above-linked New Yorker article shows, the trend of dismantling school kitchens and replacing trained cooks with machines and unskilled workers dates to the Reagan area. The mechanization of the lunchroom has happened quietly, with very little backlash.

Chicago’s cafeteria workers pushed back, mounted a public campaign, mobilized concerned parents as their allies, took to the streets, and (at least for the next half-decade) established the principle that a properly staffed and equipped public cafeteria is a public good, something that all kids deserve, not just ones lucky enough to live in well-funded districts or attend private schools.

How much difference does it make to have real live cooks cooking in the cafeteria? Check out this Chicago Tribune story from last fall about a deal swung to get unprocessed, antibiotic-free chicken, raised in nearby Indiana, into Chicago schools. The two-thirds of Chicago schools that still have working cafeterias are managed by a private company called Chartwells-Thompson, which made the chicken deal. (The cafeteria workers are municipal employees managed by Chartwells). Here’s the Tribune:

“Two years ago I would have said that there is no way I’m ever bringing in raw chicken into our schools,” said Bob Bloomer, of Chartwells-Thompson, which caters the 473 CPS schools that will be serving the chicken.…”But we trained all the (CPS) cooks and managers before school started this past August to bring them up to speed on how to safely handle chicken from the time it comes into the back door to the time it’s served to students on the plate,” Bloomer said. “And we actually created a training DVD for ongoing education.”

What about the other one-third of schools, the ones without kitchens? They’re managed by a company called Preferred Meal Systems—and they didn’t get access to the local chicken, the Tribune reports, for the obvious reason that you can’t prepare raw chicken without stoves and cooks.

Anecdotally, at least, kids seem to like the fresh-cooked food better than the prefab. In its piece on the union’s deal with the city, the Chicago Sun-Times quotes a student who went from a school that reheats frozen food to one with real cooks:

“This food tastes a lot better.…At our old school we got food in a cardboard box,” said Andres Tejeda, 14. “I think cooking kitchens give more the feeling of home. The food tastes like it’s homemade.”

Preferred Meal Systems didn’t exactly draw raves in Boston, either, where it ran cafeterias until last year. According to the Boston Globe, the company lost its contract with the city of Boston after “opposition mounted from some students, parents, and fresh-food advocates dissatisfied with the quality of the school lunches.”

In addition to the moratorium, the Chicago workers also won themselves a raise—no mean feat when working against a union-hostile mayor in a time of fiscal hysteria. According to the Chicago Sun-Times, the workers now make an average of $12.50 per hour, and will receive 2 percent raises each of the next two years, which will bring the average wage up to $13. That doesn’t sound like much—the raises won’t keep up with the current rate of inflation—but at least it exceeds Chicago’s official “living wage” of $11.18. And by staving off the threat of shutting down cafeterias, the workers earned a measure of job security.

As I argued in my post on the Philadelphia cafeteria closings, the current trend of slashing funds for school kitchen facilities is a classic false economy—it saves money in the short term, but in the long run it reduces jobs and thus aggregate spending, ices out local food suppliers in favor of far-flung ones, and ultimately helps generations of kids develop a taste for industrial dreck.

“We did petitions to parents, we did house visits and phone banks to our coworkers, we did our ‘Let’s Cook!’ rally. And I think it was successful. I think it was a challenge to Chicago Public Schools to see the lunchroom staff standing up for good, quality food,” Rosie Diggs, a lunchroom attendant at a Chicago public school for eight years, told me via email.

They’re cooking up more than lunch in Chicago’s remaining cafeterias; those workers are also developing the recipe for a nationwide revolt against the destruction of the school kitchen.