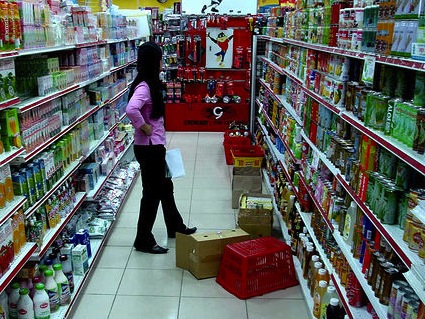 My colleague Kevin Drum has a good post rounding up recent research on the problem of food deserts—neighborhoods that lack access to large supermarkets and are instead served largely by corner stores.

Food deserts have come under scrutiny as a possible cause of obesity and other diet-related health problems in low-income neighborhoods. But as Kevin shows in his post, there’s no evidence that adding a supermarket to a neighborhood automatically changes people’s diets or improves their health outcomes.

I can’t say I’m surprised. If I don’t know how to swim, it’s highly unlikely that plunking a pool down in my neighborhood will suddenly have me doing laps. If I’m not accustomed to exercise, it’s highly doubtful that sudden access to a state-of-the-art gym is going to turn me into a fitness nut. Daily practices like eating form out of habit, and habits don’t change quickly or easily.

And the food industry has plenty of resources to encourage people to develop habits that engorge its bottom line at the expense of people’s health. In the latest numbers I’ve seen, from 2010, fast-food restaurants alone were spending $4.2 billion per year on marketing—much of it to children (an earlier study pegged the number at $1.6 billion). Fresh-vegetable interests simply can’t compete with that juggernaut.

Moreover, it isn’t as though supermarkets are emporiums of fresh, healthy food. True, a supermarket will offer more abundant and likely fresher produce than, say, a corner store. But produce sections are largely an afterthought—supermarkets mainly profit from selling aisles and aisles of boxed, pre-fab food. I can easily see how someone with a poor diet could switch from shopping at the corner to shopping at at big-box grocer without undergoing much of a diet change.

I agree with Kevin that if we want to improve the American diet, “we need to look elsewhere.” Efforts like Michelle Obama’s push to get Walmart and other big boxes into low-income areas are likely to benefit few but shareholders in those companies.

Where I propose we look first is to the National School Lunch Program, which remains drastically underfunded even after last year’s reauthorization. I stand by what I wrote two years ago:

School lunches are our society’s most concrete, tangible way of transmitting foodways to rising generations. Sure, we pass on foodways in home kitchens and in our built infrastructure of restaurants/eateries, and well as through advertising; but those are in the private sphere. The public-school cafeteria is where we create a public vision of what the food system should be like. In short, it’s the public contribution to the formation of kids’ eating habits. And the eating habits we develop as kids largely determine the food choices we make as adults. If that weren’t true, the food industry wouldn’t be dropping $1.6 billion every year marketing to kids.

…
What we’re doing in public-school cafeterias is helping brutalize the palates of today’s children. We’re helping mint literally millions of customers for a food industry that generates tremendous profit selling cheap, abysmal, and ecologically ruinous food. We are helping to shape the food system that we’ll have in 10 years and beyond: a food system that builds health within communities and ecosystems–or one that does the opposite.

But as I emphasized in that piece, transforming the cafeteria alone will not likely transform the food system. The food industry has built up tremendous cultural and economic momentum over decades; having seized control of school lunches is only one facet of its domination over our food culture. I suspect that community-organizing projects—like Brooklyn’s Added Value, Oakland’s People’s Grocery , Boston’s Food Project, and the many other bubbling up across the country—will also have to play a role.