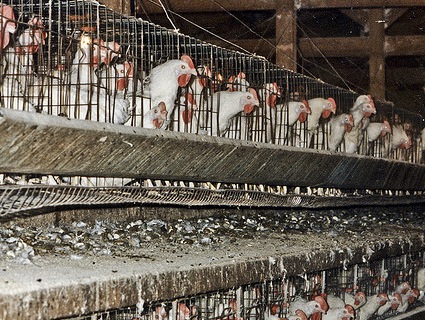 Will the FDA's new rules change this scenario? Not likely. <a href="http://www.flickr.com/photos/farmsanctuary1/2162614201/">Farm Sanctuary</a>/Flickr

A casual reader taking in my account and the New York Times’ account of yesterday’s big FDA antibiotics announcement might have thought we were reacting to different events. Here’s the Times lead:

Farmers and ranchers will for the first time need a prescription from a veterinarian before using antibiotics in farm animals, in hopes that more judicious use of the drugs will reduce the tens of thousands of human deaths that result each year from the drugs’ overuse.

In the Times’ reading, the FDA placed significant restrictions on antibiotics use. My take was more critical: “The plan contains a bull-size loophole—and is purely voluntary, to boot.”

What gives? In short, the Times delivered a skim-level, FDA-friendly account of the new plan. Let’s start with the loophole. Here’s the Times:

Michael Taylor, the F.D.A.’s deputy commissioner for food, predicted that the new restrictions would save lives because farmers would have to convince a veterinarian that their animals were either sick or at risk of getting a specific illness. [Emphasis added.]

The bolded part is the key. As I reported yesterday, the FDA plan intends to phase out the use of antibiotics as growth promoters, but allows them to continue to be used to “prevent” disease. That’s a major loophole—it means that farmers can continue stuffing animals together in filthy conditions and dosing them with antibiotics to keep them alive. Margaret Mellon, senior scientist at the Union of Concerned Scientists and a longtime watchdog of the meat industry’s antibiotic-gorging ways, put it like this in a Wednesday press release:

The outlined process appears to give the companies the opportunity to relabel drugs currently slated for growth promotion for disease prevention instead. Such relabeling could allow them to sell the exact same drugs in the very same amounts

None of this comes out in the Times story.

Then there’s the voluntary angle. The Times let’s the FDA’s Mike Taylor spin it:

Initially, the F.D.A. is asking drug makers to voluntarily change their labels to require a prescription; federal officials said that drug makers had largely agreed to the change. If some fail to impose the restrictions, the agency will consider a more forceful ban, Mr. Taylor said.

Sounds good, right? Mellon looks into the plan’s nuts and bolts, and find reason for skepticism:

Unfortunately, the process will also be secret. Companies will have three months to submit voluntary plans and three years to implement them. During this entire time, the public will be kept in the dark. It could be three to four years before anyone knows how well the program is working.

Now, it is true that the new FDA plan will likely change how antibiotics move from drug company to factory farm. The FDA wants the drug industry to require vets’ prescriptions for all human-relevant antibiotics issued to factory farms, and the Times is correct the industry seems willing to (eventually) comply. But because of the prevention loophole, there’s just no guarantee that the move will significantly reduce the meat industry’s voracious and reckless use of antibiotics.