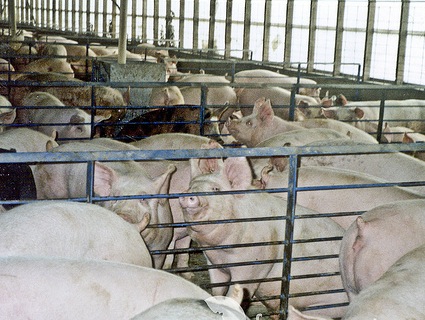 These not-so-little piggies get a daily dose of antibiotics. Will the FDA's new initiative change that? <a href="http://www.flickr.com/photos/farmsanctuary1/2163461196/sizes/m/in/photostream/">Farm Sanctuary</a>/Flickr

Without much warning and indeed just in time to catch me on a deadline for another story, the FDA finally got around to announcing its plan to address something it has seen as a public-health menace for 35 years: overuse of antibiotics on factory-scale animal farms.

Unfortunately, the plan contains a bull-size loophole—and is purely voluntary, to boot.

Before I get into the weak parts of the announcement, let me point to the positive. In its press release, the agency states bluntly why a change in policy is necessary:

Antimicrobial resistance occurs when bacteria or other microbes develop the ability to resist the effects of a drug. Once this occurs, a drug may no longer be as effective in treating various illnesses or infections. Because it is well established that all uses of antimicrobial drugs, in both humans and animals, contribute to the development of antimicrobial resistance, it is important to use these drugs only when medically necessary. [Emphasis added.]

Now, given that the FDA recently revealed that livestock operations consume 80 percent of antibiotics used in the United States (excluding industrial uses), that’s a strong statement. The meat industry denies that its drug habit contributes to antibiotic resistance in diseases that affect people. The FDA is now on record contradicting that.

Now to the plan itself. Here it is (also from the FDA’s press release):

Under this new voluntary initiative, certain antibiotics would not be used for so-called “production” purposes, such as to enhance growth or improve feed efficiency in an animal. These antibiotics would still be available to prevent, control or treat illnesses in food-producing animals under the supervision of a veterinarian.

Okay, let’s unpack some things here. Currently, antibiotics have three uses on factory livestock farms. The first is growth promotion. For reasons that are little understood, when animals get small daily doses of the the stuff, they grow faster. The second is disease prevention. When you stuff animals together in filthy conditions, they tend to get sick and pass diseases among themselves rapidly. So the industry likes to dose them regularly to keep them from getting sick. The third use is disease treatment—an animal comes down with a bug and gets treated with antibiotics.

So the FDA is stating its intention to phase out the first use and leave the other two intact. But preserving the second use, prevention, leaves a gaping loophole. First of all, how can anyone distinguish giving animals small daily doses of antibiotics to prevent disease from giving them small daily doses to promote growth? The industry can simply claim it’s using antibiotics preventively and go on about its business—continuing to reap the benefits of growth promotion and continuing to menace public health by breeding resistance.

Also, by preserving “disease prevention” as a legit use, the FDA allows the industry to keep on throwing pharmaceuticals at—instead of forcing it to clean up—filthy and cramped conditions that allow bacterial pathogens to thrive on factory farms.

Then there’s the voluntary part. I mean, uh, the program is voluntary. As in, optional. The vet-pharmaceutical industry exists to sell its products; the meat industry enjoys the antibiotic-soaked status quo. What’s the incentive to change?

Laura Rogers, director of the Pew Campaign on Human Health and Industrial Farming, took a relatively sanguine view of the move. “The FDA has said since early in the Obama administration that [it] would first try a voluntary approach, and then move to regulation if that doesn’t work,” she told me. “This is an important step.” But she stressed that with the “preventative” loophole in place, the plan is deeply flawed.

Other consumer groups that have worked to curtail farm antibiotics are even less impressed. In an emailed press release, Consumers Union argued that “the problem is urgent—we need much stronger, quicker action.” The Center for Science in the Public Interest declared the plan “tragically flawed.”

The FDA’s move comes less than three weeks after a federal judge ordered the agency to hold public hearings on two classes of antibiotics used both on farms and in your doctor’s office: tetracycline and penicillin. Responding to a lawsuit against the agency filed by the Natural Resources Defense Council, the judge placed the burden on the drug companies to prove that dosing farm animals with those drugs regularly was safe. If they couldn’t do so, the judge ruled, the FDA would have to ban them.

I called NRDC staff attorney Avinash Kar, who represents his group in that court case, to ask if the FDA’s Wednesday action was some kind of couched response to that court case. “It wasn’t responsive at all,” he said. “The FDA still has to hold those hearings, and the industry still has to prove its products are safe.” I asked him what he thought of the new plan. He was dismissive. “The FDA didn’t actually require the livestock industry to stop endangering human health,” he said.

UPDATE: Margaret Mellon, senior scientist at the Union of Concerned Scientists and a longtime watchdog of the meat industry’s antibiotic-gorging ways, has issued a stinging critique via press release. Here’s the gist:

We have no reason to believe that the veterinary pharmaceutical industry—which, to date, has rarely even acknowledged that antibiotic resistance is a serious public health issue—will cooperate with the agency on a plan that could reduce its profits.

The outlined process appears to give the companies the opportunity to relabel drugs currently slated for growth promotion for disease prevention instead. Such relabeling could allow them to sell the exact same drugs in the very same amounts. The process also allows companies to avoid risk assessments for new drug approvals.

Unfortunately, the process will also be secret. Companies will have three months to submit voluntary plans and three years to implement them. During this entire time, the public will be kept in the dark. It could be three to four years before anyone knows how well the program is working.

Ultimately, if antibiotic use is reduced only marginally or not at all much time and taxpayer dollars will have been wasted.

The agency doesn’t need to embark on this novel but very risky experiment in relying on companies to police their own products. It has—and should have relied upon—its authority under the Food, Drug and Cosmetic Act to cancel unsafe uses of drugs.