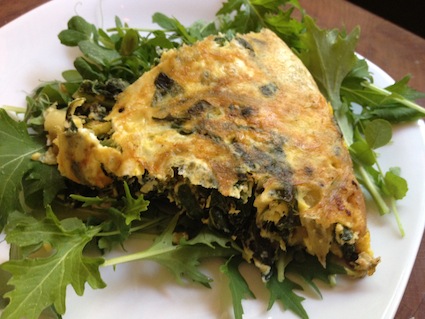 The frittata—an Italian-style open omelette—is surely one the easiest and most versatile ways to throw together a substantial and delicious meal. Therefore, it was inevitable that I’d eventually turn my attention to it for the Tom’s Kitchen column.

I learned to make frittatas at the knee of the great Italian cookbook writer Marcella Hazan. Not literally; I’ve never met her, and it’s a good thing, because if I ever did, I’d likely collapse into a puddle of incomprehensible gushing. But I’ve studied her immortal Essentials of Classic of Italian Cooking, and it was there, over the past two decades, that I picked up my frittata technique.

On a recent weekday, I found myself in need of lunch and with a larder consisting of some collards, some mature and spicy arugula that was a little too tough to be enjoyable when raw but wonderful wilted, plenty of fresh eggs, and the end of a block of Parmesano-Reggiano. I knew exactly what to do with it all, and after all these years, I didn’t even have to crack open my copy of Hazan.

Frittata with Greens, in the style of Hazan*
serves 3

4 tablespoons butter
1 medium-sized onion, sliced thinly
7 eggs, as fresh and free-range as you can get
½ cup Parmesano-Reggiano other other good grating cheese, such as grano padano, grated
1 bunch of greens appropriate for braising, such as collards, kale, or chard (I used collards and mature arugula), bunched together and sliced thin
Salt and freshly ground black pepper

Melt half of the butter in a cast-iron skillet over medium-low heat. When its foam has subsided, add the onions plus a pinch of salt and cook, stirring occasionally and taking care that they not char, until soft but not brown. Add the greens, stirring them to coat with the buttery onions. Add a splash of water, cover the skillet, turn heat to low, and let the greens cook until tender.

When the greens are ready, turn off heat, and remove the greens from the pan and wipe away any bits with a paper towel. Let the greens cool on a plate for a couple of minutes. Meanwhile, add the other 2 tablespoons of butter to the pan and turn heat to medium. Now add the greens, which will still be hot, to the beaten eggs and stir them in until just incorporated. The hot greens will cause the eggs to puff up and cook a little, but that’s okay. When the butter has melted, its foam has subsided, and the skillet is sizzling hot (you can test with a bit of the egg mixture), dump the eggs/greens mixture into the pan—there should be an audible sizzle—and immediately turn heat to low. Sprinkle the reserved tablespoon of cheese evenly over the surface. Now turn the broiler on in your oven, where the frittata will finish cooking, and set a rack about 8″ from the flame. 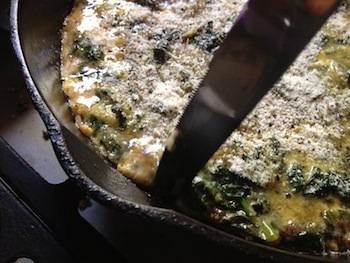 Making sure the edges are set—the sides should pull away from the pan easily. Let your frittata cook until the egg mixture set at the edges all around—run a butter knife around the edges to make sure (picture right).

Place the skillet on the rack under the oven’s hot broiler, and let it cook until lighly brown and fully set. It won’t take long.

Remove the skillet from the oven and place a cutting board over it—one that’s larger than the skillet itself. Carefully—using oven mits on both hands—press the skillet and rack together and invert them them, so that the frittata falls on the cutting board.

With good bread and a simple salad, you’ve got a hearty meal.

* You may note that this is the rare and perhaps only Tom’s Kitchen recipe that doesn’t include garlic. That’s because Maverick Farms executive director Hillary Wilson has issued an edict against garlic in egg dishes, claiming garlic makes eggs taste “fishy.”