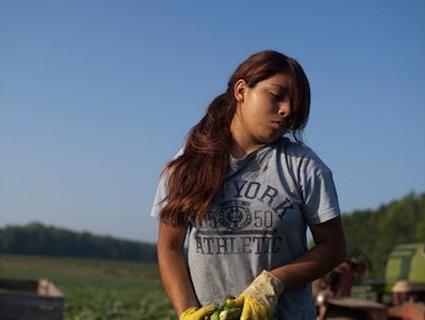 In the heart of Florida’s industrial-scale fruit and vegetable fields, the Coalition of Immokalee Workers has achieved the most tangible gains for US farmworkers since the glory days of the California-based United Farm Workers in the 1970s. CIW has methodically taken on large tomato growers and the giant corporations that buy their product, winning for themselves an extra penny for every pound of tomatoes they harvest, which amounts to a substantial raise; as well as code-of-conduct agreements between buyers and growers that set up a grievance process for alleged abuses and other protections.

But despite CIW’s burgeoning power, conditions remain rough in the area’s farm fields—especially on farms that haven’t signed the code of conduct. The group’s agreements so far only cover tomatoes; workers toiling in other crops remain underpaid and largely unprotected. And last week, the group reported Sunday, a worker from a nearby eggplant field walked into its office wearing a bloodied t-shirt. Here’s what happened:

He had been working at a vegetable packing house, packing eggplants, about 10 miles from Immokalee when a supervisor approached him. According to the worker, the supervisor criticized his work, and he, thinking the criticism unjustified, answered back. A discussion ensued when, according to the worker and a witness, the supervisor hauled off and punched him in the face. Staggered, he swung back, but was knocked to the ground by the supervisor before others in the area stepped in to pull them apart. The worker was told to go home, clean up, and return the next day. Instead, he went to the CIW’s office, and filed a police report. He then went to the hospital, where he learned that the supervisor’s punch had broken his nose.

For CIW, the incident was a haunting reminder of how things were in tomato fields in the mid-1990s, before the penny-per-pound campaign, when another young man walked into the offices wearing a bloody shirt:

He had been picking tomatoes in a field near Immokalee when he stopped to take a drink of water. A field supervisor accosted him, shouted “Are you here to work, or to drink water?”, and launched into him, leaving him badly bruised and bloodied—and determined to find justice. The young worker walked back to Immokalee, headed straight to the CIW office, and sparked a nighttime march of nearly 500 workers on the crew leader’s house. The marchers brandished his shirt as a banner, declaring “If you beat one of us, you beat us all!”, and helped launch a movement that changed Immokalee forever.

While I read CIW’s report, I thought about another place farmworkers are getting beat up: in the halls of the US Senate. Senators John Thune (R-S.D.) and Jerry Moran (R-Kansas) have introduced what they call “common sense” legislation designed to squash new rules proposed by Labor Secretary Hilda Solis that impose new restrictions on employing children on farms. The  proposed rules would prevent kids under 16 from handling pesticides, working in animal feedlots, among other things that most people wouldn’t want their kids doing.

The lawmakers claim that they are merely defending the right rights of family farmers to raise their kids as they please. “This is another example of the Obama administration initiating unsolicited regulations that would prohibit normal practices that have been carried out in rural areas for generations—not to mention limiting a desperately needed workforce to replace the current generation of farmers whose average age is nearing 60 years old,” Thune said in a press release.

That’s hogwash. The new rules would preserve the so-called “parental exception” that allows farm owners to put their kids to work at any age, in any job, “even hazardous work,” the Labor Department web site states. Rather than an attack on family farms, “The proposed rules represent long-overdue protections for children working for hire in farm communities,” Reid Maki of the Child Labor Coalition told Human Rights Watch. Hundreds of thousands of kids nationwide work with their families as migrant farmworkers, Human Rights Watch reports. The kids who pick our crops are routinely exposed to toxic pesticides, their fatality rate is four times that of other working youth, and they are four times more likely to drop out than the average American kid—overall, HRW reports, just a third of farmworker kids finish high school.

But farmworker kids need more than new work restrictions. As U. Roberto Romano ‘s recent documentary The Harvest/La Cosecha—which I reviewed here—demonstrates, the fundamental problem is low wages. None of the families depicted in the film would subject their kids to lives of field labor if they weren’t desperate for money.

And that brings us back to Immokalee, Florida. In addition to fighting the absurd Thune/Moran legislation and defending the proposed labor-department rules, people who don’t want to eat food picked by kids sacrificing their educations should also support the fight for higher wages. The penny per pound won by the CIW lifted annual wages for workers in the area from $10,000 to $12,000 to about $17,000, The New York Times reported.

That’s an amazing victory, but it also shows how rotten things have gotten for US farmworkers. In his superb new book Trampling Out the Vintage: Cesar Chavez and the Two Souls of the United Farm Workers, Frank Bardacke reports that by the 1970s, UFW organizing had gotten so strong that wages on some highly skilled farmworker crews earned $12 per hour—”more than 48 dollar in today’s money.” Bardacke adds: “Even the lowest-paid field workers in the late 1970s made more than one and a half times the minimum wage.”

Today, even the best-organized farmworkers in the county make just $17,000—or just slightly more than a worker employed all year at the current minimum wage of $7.25.