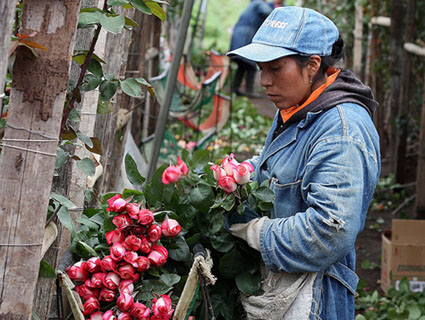 Valentine’s Day skeptics are as prevalent as the holiday’s loyalists: For every rose-toting lover, there’s a cupid defector who most definitely does not want anything red, pink, or pastel-colored. After digging into the background behind the Valentine’s Day industry, I’m pretty convinced that my own wry holiday spirit is merited—if not for this day’s sky-high levels of consumption (expected to reach $17.6 billion this year) then, at the very least, for its environmental damage and poor labor practices. Below, a breakdown of the Valentine’s Day trifecta: flowers, chocolate, and greeting cards. The results aren’t pretty. So you can curse us for tainting your holiday—or thank us for enabling your cynicism.

Cut flowers: That bouquet you may be planning to gift today was most likely not grown in the United States. The floriculture industry taps out at $32.8 billion, and about $14 billion of that comes from the sale of fresh flowers. Around 63 percent of those blooms are imports from Colombia, and another 23 percent from Ecuador. *

The labor rights facts of this industry are truly depressing. In 2005, the International Labor Rights Forum found that 55 percent of women working in the Ecuadorian flower production trade (they constitute half the flower workforce) had been victim to sexual harassment in the workplace. Nineteen percent were forced to have sex with a supervisor or coworker. Compulsory pregnancy testing is also a serious industry issue. In Colombia, where women make up about 65 percent of flower workers, a survey conducted by the nation’s flower industry union, Untraflores, found that about 80 percent of companies required women to take a pregnancy test as part of their job application process—presumably because they’d like to avoid providing paid maternity leave (required in Colombia). Another problem: In 2000, upwards of 48,000 children were found working in Ecuador’s flower industry. Colombia wasn’t much better. There have since been a number of hefty efforts at reform, and while Colombia’s been improving, the US Department of Labor still confirms extensive child labor use in Ecuador.

The environmental picture is similarly bleak. Many growers in both countries have been accused of using high levels of toxic pesticides, fungicides, and fumigants to grow big, bug-free roses. These can pollute water sources and neighboring land—one insecticide used in Ecuadorian rose-growing, fenamiphos, for example, has been phased out of US use because of its high toxicity to a number of species.

Pesticides also affect flower workers. As Mother Jones has reported before, workers exposed to the many toxic pesticides used in flower-production experience major health problems—from blurred vision to abdominal pain and birth defects or other reproductive risks. And while there’s little conclusive data on how much these pesticides can affect the eventual rose-owner, we do know that since roses aren’t an edible import, their pesticide residues aren’t regulated.

But you can still give guilt-free flowers to your sweetheart. VeriFlora is an eco-certification program that evaluates flower industry players for fair labor practices and sustainability efforts. Its “sustainably-grown” certified flowers are widely available at local florists and grocery stores.

Chocolate: As my colleague Jaeah Lee reported on another candy-heavy holiday—Halloween—most of the bon-bons that will be lovingly gifted and consumed this Valentines day come from West Africa, where child labor is rife, with over 500,000 children employed on cocoa farms in the Ivory Coast and Ghana alone.

The demands of the western world on the West African cocoa industry also contribute to biodiversity damage in the region. Ghana and the Ivory Coast produce almost 70 percent of the world’s cocoa. They’re also both located in the Upper Guinean forests, a tropical “biodiversity hotspot” which is home to more than half of the mammalian species in Africa, including several endangered ones. To meet growing industry demands, farmers have been expanding their cocoa farming by clearing forest territory, fragmenting coveted land in a way that disturbs the natural interactions of species and threatens their ultimate survival.

For ethical chocolate options, Shop to Stop Slavery has a nice list, as does the Rainforest Alliance—which has granted sustainability certification to a number of chocolate brands, most of which can be found at your local grocery store.

Greeting Cards: According to the EPA, the United States, with just 5 percent of the world’s population, consumes 33 percent of its paper. The virgin-timber-based pulp and paper industry is also the largest consumer of fresh water in OECD countries and their largest water polluter, says Darby Hoover, senior resource specialist at the Natural Resources Defense Council. Ink presents another eco stumbling block: Many greeting cards are printed with petroleum-based inks, which emit volatile organic compounds (VOCs) into the atmosphere. VOCs contribute to the development of ground level ozone, which is a main component of smog.

Greeting card companies have been making an effort to green the industry. Hallmark’s website notes that about 85 percent of the cards they sell in North America are produced on at least 20 percent recycled paper, which they clearly note on the back. Some companies have been switching over to soy-based inks, but Hoover says that even these aren’t “a slam-dunk” environmentally—they can contain other toxic ingredients, and are still a niche market. For greener cards, check out Conservatree’s handy guide, which breaks down cards by occasion, company, and environmental attributes.

So whoever your Valentine may be, it might be worth trying one of the eco-friendly spins on holiday tradition listed above. Or, go with something zanier by donating to a cause in your Valentine’s name (complete with free e-card), or crafting a card out of used materials with meaning, like an old magazine you both enjoyed, ticket stubs from a date, or the frayed takeout menu tacked to your fridge. The recipient just might be impressed with your creativity—not to mention your social conscience.

Correction: The original version of this article stated that 63 percent of US cut flowers come from Colombia, and another 23 percent from Ecuador. Those percentages apply only to imported flowers, which according to the Society of American Florists make up between 85 and 98 percent of the most common US flowers. Thanks to commenter Max Fisher for noticing something was off.