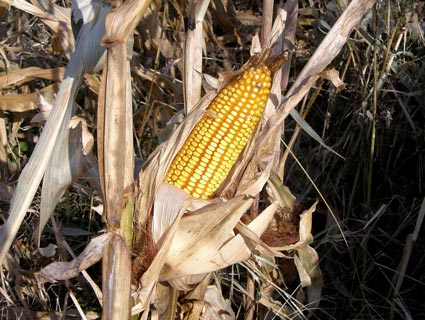 You’ve got to keep an eye on US regulatory agencies in the second half of December. That’s when watchdog journalists like me tend to take time off—and regulators like to sneak gifts to the industries they’re supposed to be regulating. This year, I was alert enough to detect this gift from the FDA to the meat industry; but the USDA caught me napping. The agency made two momentous announcements on GMO crops, neither of which got much media scrutiny. It deregulated Monsanto’s so-called drought-tolerant corn, and it prepared to deregulate Dow’s corn engineered to withstand the herbicides 2,4-D and dicamba. More on the later this week.

The drought-tolerant corn decision, which came down on Dec. 21, was momentous occasion, because it marked the first deregulation of a GMO crop with a “complex” trait. What I mean by that is, the other GMOs on the market have simple, one-gene traits: a gene that confers resistance to a particular herbicide, like Monsanto’s Roundup Ready seed or a gene that expresses the toxic-to-bugs properties of the bacteria Bt, as in Monsanto’s Bt seed. But a plant’s use of water is a complex process involving several genes; there’s no single “drought tolerant” gene. Generating such traits in plants that succeed in field conditions has been considerably more tricky for the agrichemical giants than than simple traits.

And indeed, Monsanto has staked huge PR capital on its ability to do just that. In a famous 2008 press release, the company declared it would “double yield in its three core crops of corn, soybeans and cotton by 2030, compared to a base year of  2000,” using patented seeds that will simultaneously “reduce by one-third the amount of key resources required to grow crops.” It placed complex traits like drought tolerance at the center of its effort,  promising seeds that would “result in more production per unit of land, and reduced use of energy, fertilizer and water per unit produced.”

The drought-tolerant corn the USDA signed off on in December is the first approved crop of that kind. The trouble is, it doesn’t work very well. The USDA acknowledged as much in its Nov. 11 Final Environmental Assessment of the crop. It makes clear that the product’s “drought tolerance” extends only to “moderate” drought conditions, and it has the same “minimum water requirements” as conventional corn.

And then it drops this bombshell, citing Monsanto’s own field tests: “It is prudent to acknowledge that the reduced yield-loss phenotype of MON 87360 does not exceed the natural variation observed in regionally-adapted varieties of conventional corn (representing different genetic backgrounds).” Translation: In areas of the US corn belt where drought is a factor, conventional breeders have already developed varieties that do just as well under moderate-drought conditions as Monsanto’s genetically altered product.

It added that these non-GMO varieties are “readily available,” and will remain so once Monsanto’s product is sold commercially. There are two things to say about this. The first is, it means that Monsanto’s novel product offers precisely nothing to farmers that isn’t already available to them—and without the need to pay a hefty GMO licensing fee. The second thing that comes to mind is that Monsanto’s dominance of the corn seed and trait market could mean that those “readily available” conventional varieties might not be readily available for very long once the company starts distributing its new seed. Already, there are areas in the corn belt in which farmers say they can’t buy non-Bt corn. Could Monsanto do the same thing with its drought-tolerant corn?

Doug Gurian-Sherman, a senior scientist with the Union of Concerned Scientists’ Food and Environment Program who has a paper forthcoming on the industry’s vexed efforts to make breakthroughs in drought tolerance, told me that it was “very possible” that Monsanto could use its market muscle to push big commodity farmers in the corn belt to use the company’s unnecessary product. “They could even use it as a loss leader, sell it at cost or even a loss, and then reap the PR benefits of a having a drought-tolerant product used on millions of acres.”

So even though Monsanto’s first complex-trait product is essentially a failure, it could still manage to ram it down farmers throats, and then be able to boast that it has its first super-seed out in the field. Meanwhile, the fact remains that the agrichemical industry still hasn’t produced a complex-trait product that works any better than conventional breeding.

And it’s not clear that the industry will ever succeed on this front, except in PR terms. Take another complex trait the industry has been promising for years: making plants more efficient in their use of nitrogen fertilizer. Stanford biologist Peter Vitousek put it to me like this in an interview for an article two years ago: “Plants have been evolving for millions of years. I doubt that [GMO] plant breeders will be able to hit upon anything for nutrient utilization that nature already hasn’t tried.” In 2009, Gurian-Sherman published a paper showing that the industry had yet to generate a successful nitrogen-efficient crop after a decade of research, even as traditional plant breeders had continued to make gains. More than two years later, Gurian-Sherman’s analysis still holds.