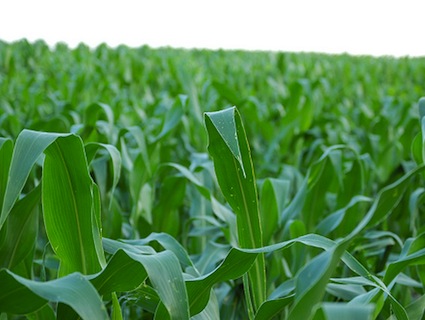 Expect to see lots of this stuff blanketing the Midwest for a long time if Monsanto and Dow get their way. <a href="http://www.flickr.com/photos/planmygreen/2675568751/">Rastoney</a>/Flickr

During the late December media lull, the USDA didn’t satisfy itself with green-lighting Monsanto’s useless, PR-centric “drought-tolerant” corn. It also prepped the way for approving a product from Monsanto’s rival Dow Agrosciences—one that industrial-scale corn farmers will likely find all too useful.

Dow has engineered a corn strain that withstands lashings of its herbicide, 2,4-D. The company’s pitch to farmers is simple: Your fields are becoming choked with weeds that have developed resistance to Monsanto’s Roundup herbicide. As soon as the USDA okays our product, all your problems will be solved.

At risk of sounding overly dramatic, the product seems to me to bring mainstream US agriculture to a crossroads. If Dow’s new corn makes it past the USDA and into farm fields, it will mark the beginning of at least another decade of ramped-up chemical-intensive farming of a few chosen crops (corn, soy, cotton), beholden to a handful of large agrichemical firms working in cahoots to sell ever larger quantities of poisons, environment be damned. If it and other new herbicide-tolerant crops can somehow be stopped, farming in the US heartland can be pushed toward a model based on biodiversity over monocropping, farmer skill in place of brute chemicals, and healthy food instead of industrial commodities.

Yet Dow’s pitch will likely prove quite compelling. Introduced in 1996, Roundup Ready crops now account for 94 percent of the soybean crops and upwards of 70 percent for soy and cotton, USDA figures show. The technology cut a huge chunk of work out of farming, allowing farmers to cultivate ever more massive swathes of land with less labor. 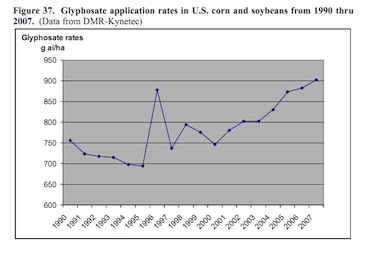 When Roundup Ready crops hit the market in the mid-1990s, farmers started applying more and more Roundup per acre.: From Mortensen, at al, “Navigating a Critical Juncture for Sustainable Weed Management,” BioScience, Jan. 2012But by the time farmers had structured their operations around Roundup Ready and its promise of effortless weed control, the technology had begun to fail. In what was surely one of the most predictable events in the history of agriculture, it turned out than when farmers douse millions of acres of land with a single herbicide year after year, weeds evolve to resist that poison. Last summer, Roundup-resistant superweeds flourished in huge swathes of US farmland, forcing farmers to apply gushers of toxic herbicide cocktails and even resort to hand-weeding—not a fun thing to do on a huge farm. A recent article in the industrial-ag trade journal Delta Farm Press summed up the situation: “Days of Easy Weed Control Are Over.”

Dow’s new herbicide-resistant product promises to bring those days back. In its petition to the USDA to approve 2,4-D-resistant corn, the company explicitly pitched it as the answer to farmers’ Roundup trouble. The 2,4-D trait will be “stacked” with Monsanto’s Roundup trait to “generate commercial hybrids with multiple herbicide tolerances,” the petition states. Note that the new product marks a point of collusion, not competition, between industry titans Dow and Monsanto—they plan to license the 2,4-D and Roundup traits to each other to form “stacked” hybrids.

And once they do, farmers can douse their fields with both 2,4-D and Roundup—and 2,4-D will kill whatever weeds Roundup can’t, and leave the crop pristine. Farmers’ growers will be able to “proactively manage weed populations while avoiding adverse population shifts of troublesome weeds or the development of resistance, particularly glyphosate- [Roundup-] resistance in weeds,” the petition promises.

The USDA, for its part, is buying what Dow is selling. Its Draft Environmental Assessment (PDF) offers no critique of Dow’s claims, and recommends that the product be deregulated. The agency is currently seeking public comment on the matter; the comment period ends February 27. Doug Gurian-Sherman, a senior scientist with the Union of Concerned Scientists, told me that when the USDA brings a GMO product to the comment stage after having recommended deregulation, it “almost always” green-lights the product. “The only times I’ve seen the USDA hold off at this stage is when there’s a lot of public pushback,” Gurian-Sherman says.

Dow’s new GM corn merits just such a public uproar, it seems to me. A just-released paper from a group of researchers led by Pennsylvania State University crop scientist David A. Mortensen makes a strong case that new herbicide-tolerant crops will lead US agriculture down a path of ever-increasing addiction to agrichemicals. (The abstract is here; I have a PDF of the full paper but can’t upload it because it’s under copyright.)

The authors note that even by Dow and Monsanto’s reckoning, a new stacked 2,4-D/Roundup-resistant product would immediately lead to an increase in herbicide use, because the companies have been advocating an herbicide program that combines current rates of Roundup use with a roughly equal amounts of 2,4-D. That’s good for sales, but not so good for the environment.

And wouldn’t such an herbicide cocktail just lead to weeds that defy both 2,4-D and Roundup? No need to worry about that; Dow and Monsanto claim that it’s extremely unlikely for weeds to survive two different herbicides that attack them simultaneously in entirely different ways. 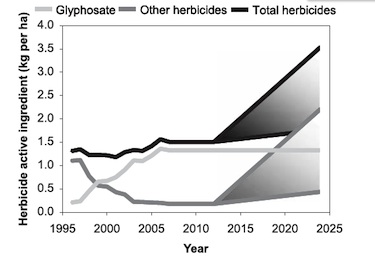 The authors predict that glyphosate (Roundup) use will hold steady at high levels—and use of other herbicides, like 2,4-D, will soar.: From Mortensen, at al, “Navigating a Critical Juncture for Sustainable Weed Management,” BioScience, Jan. 2012All in all, the authors conclude, chances are “actually quite high” that Dow’s new product will unleash a new generation of superweeds that resist both Roundup and 2,4-D. If 2,4-D resistance does indeed emerge, farmers will likely respond just as they responded to the advent of Roundup resistance—by applying ever higher doses.

Thus the authors project that 2,4-D use will surge decades after the new seeds reach market (see chart, left). Their main ecological concern with an explosion in 2,4-D use is pesticide drift: They say the compound is quite volatile and prone to be carried in air, where it can do damage to non-target plants like the neighbor’s vegetable farm. “Landscapes dominated by synthetic auxin- [2,4-D]–resistant [crops] may make it challenging to cultivate tomatoes, grapes, potatoes, and other horticultural crops without the threat of yield loss from drift,” they write. They also fear that if you’re a farmer determined not to use a stacked 2,4-D/Roundup seed, you could be forced to if your neighbor’s 2,4-D spray keeps knocking down your corn.

As for its toxicity to people and animals, the study’s authors take at face value the EPA’s assessment that 2,4-D and other chemicals in its class have “low acute and chronic toxicities to mammalian, bird, and fish model organisms; degrade fairly rapidly in the soil; and are not known to bioaccumulate.”

However, as I’ve reported before, the advocacy group Beyond Pesticides points to both epidemiological and lab-based evidence linking it non-Hodgkin’s lymphoma and other cancers. It’s also an endocrine disruptor, Beyond Pesticides reports, meaning it can “interfere with the body’s hormone messaging system and can alter many essential processes.” And in 2004, a coalition of more than a dozen environmental and social justice groups, including the Natural Resources Defense Council and Pesticide Action Network, wrote a letter to the EPA rebuking it for underestimating the health risks of 2,4-D—in particular, its carcinogenicity. The EPA, it goes without saying, brushed those concerns aside.

The frustrating part is, there no reason to send a flood of this stuff onto US farm fields, where it will likely run off into ground water, as both Roundup and Syngenta’s toxic herbicide atrazine already has.

As the authors of the Bioscience paper show, a simple program called Integrated Weed Management could rescue US farm fields from Roundup-resistant superweeds without recourse to more herbicides. The approach relies on low-tech techniques like crop rotation, cover crops, tillage, and targeted herbicide applications. IWM would mean bringing skill and thought back to farming, and it would push farmers into planting more crops than just corn and soy.

The biggest obstacle to IWM over the Dow/Monsanto vision doesn’t lie in efficiency or economics. The authors cite research showing that “cropping systems that employ an IWM approach can produce competitive yields and realize profit margins that are comparable to, if not greater than, those of systems that rely chiefly on herbicides.”

Rather, the obstacle lies in political economy: the power of the agrichemical companies to set the research agenda both in public universities and at the USDA, and to use farm supports to reward farmers for growing a narrow set of crops. Farmers have been using Roundup technology for nearly a generation; they will grope for the next fix to it until our public ag-research complex shows that them there’s a better, cheaper way.

And here’s where we get to the crossroads in our agriculture. If the agrichemical companies manage to ram through the regulatory process a bunch of patches to Roundup Ready farming, then their herbicide-drenched vision will continue dominating huge swathes of prime farmland throughout the country for the foreseeable future. We don’t have to go that way. It’s time to raise hell.

In the graphic below, Penn State ag-scientist David Mortensen and his co-authors lay out what they see as the crossroads facing US agriculture. 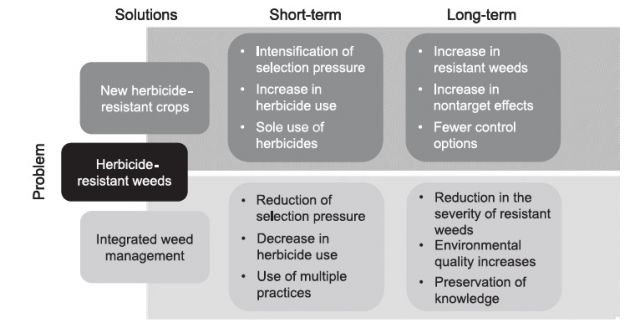 Fork in the road. From Mortensen, at al, “Navigating a Critical Juncture for Sustainable Weed Management,” BioScience, Jan. 2012