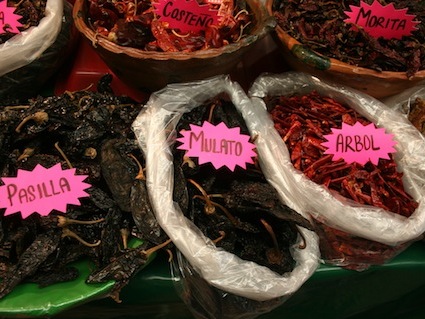 I grew up in the northern reaches of the original Mexican territory (now known as Texas). This accident of geography exposed me at a tender age to chili peppers. I’ve never recovered, and my chili obsession only deepened when I lived in Mexico City for two years in the late 1990s.

After years of immersion in other culinary traditions—Italian, French, etc.—I’m now capable of not lashing everything with tear-jerking quantities of chilis. And in fact, in actual Mexican food, people use chilis with great subtlety—there are condiments that are wickedly hot, but in most dishes, chilis offer a low-key, back-of-the-mouth burn, not a punch in the mouth.

I still love chilis, and use them pretty much every chance I get. They are a magical ingredient—bright-flavored and fiery when fresh; deep, rich, and often smoky (while retaining the fire) in dried form. Mexico City’s neighborhood markets are each a kind of dried-chili Mecca, featuring several stalls that specialize in a variety of these dark-colored treasures. 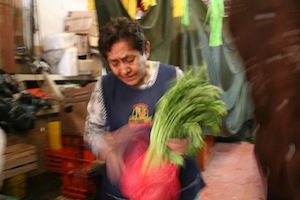 A vendor sells me celery for the brothOn a recent trip to that wondrous city (hectic, scary, glorious all at once), some friends and I met at Mercado Lazaro Cardenas  in the city’s Del Valle neighborhood to shop for dinner and have a coffee at a fantastic small-batch roaster called Café Passmar that randomly resides in the middle of the market. Except for the fancy coffee, Mercado Lazaro Cardenas is really just another neighborhood market in a city that’s still teeming with them, despite the advent of corporate supermarkets. That is to say, it’s a pretty spectacular place, packed with stalls featuring all manner of fruit and vegetables and meat. We picked up a bunch of chilis, some tortillas—and stuff for way more side dishes than usually go into a Tom’s Kitchen column (fresh fava beans, huitlacoche (corn fungus), little red potatoes, wild mushrooms, and chard).

For pork, I confess that I forsook the mercado for one of those supermarkets. I did so because Mexico’s pork production has dramaticaly industrialized over the past decade and a half—as chronicled in this excellent Nation article by David Bacon on the topic—and I no longer can be sure that even independent meat purveyors aren’t hawking Smithfield dreck. So We took a detour on the way home to a fancy supermarket called City Market—in English, no less—and got pork ribs labeled “natural.” Whether that label actually means anything will require more investigation.

Fortified with some terrific mescal, we did the following to the pork. Warning: Cocina de Tom is a bit more involved than Tom’s Kitchen; but it’s easy!

For sauce
A mix of 12 medium-sized dried chilis, such as guajillos, pasillas, and anchos, split open and stemmed and seeded
2 corn tortillas
6 tomatillos, husked
4 cloves garlic 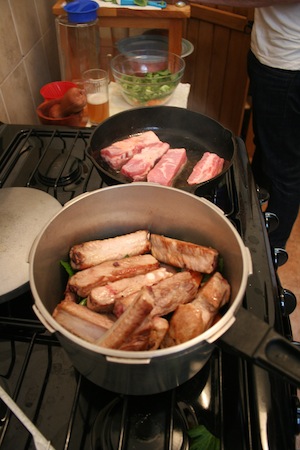 Pork ribs browning, waiting to be braised. : Brian JonesIn a heavy-bottomed frying pan, add just enough oil to cover the bottom of the pan and turn heat to medium. Using paper towels, or preferably a kitchen towel that will be quickly dropped into the wash, tamp dry the ribs on all sides. (This is key: Wet ribs won’t brown.)

Season the ribs on all sides with salt and pepper and add to hot pan, bone side up. Brown the ribs on as many sides as you can. If the pan begins to scorch, turn the heat down. When the ribs are well browned, remove them and set them aside, and turn heat to low. (You may have to do this in batches). Add a cup or so of water to deglaze the pan, which means scraping the pan with a wooden spoon to liberate the flavorful browned bits that accumulated there. Turn off heat.

Now arrange the sliced onion, the garlic, the bay leaf, the carrot and celery chunks, and the chipotle at the bottm of a Dutch oven-style pot (heavy) pot with a tight-fitting lid, and lay the ribs over the. Add the deglazing water from the frying pan, and add enough extra water to submerge the a little more than ribs halfway. Bring slowly to a simmer, cover, and turn heat to lowest setting. (You can also place the covered pot in an oven pre-heated to 300 degrees.)

Let the ribs simmer for about 3 hours, then check. The meat should be fork tender and falling off the bone. (If it’s not, allow more time.)

When the meat is done, turn the heat off and remove the ribs and any meat that has fallen off, setting them aside. (If making the dish a day ahead, wrap in foil and store in fridge overnight. If you’re making it for same-day eating, you can leave them out on a plate, covered with foil.) Pour the hot liquid through a fine strainer, straining out onions, etc., into a large measuring cup or bowl. Allow to cool in the fridge for at least an hour. This will allow the fat to rise to the top and harden, so it can easily get taken out. Defatting the stock in this way will lead to a clearer-tasting, more vivid sauce.

Meanwhile, while the ribs are simmering, make the pickled-onion garnish. Slice the red onion thin and place the slices in a bowl. Pour boiling water over the onions until covered, and let them sit in it for a minute or two. Drain the water and return blanched onion slices to the bowl. add a pinch of salt, a grind of pepper, and a crushed and peeled clove of garlic. Add vinegar until onion slices are covered, and set aside. 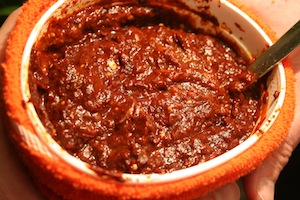 Chili paste! Brian JonesNow make the sauce. Place foil at the bottom of a large cast-iron or other heavy skillet and place over medium heat. Toast the garlic gloves and tomatillos, turning occasionally, until the garlic has softened and turned black in spots and the tomatillos have blackened a bit and started to split open. Remove the foil from the pan, being careful not to spill the tomatillo juices. Peel the toasted garlic and drop it into a blender or food processor. Dump  the tomatillos, juice and all, into the blender with the garlic. Set aside. Now toast the tortillas in the same skillet, until they’ve blackened a bit and gotten dried out. Tear one in half and add it to the blender. Set the other aside.

Toast the chilis on the same skillet, maintaining medium heat. Open them flat and press them into the skillet with a tongs, a few at a time, a few seconds each side. Lay them into a bowl and and submerge with hot water for at least 15 minutes. Add the rehydrated chilis—discarding the water—to the blender with the garlic, tomatillos, and tortillas. Give it a heavy pich of salt and a lashing of ground pepper, and blend until smooth. You will probably have to scrape the sides of the blender down with a spatula. If the mixture is too dry to blend, add a little water. If it’s to loose and saucy, add a chunk of the reserved tortilla. What you should end up with is a thick and smooth paste. 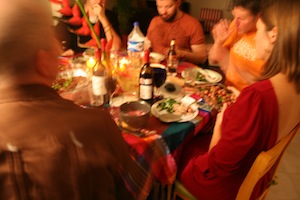 And now, for the moment we’ve all been waiting for…: Rachel SalamanNow you’ve got a chili paste, ribs that are falling off the bone, and a rich broth. It’s time to bring them all together. Add about the paste to a large pot, and stir in enough broth to make it nice and saucy—not to thick, not too thin. Add the ribs and any meat that has fallen off. Cover, and let the sauce come slowly to a simmer over medium-low heat. When the ribs are heated through, spread all the meat and bone on a platter, and spoon a little sauce over it, reserving the rest to serve at table in a bowl. Garnish with chopped cilantro, pickled onions, a lashing of your best sea salt, and a grind or five of black pepper. Serve with hot tortillas and side dishes—I always think braised greens go well with pork.