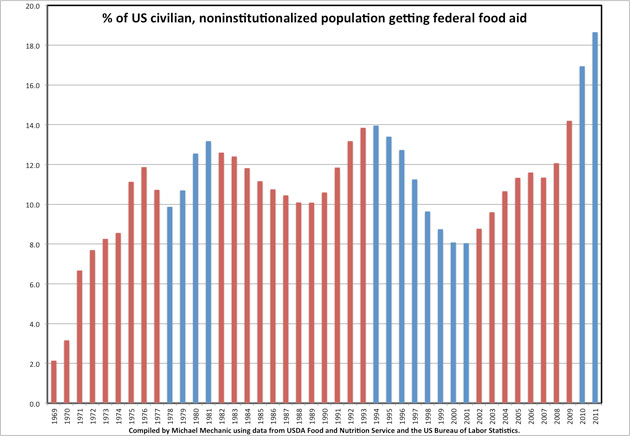 In his South Carolina victory speech, Newt Gingrich laid into President Obama and disparaged him as the “food stamp” president—as if it’s a repugnant notion to help Americans when they’re struggling. In any case, he inspired me to chart some data.

I calculated the percentage of the civilian noninstitutional population—anybody 17 and older who’s neither in prison nor the military—receiving federal food aid. (Click on links for source data; I used the July population figures.) The red and blue bars indicate the party of the president who created that year’s budget. For instance, Obama’s first budget was for fiscal year 2010, which commenced in October 2009. So for the first three quarters of 2009, America was operating on a Bush budget.

So what does this tell us? Well, food stamp use is certainly higher than it’s been in more than four decades. Is that because, as Gingrich claims, Obama is nurturing a culture of dependency? Hardly. It just means that more people are hurting (to the degree that a few have even resorted to illegal activities to pay the bills).

The chart also tells us that the explosion of participation in the food stamp program began with President Bush’s first budget and continued all through his tenure. More Americans signed up for food assistance under Bush than have signed up under Obama—so far, anyway. And if you really want to blame presidents for soaring food stamp use, you should probably also point out that Bush had eight years to turn the trend around—including four years with backup from a solidly GOP Congress—yet failed to do so.

The steepest decline in food stamps came under President Clinton—when Gingrich was House speaker and the nation was going hog-wild with its dot-com boom. President Reagan, Gingrich’s hero, whose deficit spending helped fuel a degree of prosperity, oversaw a decline in food stamp use followed by an increase that left things worse than when he took office.

In short, it’s disingenous of Gingrich, and really kind of insulting to out-of-work Americans, to go after Obama on this account. The candidate is smart enough to know that the number of hungry people seeking help is a pretty good gauge of our economic health. And as the chart makes clear, neither party has a monopoly on the good times.

UPDATE (Jan. 24, 3:41 EST) — This just in. A large and growing share of food stamp households (48 percent) are working households. So much for Newt’s dependency theory.