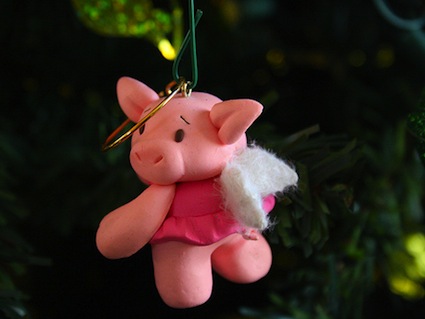 On Dec. 22, while even the nerdiest observers were thinking more about Christmas plans than food-safety policy, the FDA snuck a holiday gift to the meat industry into the Federal Register. The agency announced it had essentially given up any pretense of regulating antibiotic abuse on factory farms, at least for the time being.

Wired’s diligent Maryn McKenna has the background. She reports that way back in 1977—when livestock farming was much less industrialized than it is today—the FDA announced its intention to limit use of key antibiotics on animal farms. The reason: By that time, it was already obvious that routine use of these drugs would generate antibiotic-resistant pathogens that endanger humans.

In the decades since, the agency has ruminated and mulled, appointed committees and consulted experts, all the while delaying making a final decision on the matter. Meanwhile, the meat industry built a multibillion-dollar business based on stuffing animals by the thousands into tight spaces amid their own waste. To keep them alive and growing to slaughter amid such conditions, feedlot operators give their animals daily doses of antibiotics. The FDA recently revealed that factory animal farms now burn through fully 80 percent of all antibiotics consumed in the United States.

With the stealthy holiday surprise it dropped last week (full text here), the agency declared it would forgo actual regulatory action and instead “focus its efforts for now on the potential for voluntary reform and the promotion of the judicious use of antimicrobials in the interest of public health.”

As McKenna demonstrates, the industry has shown no signs it will “volunteer” to cut back on antibiotics. She points to a recent missive from the National Cattleman’s Association that blithely denies mounting evidence that routine antibiotic use on farms is already creating resistant strains that infect people. The FDA’s decision allows the the industry to continue merrily defying science and public health in service of its dodgy business model.

Importantly, the agency did emphasize that the action “should not  be interpreted as a sign that FDA no longer has safety concerns or that  FDA will not consider re-proposing withdrawal proceedings in the future, if necessary.”

That language could be a signal that the FDA is delaying real action until after the 2012 election, in an effort to keep meat-industry “dark money” from flowing to President Obama’s opponent. In 2011, the Obama administration has acted repeatedly to appease agribussiness interests (e.g.,  here, here, and here), after showing at least some backbone initially.

Or the FDA’s equivocations could be the death rattle of a failed three-decade effort to rein in a politically powerful and abusive industry.