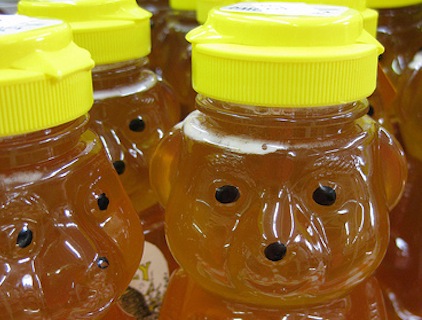 Laundered honey: either grin and bear it, or buy the real article from farmers markets. <a href="http://www.flickr.com/photos/contusion/3870915261/">Coco Mault</a>/Flickr

Peruse the sweetener shelf of a US supermarket, and you’ll find an array of bear-shaped jars glistening with golden honey, all of it priced to move.

Ever wonder why the ongoing collapse of US honeybee populations hasn’t caused a scarcity of honey or a spike in prices? I think the ace investigative reporter Andrew Schneider of Food Safety News might have the answer. In an August investigation, Schneider revealed:

A third or more of all the honey consumed in the U.S. is likely to have been smuggled in from China and may be tainted with illegal antibiotics and heavy metals. A Food Safety News investigation has documented that millions of pounds of honey banned as unsafe in dozens of countries are being imported and sold here in record quantities.

Today, Schneider is back with a new report, already highlighted by my colleague Stephanie Mencimer but worth delving into more.

Schneider rounded up more than 60 samples of honey from retailers in 10 states and the District of Columbia and had them analyzed at a Texas A&M University lab. The result: Three-quarters of the samples were “ultra-filtered”—a process in which honey is “heated, sometimes watered down and then forced at high pressure through extremely small filters to remove pollen, which is the only foolproof sign identifying the source of the honey.”

That last bit is key. When you strip honey of its pollen, it becomes impossible to trace its origins. Chinese honey routinely has been found to contain additives and contaminants. To avoid scrutiny in countries like the United States, China’s honey industry has been funneling its product into other nations like India. The ultra-filtering process appears to be a honey-laundering tool, Schneider reports.

In 2010, the FDA seized 64 drums of imported Chinese honey from a Philadelphia distribution center “because it contained a potent antibiotic that could lead to serious illness or death,” the agency reported in a press release. But Schneider reported that FDA tests at most 5 percent of imported honey. And evidently, dodgy Chinese honey has kept flowing into US supermarkets, duping consumers.

As Schneider put it, “The food safety divisions of the World Health Organization, the European Commission and dozens of others also have ruled that without pollen there is no way to determine whether the honey came from legitimate and safe sources.”

Even our own FDA has ruled that “any product that’s been ultra-filtered and no longer contains pollen isn’t honey,” Schneider reported. But get this: “the FDA isn’t checking honey sold here to see if it contains pollen.” Good thing Schneider is.

On a more upbeat note, while Schneider’s Texas A&M tester found the great bulk of honey found in big-box stores and supermarkets has been stripped of all pollen, the same wasn’t true for product samples from farmers markets, co-ops and “natural” stores, all of which “had the full, anticipated, amount of pollen.” And certified organic honey bought from conventional retailers also showed well. Of the seven samples tested—all of which came from Brazil, Schneieder reported—only one had been utlra-filtered.

In the story, several sources tell Schneider that the only reason to ultra-filter honey is to hide its origins. The process actually decreases quality, because pollen contains protein and trace nutrients. Meanwhile, conventional filtering strips out “bee parts, wax, debris from the hives and other visible contaminants but will leave the pollen in place,” Schneider reported.