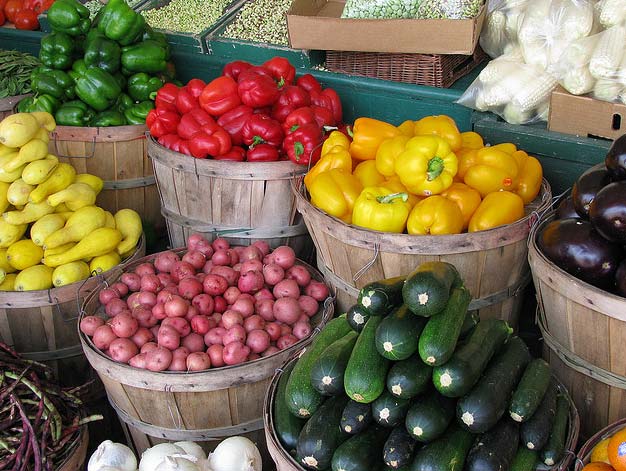 Farmers markets are just one of the sustainable ag programs now on the chopping block.<a href="http://www.flickr.com/photos/nataliemaynor/2539937014/sizes/z/in/photostream/">NatalieMaynor</a>/Flickr

Remember the farm bill, that monstrously complex, twice-a-decade omnibus legislation that shapes US agriculture and hunger policy? You know, the one that Michael Pollan and other sustainable foodies wrote so much about four years ago? Well, it’s back, earlier than expected (the last one doesn’t expire until 2012). And it has found itself caught in the crosshairs of DC budget hysteria—in a way that will likely reinforce the worst, most agribiz-friendly elements of US ag policy and defund the best parts, including programs that help farmers transition to organic and help communities start new farmers markets.

In a story two weeks ago, Politico‘s David Rogers laid out what’s going on. The House and Senate ag committees have created a joint panel of four who are working furiously to do in a matter of days what usually takes more than a year: craft national food and farm policy for the next half-decade. They want to get it done in time to submit it to the budget-slashing “supercommittee,” whose work is scheduled to be done by Nov. 23.

The ag panel seeks to cut farm bill spending by $23 billion over the next 10 years, Rogers reported. The panel hasn’t submitted its proposal to the supercommittee yet—it’s expected to do so early this week—but Rogers wrote that broad outlines have emerged:

Nothing is set in stone, but the leadership anticipates that $14 billion to $15 billion would be cut from commodity supports—or roughly 24 percent from the baseline now projected by the Congressional Budget Office. At the same time, conservation programs would face a $6.5 billion reduction, or a 10 percent cut, and nutrition programs like food stamps would be asked to come up with $4 billion to $5 billion in savings, a less than 1 percent cut.

On the surface, given the austerity fever plaguing Washington, this distribution of cuts might seem to make sense: The commodity programs take a big cut, conservation takes a smaller one, and anti-hunger take a relatively minuscule one.

But in reality, the commodity cuts won’t change the incentives that push farmers to plant millions of acres of farmland with just a handful of crops: corn, soy, cotton, and wheat. That’s because the plan appears to be to replace the current system of direct payments—which pay commodity farmers $5 billion a year based on their acreage historically devoted to subsidy crops—with one based on government-funded revenue insurance that holds farmers’ incomes steady when prices drop.

Like the old system, the new insurance scheme would apply only to farmers who grow those subsidized commodity crops. The new setup would be cheaper than direct payments—projected to cost $3.5 billion per year versus $5 billion—but it continues to ensure that corn and soy will continue to blanket millions of acres: agribusiness as usual, in other words. Indeed, the National Corn Growers Association—the agribiz-linked voice of the nation’s industrial-scale corn farms—has vigorously endorsed the switch.

While the commodity cuts won’t affect the industrial-agriculture juggernaut, the cuts to conservation programs could have real ecological impact. And paring back food stamps at a time when a record 45 million Americans rely on them seems unconscionable.

Moreover, a whole slew of small farm bill programs designed to help farmers transition to organic, communities roll out new farmers markets, AND new farmers with start-up costs, could see draconian cuts. These programs, the result of years of lobbying work from groups like the National Sustainable Agriculture Coalition and the Community Food Security Coalition, have been grouped together by USDA deputy secretary Kathleen Merrigan under the banner of Know Your Farmer, Know Your Food. Ferd Hoefner, policy director at NSAC and a veteran of farm bill fights dating to the ’70s, told me that such programs could lose as much as half of their funding under the current process.

All of that aside, the most egregious thing about the backroom farm bill being slapped together is that it completely shuts out grassroots participation in crafting national food and farm policy. The public farm bill fervor that rose up in 2007-08 has slammed up against a brick wall enclosing secret congressional hearings.

Now, it’s true the supercommittee’s efforts to cobble together a debt deal could fail. If that happens, what becomes of the backroom farm bill now being put together? I put that question to Hoefner. “Anyone’s guess,” he said. But the deal being made now will likely be the “starting point” for negotiations going forward, he added. And that, I think, is bad news for those of us who would like to see significant food policy reform.