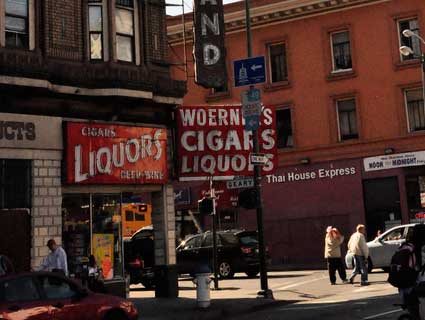 The Young Republicans chapter at U.C. Berkeley managed to drum up a lot of media coverage recently with their “diversity bake sale,” an event intended to demonstrate the oppression of white students enrolled at institutions that consider race during the admissions process. To make their point, the group sold baked goods at varying prices to depending on the race or ethnicity of the customer; whites were charged the most. “The purpose of the pricing structure is to cause people to disagree with this kind of preferential treatment,” said one YR member.

I’m a white person living in San Francisco’s Tenderloin neighborhood, home to a disproportionate number of the city’s non-white residents. Liquor stores, bars and restaurants abound—but there isn’t a proper grocery store in my neighborhood. The Japantown Safeway is probably the closest to me, but it’s no small distance if you don’t own a car. Bicycling can work, but after an unfortunate encounter with a rogue taxi on the return trip I have opted to get my groceries delivered instead of schlepping a lot of heavy food on my bike.

Delivery is a good option for me, but it costs about $8 and only makes economic sense if you can order $100 or so worth of groceries at a time. This requires access to an efficient fridge. Many housing units in the Tenderloin have no fridge or only a mini-fridge that can’t hold very much or freeze anything. And when you need a decent meal right away, the high prices at the corner store or a restaurant are the only option. As Mark Bittman recently pointed out, cooking is actually cheaper than eating junk food—but it’s pretty tough to pull off if you’re living in an SRO hotel room.

All of this means that my neighbors and I actually pay more for the same groceries you’d find in wealthier, whiter parts of the city or out in the suburbs. Race is a major factor in determining where you live, and therefore the price you pay for basic foods, baked or otherwise—and it’s the generally poorer, non-white people who pay more. The Tenderloin isn’t even the most underserved neighborhood in San Francisco—that’s Hunter’s Point, a black enclave that the USDA classifies as an official “food desert.”

This is exactly the kind of real-world inequality that institutions like Berkeley are trying to acknowledge in their admissions policies. People are financially squeezed by racial discrimination every day—but they aren’t likely to be young Republicans.