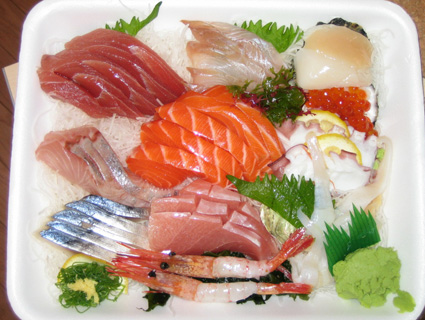 I call myself a pescatarian, though when I do choose to layer lox on my bagel or slurp the occasional oyster, I prefer responsibly sourced seafood, or at least to know exactly what I’m eating. And sometimes when sitting down to a sushi dinner, that’s not exactly clear. To everyone but the most discerning epicure, pink fish can be pretty easily mistaken for other types of pink fish. So it came as no comfort to read Consumer Reports‘ new investigation, “Mystery Fish,” which found that more than 20 percent of seafood purchased at restaurants and stores in three US states was improperly labeled or identified. Among the most mysterious meats was red snapper, which, after going through DNA matching during this particular investigation, could never be positively identified as such.

Consumer Reports sent 22 samples of “red snapper” to an outside lab for DNA testing, where along with other seafood samples, their genetic sequences were compared with standardized gene fragments. Eight red snappers were deemed as possible DNA matches, but the rest were unidentifiable or simply mislabeled.

Another issue that cropped up was vague labeling. Halibut, a popular choice for fish tacos in my kitchen, can be more environmentally friendly depending on its ocean of origin. “Pacific halibut has healthier populations,” writes Consumer Reports, but “labels don’t have to distinguish” between Pacific and Atlantic. In the study, eight samples labeled just halibut were Atlantic halibut, the more overfished breed, and four stores told Consumer Reports’ shoppers that Atlantic halibut was Pacific.

A recent investigation by Oceana came up with similar statistics: 1 in 5 fish samples they tested from stores in Boston were mislabeled.

This poses a huge obstacle for consumers trying to make responsible choices about which fish to fry. Seafood guidelines, such as the Eco-Best list from the Environmental Defense Fund or The Super Green List from Monterey Bay Aquarium’s Seafood Watch, prove helpful in ascertaining which types of fish are most likely sustainably caught and low on harmful contaminants like PCBs and mercury. But if I’m not even sure what I’m buying, then trying to avoid albacore because of its mercury levels, for instance, becomes tricky.

So what’s to blame for all these misidentified fillets? Seafood fraud (mislabeled, substituted, or short-weighted items) plays a big part in the confusion. In a report (PDF) out in May, Oceana found that while 84 percent of seafood eaten in the United States is imported, only 2 percent is inspected and only 0.001 percent specifically for fraud. FDA experts told Consumer Reports that it’s the responsibility of state and local agencies to regulate food stores and restaurants. But in the three states investigated in “Mystery Fish”—New York, New Jersey, and Connecticut—state officials reportedly said that their inspectors “aren’t trained to differentiate among fish species and that they focus their limited resources on food safety.”

A new Senate bill, “The Commercial Seafood Consumer Protection Act,” aims to stop cases of seafood fraud by encouraging federal agencies to cooperate with each other and increase testing and regulation of imported seafood. Also on the list of the bill’s to-dos: simply creating a more standardized list of names for fish in order to minimize confusion.

To avoid mystery fish, Consumer Reports suggests asking a lot of questions about the fish you intend to buy (Where was it caught? Is it in season? What specific type of halibut is it?), which may encourage managers and chefs to become more conscious about where they’re sourcing their fillets. Another tip: Avoid suspiciously cheap fish. When “Mystery Fish” investigators bought “grouper steaks” for $5.60 a pound instead of the normal $9.99, tests revealed that the fish was actually tilefish. With three times as much mercury content as grouper, women of childbearing age (like me) are supposed to avoid tilefish altogether. Which makes me want to settle for an obvious and easily identified oyster, but I’m not sure how much pink and white sashimi I’ll be ordering in the near future.