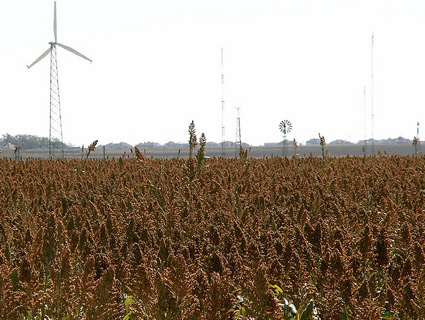 The USDA had a new report up on Wednesday breaking down the percentage of residents in each state who lack secure sources of food—which is to say, the number of people for whom going hungry is an everyday concern. Here’s the thrust of it:

An estimated 85.5 percent of American households were food secure throughout the entire year in 2010, meaning that they had access at all times to enough food for an active, healthy life for all household members. The remaining households (14.5 percent) were food insecure at least some time during the year, including 5.4 percent with very low food security—meaning that the food intake of one or more household members was reduced and their eating patterns were disrupted at times during the year because the household lacked money and other resources for food.

That’s not good, and the bad news is that the general trend is in the wrong direction. Only a handful of places (DC, New Mexico) have seen their food security numbers improve over the last decade. The Great Recession contributes to this, but the trend is clear without it, too. It also brings with it some long-term issues; food insecurity makes it harder to plan nutritionally sound meals, which in turn opens the door to a range of potential health consequences.

Mississippi ranks last, with 19.4 percent of residents reporting that they’re food insecure. Number two? Rick Perry’s Texas, at 18.8. That’s not meant as a cheap shot; it was a bad state for food security before Perry was Governor and it’s still a bad state for food security. Via the Dallas Morning News, the USDA’s Kevin Concannon credits Perry’s health and human services appointee with “improving the training of state eligibility workers and harmonizing efforts with nonprofit food banks,” so credit where credit’s due. But at the same time, conditions have gotten worse, and they’ve gotten worse relative to other states—even states that seemed to feel the recession a lot worse, like Florida.

At the GOP presidential debate at the Reagan Library, Perry was asked point-blank about why his state has more uninsured citizens than anywhere else in the country. He ducked it entirely—and when former Speaker Newt Gingrich was asked for his thoughts, he blasted the moderator, Politico‘s John Harris, for trying to drive a wedge through the field. But it’s a serious question that gets at the heart of Perry’s governing philosophy: Does government have an obligation to address these kinds of problems, or should it just “get out of the way” and hope a strong economy lifts everyone up? Perry has tried the second approach; unfortunately, it doesn’t seem to be working.

Update: Here’s a map from the agency charting food insecurity across the country: 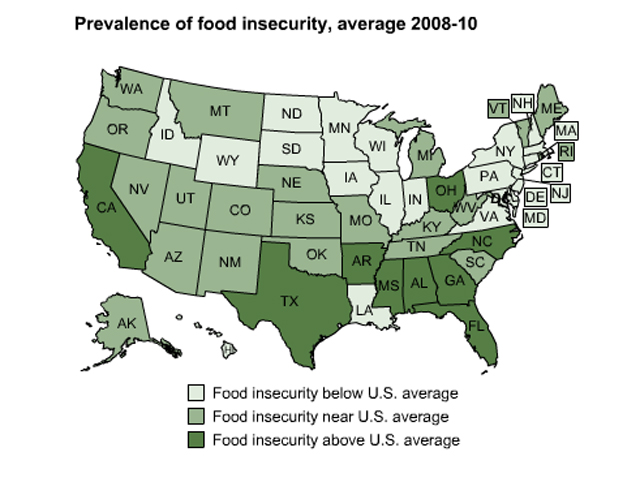 Courtesy of the USDA