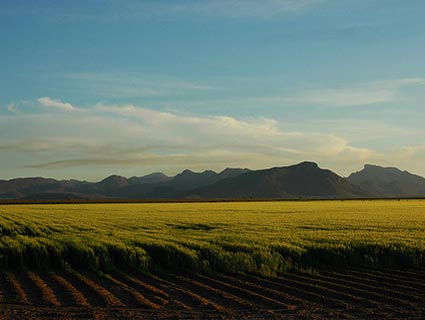 As I wrote a few days ago, Monsanto has been publicly flaunting its effort to develop high-tech patented seeds to “feed the world” amid climate change and resource scarcity. These wonder seeds, designed to grow in hot, dry conditions, are just around the corner, Monsanto says. And without them, millions will starve, the company implies.

Meanwhile, people in Gaza, already facing a hot, water-scarce climate, are turning to organic agriculture to feed themselves. And it seems to be working. “Gaza doesn’t need Monsanto’s wonder seeds,” I concluded in my post.

Well, it turns out that Mexico doesn’t either. A study (abstract; I ponied up $10 to rent the full paper for two days—so much for public research) recently published in the Proceedings of the National Academies of Science (PNAS) look at small-holder farmer communities in throughout Eastern Mexico, in variety of micro-climates, from highlands to lowlands.

Here’s how the researchers describe the communities they studied:

The small-scale maize farmers in this study include both indigenous and Mestizo [of mixed European and indigenous  heritage] households. They have diversified livelihoods, producing multiple crops, fruit trees, and domesticated animals both for self-consumption and for the market. Farmers also engage in nonfarm activities. Maize, however, continues to play a key role in their livelihoods, having multiple uses, both for consumption and sale.

While Monsanto and a a few larger companies dominate the seed market for US corn farmers, the company has no traction at all in southern Mexico. The authors describe how the farmers they studied get their seeds:

[Most seeds are] saved from their own farms. Seed obtained from outside the farm  accounts for less than a third of seed in any of the agro-climate environments, and most of this seed is obtained from the farmers’ social network of family, neighbors, and friends. Only a minority of seed sourced off-farm comes from stores, the government, or strangers. The role of the formal seed system, therefore, is minimal, even though there have been government programs to disseminate improved seed.

The researchers hypothesized that such “traditional maize seed systems” would fail under standard models of climate change—that the farmers wouldn’t have access to seeds adapted to changing conditions, and would face either chronic crop failure or the prospect of having to go outside of their networks to buy seeds—for example, to Monsanto and its wonder seeds.

Instead, what they found in modeling for climate change was that there is so much genetic diversity among the corn varieties available to these farmers within their own communities that they will likely be able to adapt just fine to climate change without outside help.

To put it another way, while Monsanto spends billions of dollars trying to develop and market climate-ready wonder seeds, these farmers have already developed sufficient genetic diversity within their farming systems that they don’t need Monsanto’s wonder seeds. The only exception is high-altitude areas, but these regions, too, could get the seeds they need from within national borders, and won’t likely need to tap the global seed market. The authors conclude that:

Maize landraces in Mexico show remarkable diversity and climatic adaptability, growing in environments ranging from arid to humid and from temperate to very hot. This diversity raises the possibility that Mexico already has maize germplasm suitable for predicted environments, i.e., that there are current analogs in the country for the ‘”novel” crop climates predicted by 2050.

Now, one might be tempted to discount this conclusion if it came, say,  from some hippie ecologist at UC Santa Cruz. But one of the study’s authors hails from the UN’s Food and Agriculture; and another works at International Maize and Wheat Improvement Center (CIMMYT). The CIMMYT was founded in Mexico by Norman Borlaug—founder of the green revolution.