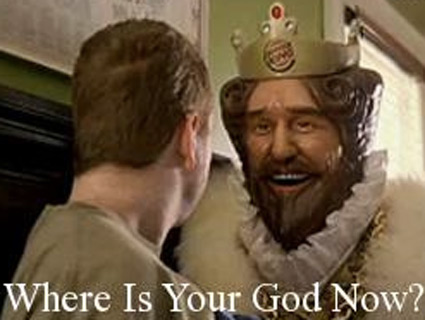 An image of "The Burger King," used in an Internet meme with the "Where is your God now?" tag line.<a href="http://www.flickr.com/photos/invisible_al/89845666/">invisible_al</a>/Flickr

“The King” has just abdicated his television throne. On Friday, Burger King announced that it has discontinued appearances of its sneaky, off-putting, and large-headed mascot, in an attempt to revamp their advertising strategy.

According to the Associated Press, the character’s farewell is part of the struggling fast food giant’s effort to “refocus its marketing” in order to reach new customers after declining sales. The new series of ads—produced after Burger King changed advertising agencies in July—will start airing this weekend and will keep the focus on BK burgers.

Honestly, the overthrow of the King is long overdue. The character, which debuted in 2003, has been blamed before for the company’s sagging profits by such sources as The Atlantic and Gawker, which noted that the commercials were “bizarre” and “vaguely disturbing.”

Even Friday’s impartial AP obit makes the King seem like a huge, law-breaking nuisance that nobody’s going to miss, noting that he “recently has become a more prevalent and somewhat creepy presence in ads—showing up in people’s beds and peeping in their windows.”

Still, the mascot managed to take on a life of its own over the last seven years, appearing in several Xbox 360 games, inspiring satirical Internet memes, and even getting its own Simpsons incarnation.

To honor the toppling of the long-ruling monarch, here is a quick video tribute to the thoroughly unsettling ad-culture fixture. Because all of the following ads include situations that in real life would result in pepper spray and arraignments, it’s rather surprising that Burger King stuck by him for nearly a decade.

Here’s a 30-second ad in which he gets into bed with a complete stranger without the man’s consent:

In this video, his new target—alone, unsuspecting, in the dark, and at an ATM—understandably assumes His Majesty is there to attack him:

Below, “the King” assumes the role of a trespassing Peeping Tom:

And at the end of this one, His Royal Highness nearly commits a hate crime: