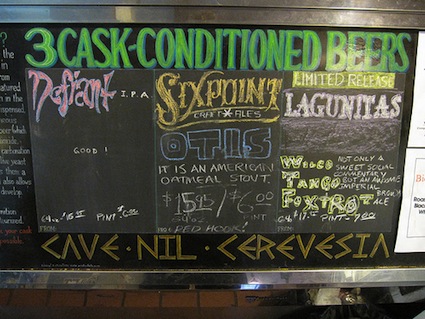 The selection of cask-conditioned beers at Brooklyn's glorious Bierkraft. <a href="http://www.flickr.com/photos/brostad/4554347366/sizes/m/in/photostream/">Bernt Rostad</a>/Flickr

Last week, I posted on what I think of as the beer paradox: that the industry is dominated by two swill-producing giants, and yet excellent craft beer proliferates.

To me, the beer paradox is about the limits of corporate power and the potential of grassroots organizing. Some readers had a different take on the phenomenon, and let me know on Twitter and in their own blogs. I’d like to respond to a few.

• The first involves corporate power. In progressive circles, there’s a tendency to see corporations as all-powerful entities that dominate our lives. “Wow. You can’t escape the corporate beer Matrix,” one reader commented on Twitter after reading my post. But what I was trying to show is that the corporate “Matrix” is often like Oz’s wizard: powerful, yes, but only as omnipotent as we let it be.

Anheuser-Busch owns a grotesque 50 percent of the US beer market, but that hasn’t stopped excellent small-scale craft breweries in my area from cropping up. Within 100 miles of me in rural Western N.C., Craggie, Highland, Hoothills. Green Man, Pisgah, and Catawba Valley all churn out good-to-excellent small-batch beer. People in most areas of the United States can make a similar list. Escaping the beer Matrix may take a bit of effort, but it’s certainly not impossible.

• Other readers fixated on the deregulation aspect of the story—the fact, as I noted, that Jimmy Carter eased Prohibition-era restrictions on home-brewing supplies in the late 1970s, helping spark the craft-brew revival. These folks want to read the beer paradox as a fable for how regulation is inherently evil and deregulation is inherently good. The libertarian food-advocacy group Keep Food Legal needled me on Twitter along these lines.

It’s true that Carter’s move on behalf of home brewers helped push along the craft-brew revolution, as did the state-by-state unwinding of rules preventing the opening of brew pubs, which largely happened in the 1980s and ’90s. But in both cases, the regulations in question were clearly misguided in the first place—they were remnants of Prohibition, designed to keep people from drinking at all. I join my libertarian friends in opposing clearly misguided, archaic regulations.

But even archaic regulations have their place. The most famous beer regulation of all is Germany’s illustrious Reinheitsgebot, or Purity Law, which governed that country’s beer production from 1516 until a slightly more expansive version came into effect in 1993. The Reinheitsgebot decreed that products marketed as beer could contain only the following ingredients: water, malted barley and hops. (Yeast was originally omitted, because in the 16th century, the role of microbiota in the fermentation process wasn’t understood.)

Granted, the Reinheitsgebot was always problematic. It prevented German beer makers from engaging in the kind of experimentation that took place in Belgium, home of delightful fruit-flavored beers that would have run afoul of the purity law.

But it saved German drinkers from the truly bad beer that plagues most of the globe. A 2006 BBC story listed additives typically found in corporate beer, none of which you’ll find in the stuff brewed in Germany: betaglucanase, ammonia caramel, rhoiso-alpha acids, sulphur dioxide, protease, amyloglucosidase, propylene glycol alginate, and silicone. Nor will German beers ever be dumbed down with cheap filler grains like corn and rice, which are part of the reason American brews like Bud and Miller taste so insipid.

So while I happily grant that deregulation played a role in the craft-beer revival, the beer story does not prove that all regulations are bad and all deregulation is good.

• Finally, Center for American Progress blogger Matt Yglesias used the beer paradox to tweak progressives for what he sees as their reflexive support for unions—or better said, for not taking their reflexive support for unions to the logical extreme by happily gulping Bud. What Yglesias really seems to want is for progressives to take their beer snobbery to its logical end by embracing anti-unionism. Yglesias writes:

You may not like Miller or Bud Light, but Miller and Anheuser-Busch both run unionized breweries. … one consequence of the cartelization of the American beer brewing industry was to generate monopoly profits for the large breweries. This was good not just for “Miller executives” but for all the stakeholders in the enterprise. When a unionized firm is in a non-competitive marketplace, the union is in a strong position to force the firm to share some of the monopoly rents with the workforce. When the market becomes more competitive, not only does the unionized firm lose market share but the union in general loses leverage.

But his analysis is too clever by half. Yglesias is correct that large, market-dominating corporations went hand-in-hand with unions in the ’50s and ’60s, the era of “what’s good for General Motors is what’s good for America.” A buoyant economy lifted profits, and corporations happily passed some of that along to workers in the form of wage increases. Labor and capital got along (generally) quite well.

But as Yglesias knows, all of that all of that fell apart in the ’70s, and that by the ’80s, a new profit regime had established itself. In the new order, companies still scrambled to get as big as possible—in fact, consolidation fervor exploded—but the name of the game became increasing profits by cutting costs. And one of those costs was labor. Cozy relations between Big Business and Big Labor evaporated. Union busting became the order of the day. For an example of how big, consolidated industries now treat labor, check out meatpacking, where just a few companies—Cargill, JBS, Smithfield, Tyson—dominate. Things have gotten so dreadful for meatpacking workers that Human Rights Watch saw fit to release a scathing report on the topic on 2004. What’s good for Tyson is part of what’s killing America.

Yglesias claims that craft brewing contributed to a similar trend in the beer industry by imposing competition, but that really doesn’t hold up. Despite the explosion in new breweries since 1980, craft beer sales now account for just about 7.6 percent of the US beer market; Big Beer still owns the rest.

It’s true that labor has been dramatically weakened at the mega-breweries, but that has little to with some liberal’s choosing a growler from the local brewpub over a case of Bud from the unionized factory. What has hobbled the brewing unions is actually the precise opposite of the buy-local impulse: the globalization of beer. A huge Belgian company called InBev (which owns nearly 20 percent of of the global beer market) bought  Budweiser-maker Anheuser-Busch in 2008. Here’s how The Wall Street Journal described the transition:

It is just one piece of a sweeping makeover of the iconic American brewer by InBev, the Belgian company that bought Anheuser-Busch last fall. In about six months, InBev has turned a family-led company that spared little expense into one that is focused intently on cost-cutting and profit margins, while rethinking the way it sells beer. The new owner has cut jobs, revamped the compensation system, and dropped perks that had made Anheuser-Busch workers the envy of others in St. Louis.

In a post on Grist a while back, I described how small-scale breweries are creating alternatives to the brutal economics of unchecked global capitalism. That, rather than union-busting, will likely be the legacy of the the craft-brew revolution.