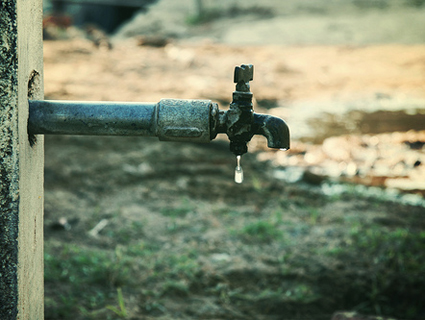 Despite my utter dependence on an iPhone to find even my own apartment, I still would rank water above technology on a list of priorities. Still, in some developing countries, communication flows more steadily than water. The numbers can be staggering. In Afghanistan, cellphone subscriptions boomed from zero in 2000 to 13 million in 2010. For every 100 people worldwide in 2010, 78 owned a cellphone. That’s up from a mere 12 in 2000. By contrast, the statistics for basics like food and water can be hard to swallow. In rural Ethiopia, 74 percent of the population still relies on unimproved water, which includes surface water and wells unprotected from bird droppings.

Social entrepreneur Anu Sridharan sums it up: “There are more cellphones than toilets on the planet,” she said. “If you look at emerging economies like Mexico and Brazil, technology we have, but basic resources we don’t. And it’s a problem.”

Recently, entrepreneurs such as Sridharan have tried to bridge the uneven boom between utilities and technology. Just last month, the Knight News Challenge funded her potential solution to at least one aspect of the problem by granting $375,000 to NextDrop, Sridharan’s crowdsourcing project that notifies residents of Hubli-Dharwad, Karnataka, India, when one of their local water valves begins to flow. The idea emerged out of a UC—Berkeley civil engineering project. The NextDrop team’s plan for distinction is simple: collaborate with local governments rather than running strictly as a business.

“We’re not trying to recreate the wheel here,” Sridharan says. “We want to affect the most people, and to make the most change happen, you have to work with governments and utilities.”

Hubli, with a population of one million (“small for India,” Sridharan says), contains poor workers and women dependent on water valves, and they often spend hours waiting for the stream. Only 10 percent of Hubli residents have access to a 24-hour water supply. But though its residents lack running water, many have cellphones. NextDrop hopes to even the score by sending SMS messages to residents 30-60 minutes before their water valve turns on. That way, they no longer waste their most valuable resource: time.

The team plans to expand NextDrop worldwide, and has already been approached by other Indian municipalities, Sridharan says. But the project, now in the testing phase, still has some kinks. Just last week, the “valveman,” who turns on the water valve and notifies NextDrop so they can text Hubli residents, revealed one weakness in the chain. “He forgot to call us.” In our excitement over new gadgets, it can be easy to forget that we still rely on humans—and for that matter, water—in order to use them effectively.