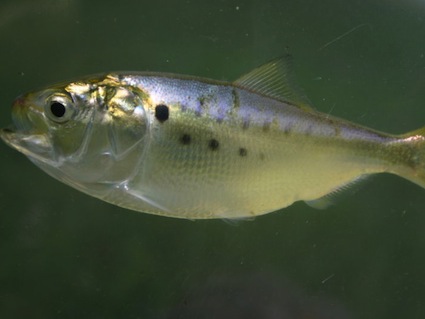 So, there’s this company called Omega Protein, and it seems intent on catching as much as it possibly can of an obscure, tiny, practically inedible fish called the Atlantic menhaden.

From Omega Protein’s perspective, hoovering up menhaden like they’re dust bunnies is a great idea. The company’s entire business model hinges on transforming the oily fish into everything from livestock feed to omega-3 pills for people. In fact, it owns a monopoly on Atlantic menhaden fishing and processing—and has been doing just that for years. The stock market values Omega Protein at a cool quarter-billion dollars.

For the health of the ecosystem along the East Coast, though, declaring open season on the menhaden really, really sucks, as Alison Fairbrother and Randy Fertel say in their recent Gilt Taste piece, “The Most Important Fish in the Sea.” All along the eastern shore, menhaden have entered a phase of calamitous decline. Stocks have plunged 88 percent in the past quarter century, the authors report. As Omega Protein sucks them out of the ocean, things are getting quite out-of-whack down below. Fairbrother and Fertel explain:

[T]heir nutrient-packed bodies are a staple food for dozens of fish species you have heard of, as well as marine mammals and sea birds. Located near the bottom of the food chain, menhaden are the favored prey for many important predators, including striped bass and bluefish, tuna and dolphin, seatrout and mackerel.

And that’s not all. “Menhaden are filter feeders, swimming with their mouths open and straining phytoplankton (algae) and other particles with their gills,” Fairbrother and Fertel report. The little fish “have been removing damaging particles from our waters since time immemorial.”

Thus menhaden have what I call ecological leverage. That is, if you fish them into oblivion, you’re not just destroying a single species; you’re also threatening to unleash a cascading set of effects that could lead to full-on ecosystem collapse. Other examples of ecological leverage include coral reefs, which act as engines of oceanic biodiversity but are under attack from a variety of forces, and tropical rainforests, which teem with biodiversity, too, and also help stabilize global climate by trapping vast amounts of carbon. We mess with ecological leverage at our peril.

As Fairbrother and Fertel show, menhaden are already displaying their ecological leverage on the Atlantic Coast:

One sign that points to the scale of the problem is that species like striped bass that normally feed on menhaden are displaying symptoms of malnourishment and disease. Seatrout are near their lowest population point on record, in part because of a lack of menhaden. When faced with the loss of both seatrout and menhaden as food, striped bass have been turning to other cherished delicacies. “Striped bass will feed on blue crabs and lobsters when they can’t get enough menhaden. We are seeing increased mortality of juvenile lobster and blue crabs,” [a prominent fisheries scientist] says.

Their role as filter-feeder is already being missed too. The Chesapeake Bay once teemed with menhaden; their absence, due to overfishing, probably contributes to the vast algae bloom that blots out sea life there every year, fed by runoff from factory chicken farms. If this key bottom feeder keeps being depleted by industrial fishing, we could see the entire Atlantic coastal system transform into a similar dead zone.

To me, ecological leverage is a terrifying concept. Watching it play out is like watching two trains hurtle toward each other on a single track. But just as it works destructively, ecological leverage could be brought to bear for the good too. When you can identify a vital resource in an ecosystem, you can choose to pillage it to maximize profit as it dwindles, or you can protect and nurture it. If annihilating the menhaden can destroy the coastal ecosystem, then reviving it can restore resilience and abundance.

And all along the East Coast, states are trying to do doing just that. Every state but one—Virginia—has banned industrial menhaden fishing Fairbrother and Fertel report. And Virginia is now where Omega Protein makes its entire annual menhaden haul. To keep Virginia friendly, the company “has been a generous and frequent financier of both Democratic and Republican legislators” there. This year alone, six bills have been introduced in the Virginia legislature to protect menhaden. “All were defeated handily,” Fairbrother and Fertel report.

Omega Protein profits nicely from it menhaden grab: The company’s annual harvest is worth $168 million, Fairbrother and Fertel report. But the toll the company is exacts on coastal waters—and everyone who relies on them for jobs and nutrition—is incalculable.

For an in-depth look at Omega Protein and its owner, who turns out to be a crony of George H. W. Bush, see H. Bruce Franklin’s 2006 Mother Jones blockbuster “Net Losses: Declaring War on the Menhaden.”